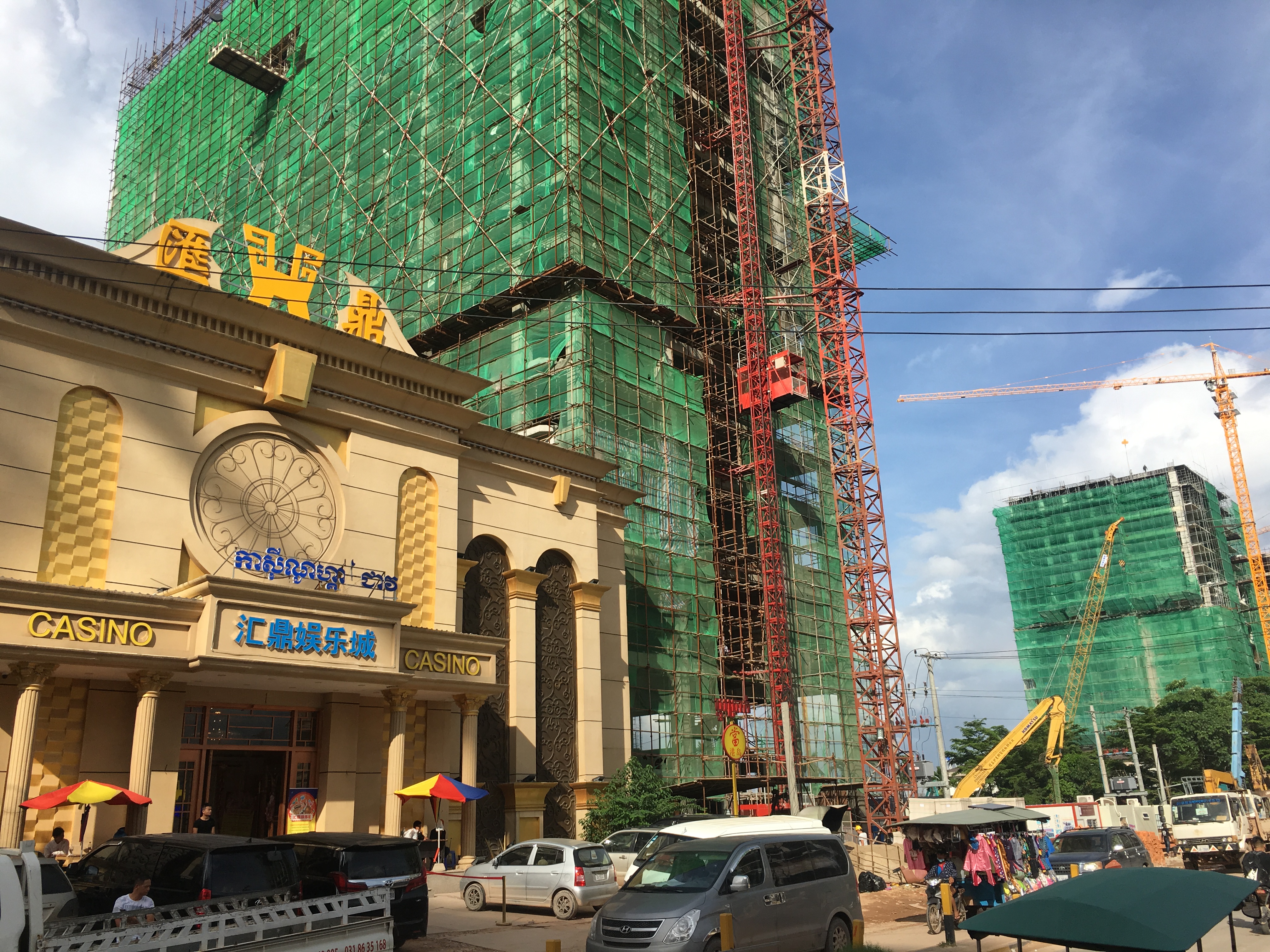 A Chinese Casino next to other construction projects in Sihanoukville, Cambodia. Photo credit: Damon Lim.

In May 2019, I visited Myanmar and Cambodia to conduct fieldwork as part of Director Angel Hsu’s research on “Urbanization in Southeast Asia.” Since the start of the year, researchers at Data-Driven Lab have been using satellite images and open social media data to classify urban land use change in Southeast Asia, especially through the Belt and Road Initiative (BRI). Southeast Asia is a region that is urbanizing rapidly and it is crucial to study the drivers of its growth to create sustainable policies and planning processes.

Cambodia is considered China’s strongest ally in Southeast Asia and Chinese investments into Cambodia have increased tremendously in recent years. In Phnom Penh, Cambodia’s capital city, Chinese investments such as high-end condominiums, shopping malls, and infrastructure projects can be easily found throughout the city.

Koh Pich (which translates to “Diamond Island”) is one such example. Koh Pich is a 75-hectare artificial island located close to Phnom Penh’s downtown. It is filled with high-end mansions, condominiums, and other projects, which are largely occupied by Chinese investors and individuals. 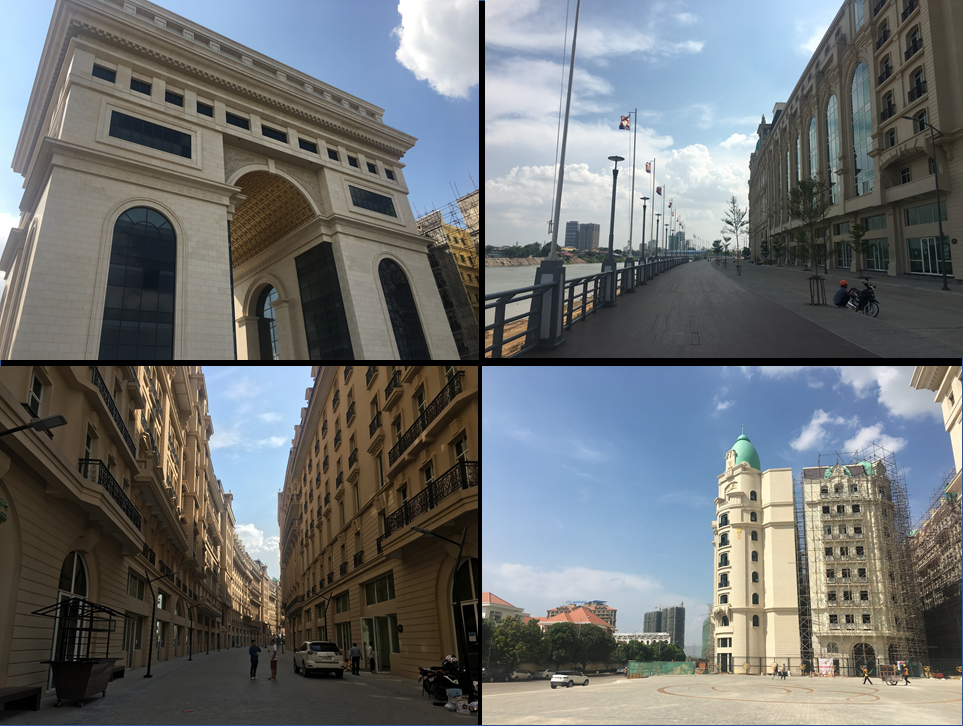 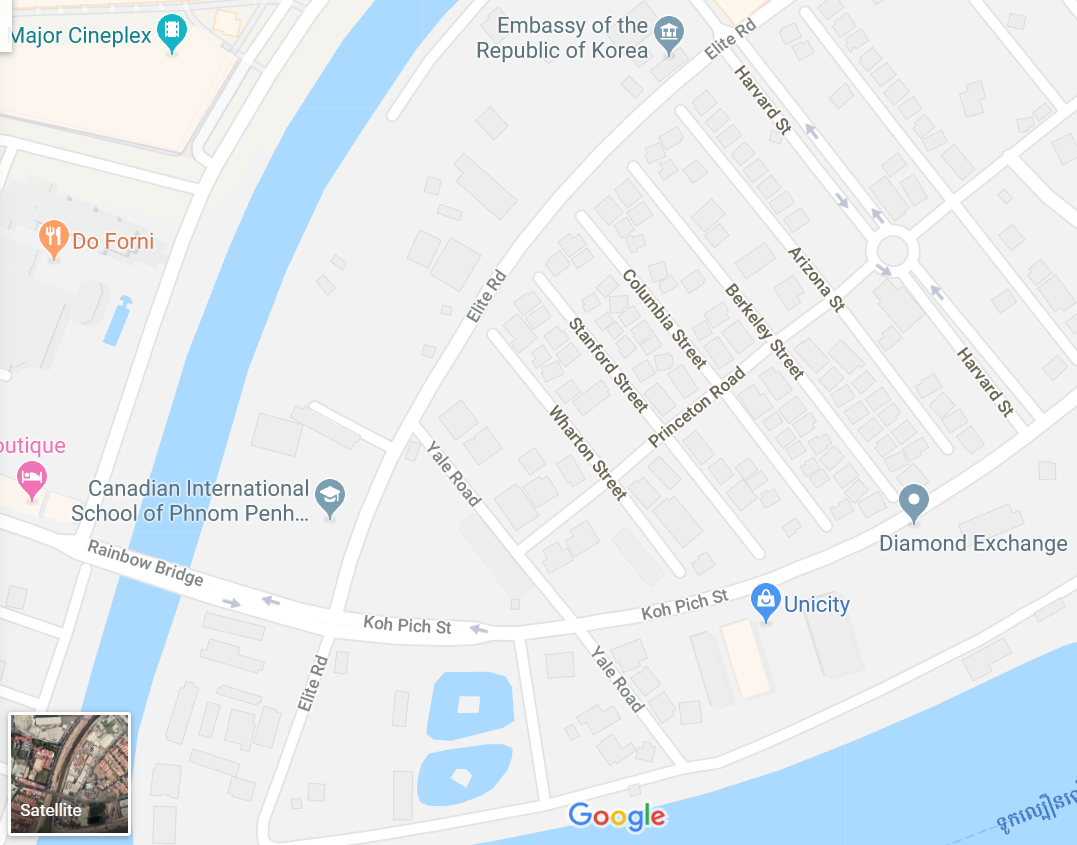 A screenshot of Koh Pich taken from Google Maps.

On Koh Pich, many of the streets are named after elite education institutes in the United States, such as Yale and Stanford. When I visited, I saw that high-end, luxurious mansions occupied most of these exclusive spaces. There are also high-end shopping centers and an international school for the island’s residents. On Koh Pich Street there is even a condominium project that adopts French architecture, showing how cities borrow ideas and inspiration from each other. Below is a 360-degree image of the street.

In order to fulfill the demand for space in Phnom Penh, some lakes in the city have been filled to create artificial land. One example is Boeung Kak, which was still relatively undeveloped when I visited. There were a few condominium projects nearing completion, though work had barely begun on most of the area. As Southeast Asia urbanizes, it is almost certain that other cities will also turn towards land reclamation to create space in high-value cities, resulting in the loss of natural wetlands and biodiversity while exacerbating the risk of severe floods. 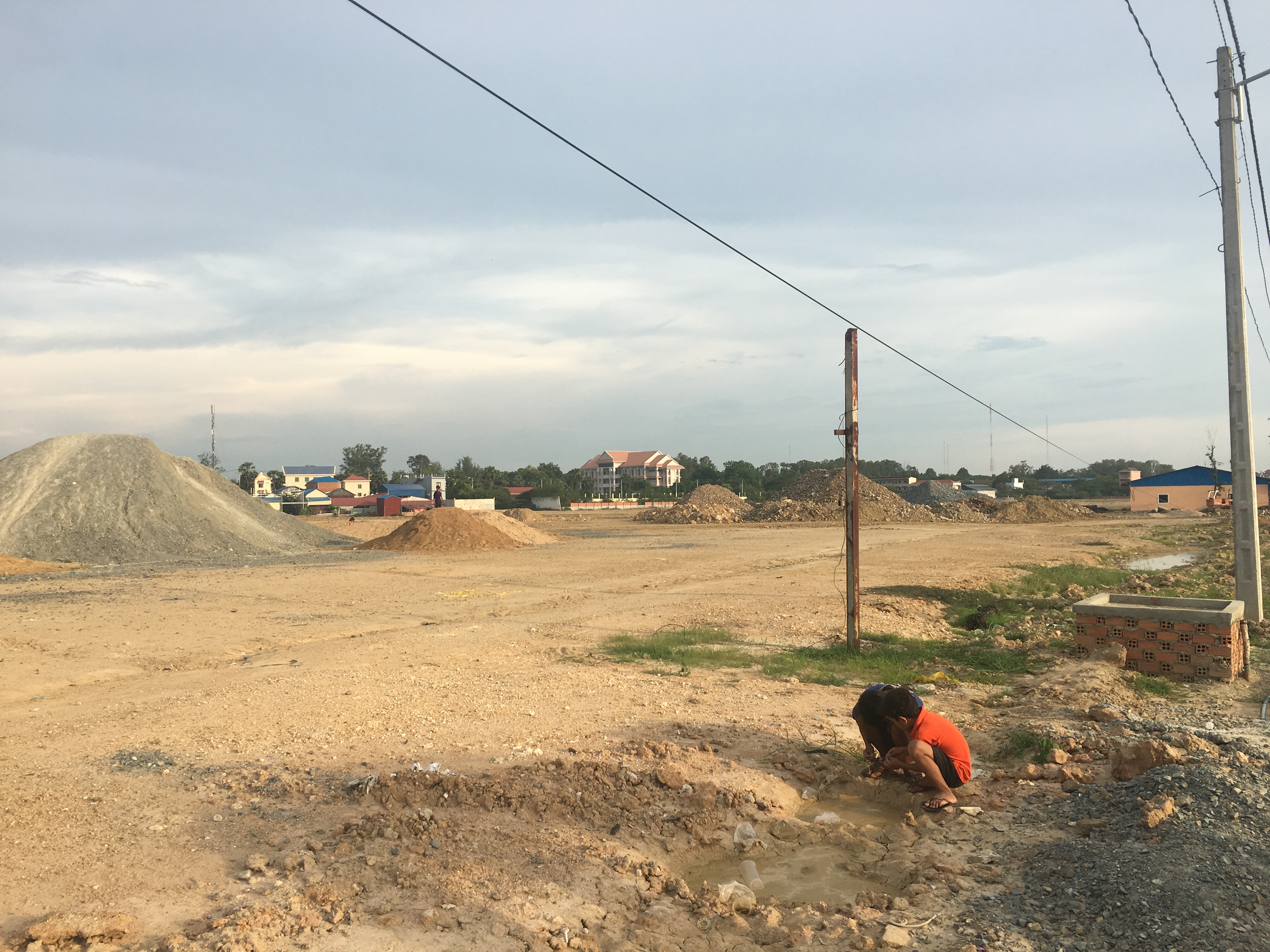 The Boeng Tmat lake has recently been filled, though no construction work has begun yet. Photo credit: Damon Lim.

I also visited Sihanoukville (formerly Kompong Som), a coastal city in Cambodia. Sihanoukville used to be a sleepy seaside town that mainly drew in western tourists and backpackers. Given its strategic maritime location and scenic views, Chinese investments have flooded the city in recent years. A notable BRI project is an expressway to Phnom Penh, which would improve connectivity and material flows between the two cities. 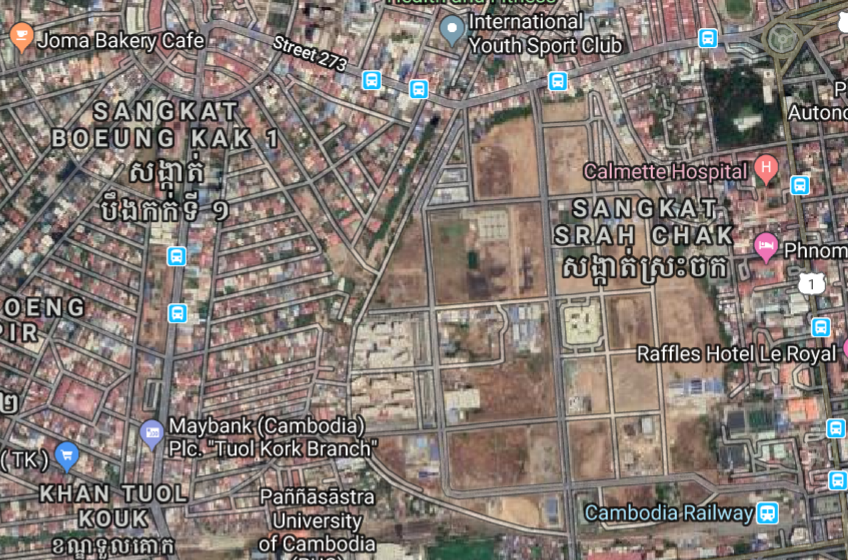 What is striking about Chinese investments in Sihanoukville is the massive number of casinos – a piece by The Guardian counted more than 70 casinos in Sihanoukville at the end of 2018. These casinos range from massive, luxurious enterprises to small, dingy rooms set up by Chinese investors. As it is illegal to gamble in China, Chinese citizens have to go abroad or to special administrative regions, such as Macau, in order to gamble. 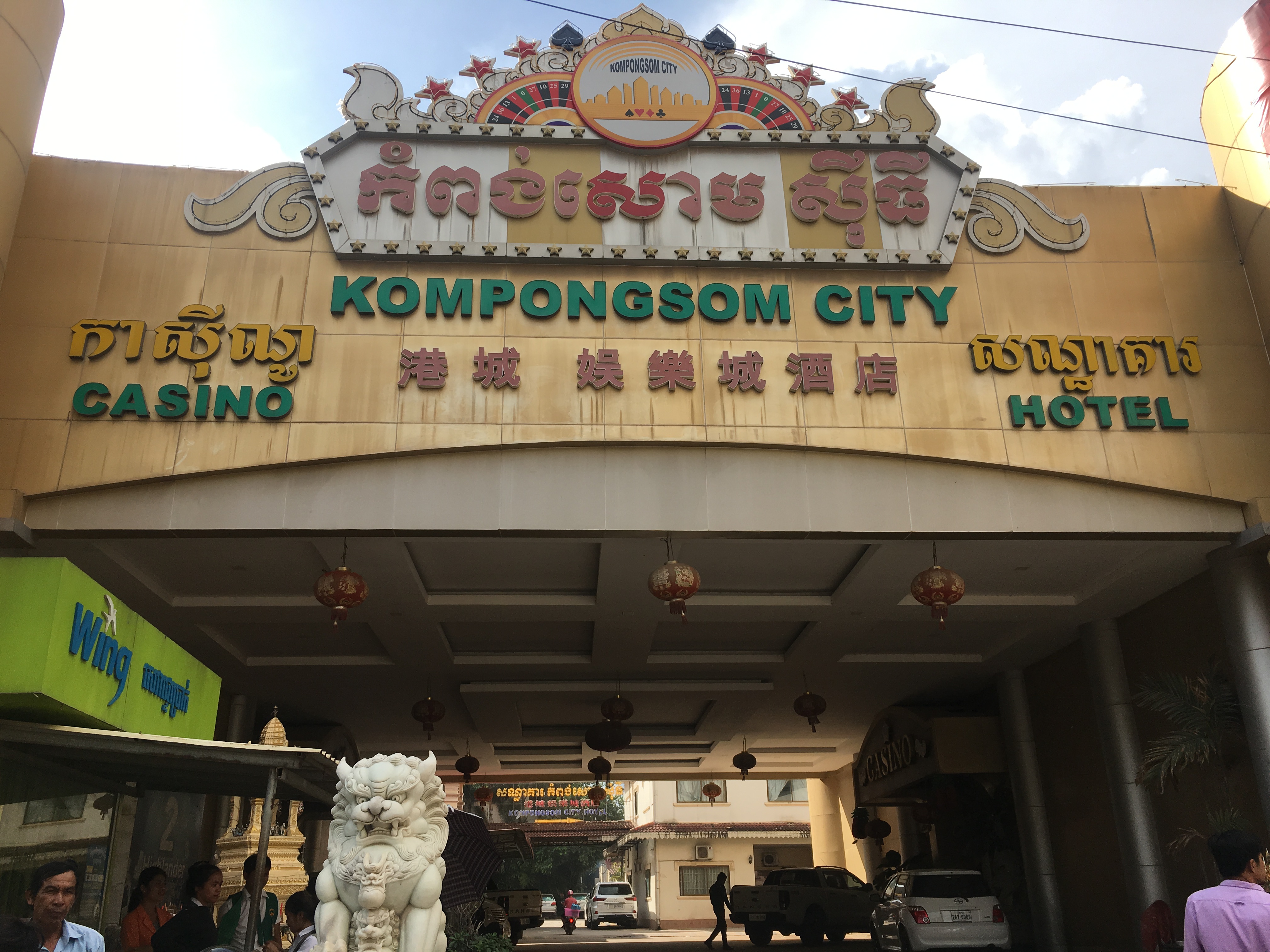 Cambodia is already a popular tourist destination for Chinese tourists. However, in Phnom Penh, a Malaysian casino already has the exclusive right to operate in the city until 2035, explaining why so many Chinese investors and corporations have set up casinos in Sihanoukville catering to Chinese tourists. In most of the casinos I visited, games were almost conducted exclusively in Chinese, and I was told that locals and western visitors would not be allowed in. 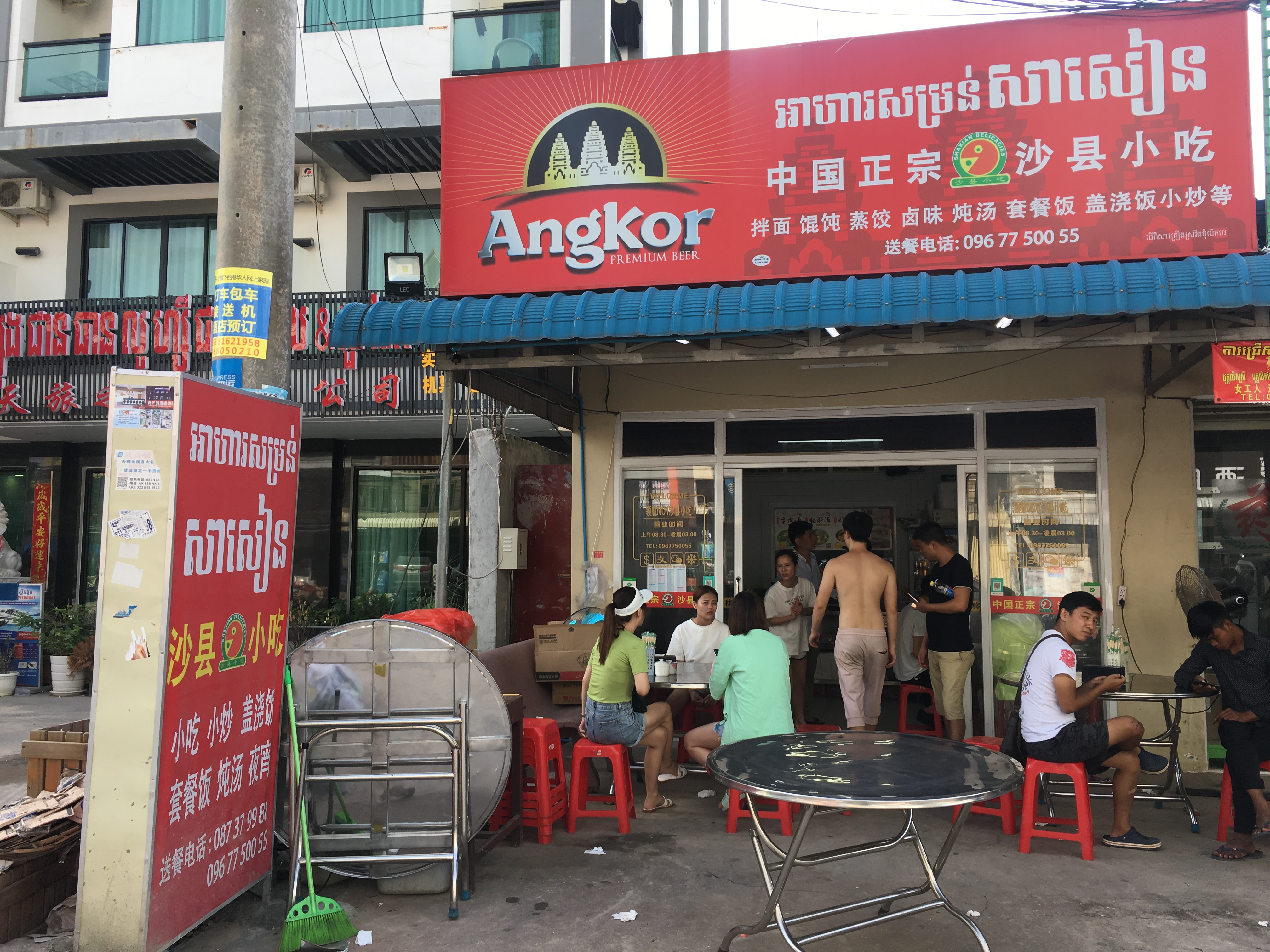 Throughout Sihanoukville, there are many Chinese convenient stores, restaurants, and businesses (such as KTVs or hair salons) serving Chinese tourists and expats. Interestingly, many of the low-wage staff at these places were Chinese, pointing to a new mode of low-wage migration from China.

Throughout Sihanoukville, many condominiums, hotels, and other projects are being built at a rapid rate, creating stress on the city’s infrastructure and waste management system. There is uncollected trash on the streets throughout the city, and officials admit that Sihanoukville’s waste management system is unable to keep up,  underscoring the importance of urban planning and management. In addition, the extensive construction in the city has resulted in loose soil and mud, making many roads un-walkable when it rains. 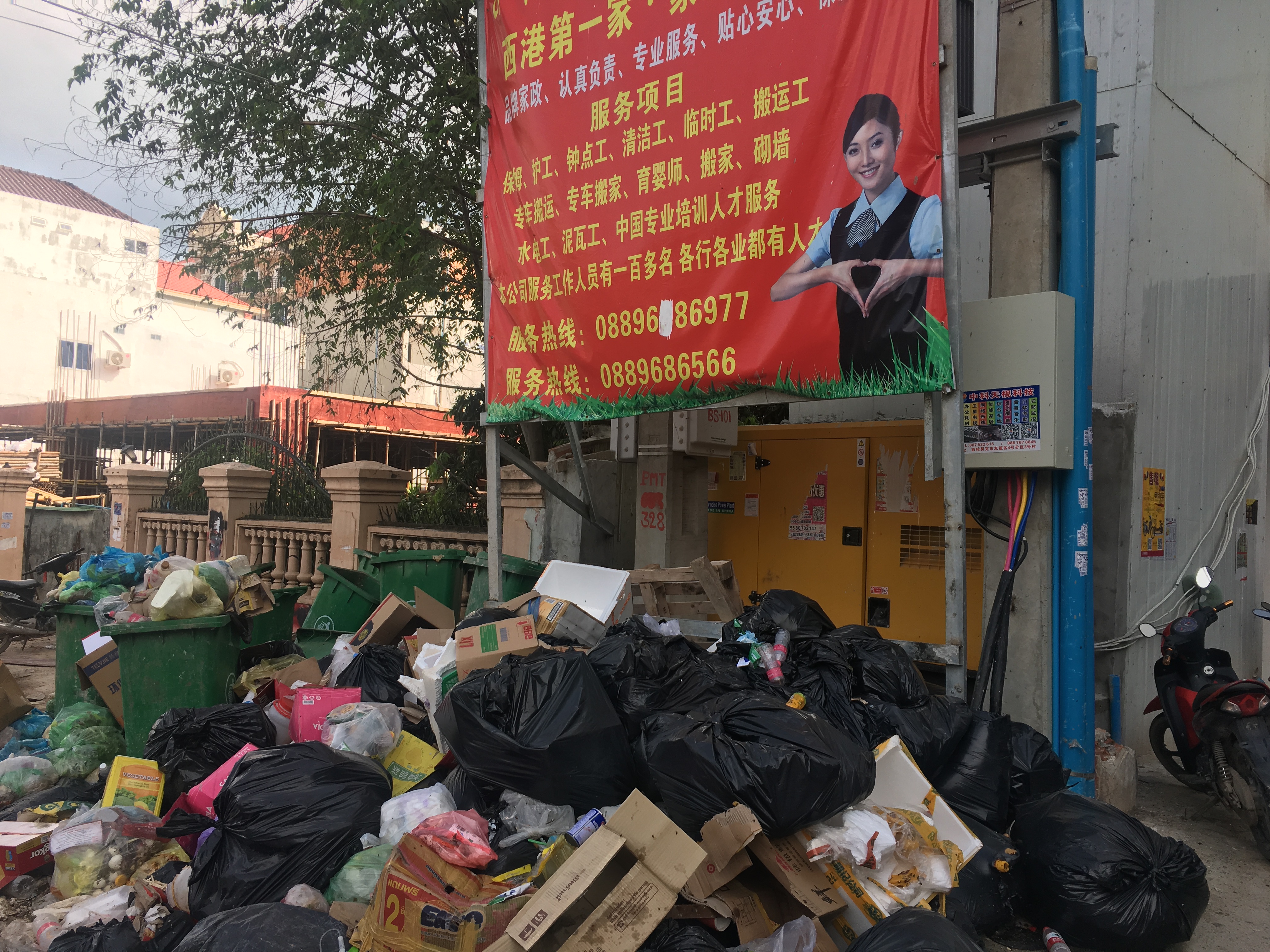 Trash outside a Chinese business. This is a common sight in Sihanoukville. Photo credit: Damon Lim. 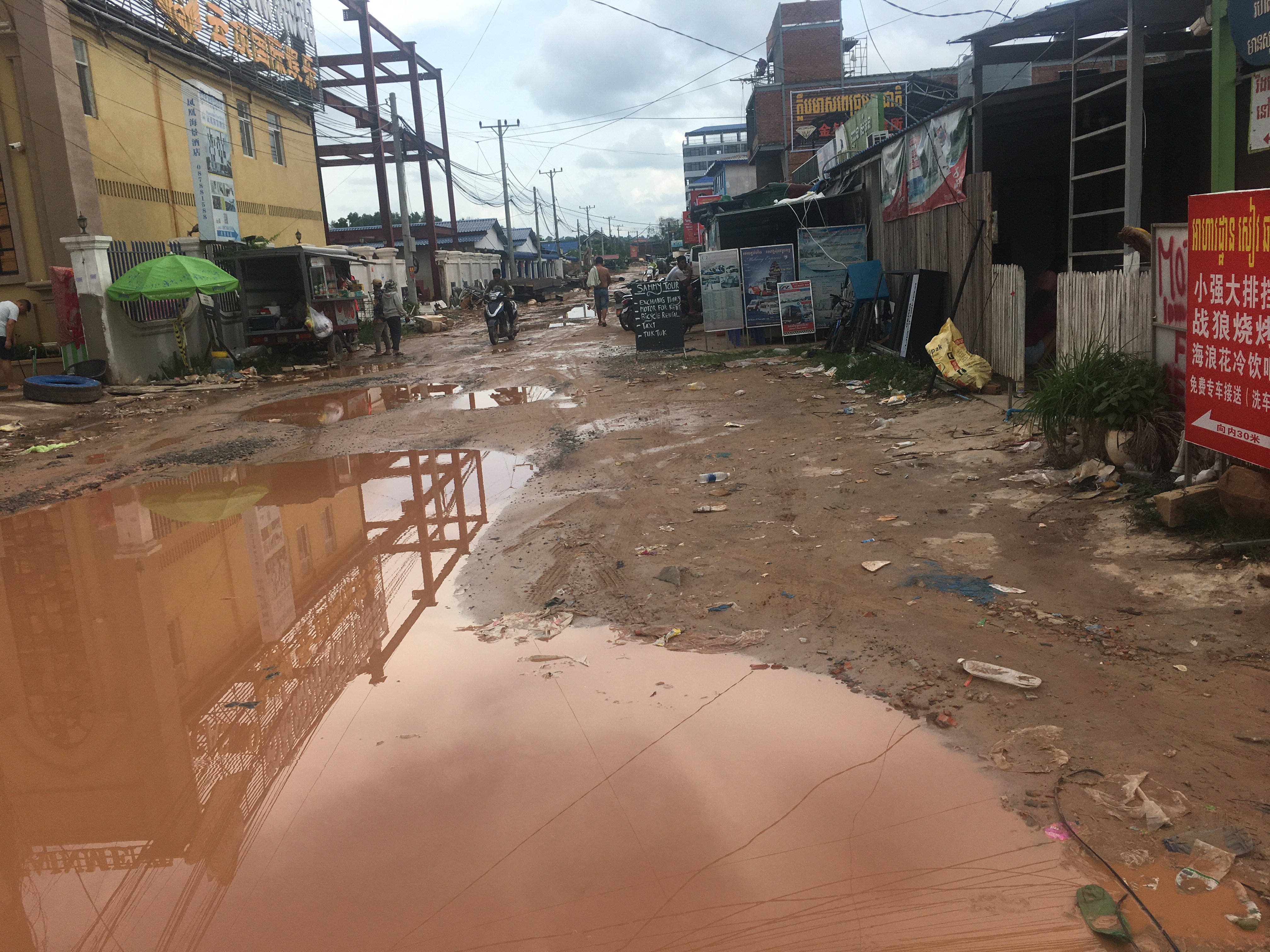 Rain and loose soil result in muddy pavements, which restricts walkability and access to the city. Photo credit: Damon Lim.

In June 2019, a Chinese-owned building under construction collapsed in Sihanoukville, leading to the deaths of 28 workers. Sub-standard safety regulations were listed as a reason for the tragedy, which led to the resignation of Sihanoukville’s governor and a backlash against Chinese investors, seen as contributing to environmental degradation and societal ills in Cambodia. While many of these casinos and investments are not technically infrastructure projects under the BRI, they can be considered part of China’s “Go Out policy” (走出去战略) which encourages citizens to invest overseas for China’s continued growth in the future.

While Chinese investments has great potential to improve the lives of people in Southeast Asia, it is imperative that China maintains oversight over the actions of its citizens and corporations abroad to safeguard the image of the BRI. Cities too must become more aware of the impacts of urbanization and formulate environmental policies to safeguard their livability.

More details about this research project can be found in this blog post, and more field notes — this time from Laos — are available here.