Sustainability at Davos 2020: All hype or not?

From 21-24 January, the planet’s most influential leaders and thinkers descended on the alpine town of Davos, Switzerland, for the World Economic Forum’s (WEF) 50th Annual Meeting. Featuring nearly 3,000 participants from 117 countries, including 53 heads of state, 119 billionaires, and Data-Driven Lab Director Angel Hsu, this year’s conference went beyond the usual themes of economics and geopolitics and focused instead on sustainability and stakeholder responsibility—a welcome shift, given the urgency of global climate change and increasing vulnerability of frontline populations. But how much of the talks had teeth, and how much was hot air? We take a look at some of the more meaningful climate-related highlights and announcements that emerged from the Forum:

A call for increased climate ambition

Ahead of Davos, Klaus Schwab, WEF’s founder, alongside the CEOs of Bank of America and Royal DSM, sent a letter to participants emphasizing “the opportunity and the need for companies and investors to show leadership on climate change.” The letter exhorted captains of industry to commit to a target of net zero greenhouse gas emissions by 2050 or earlier. Accompanying the letter were recommendations to help companies begin this journey of decarbonization, including publicly reporting climate-related data (e.g. financial risks and emissions) and establishing a 2030 milestone target. Such a call is likely to send a strong signal to business leaders and heads of states, setting a tone of climate urgency for future WEFs.

Business and financial institutions step up

The Net-Zero Asset Owner Alliance, a voluntary group of 18 institutional investors managing assets over US$4.3 trillion, has heeded the call for greater ambition and is committed to transitioning its entire investment portfolio to net zero emissions by 2050. Setting an example for the industry, the international group of finance giants has promised to provide regular progress reports as well as set intermediate targets every five years. It will also lobby policymakers to adopt similarly ambitious actions towards a net-zero economy. At Davos, it began closed-door talks with more than 50 C-level executives representing portfolio companies. The Alliance is supported by WWF and is part of the Mission 2020 initiative led by Christiana Figueres. Members include Allianz, Aviva, AXA, and most recently, the Church of England.

BlackRock is another behemoth that has made the news with its commitment to put environmental sustainability at the centre of its investment decisions. With more than USD$7 trillion in assets, the world’s largest fund manager will now move away from fossil fuel stocks and prioritize investments that reduce climate risks and contribute to a low-carbon economy. Such a decision could have ripple effects and engender a new norm of sustainable investing throughout the industry. At present, most financial institutions have only committed to greening their business operations and not their investments, which actually represent the bulk of their emissions. With major players like BlackRock and the Net-Zero Asset Owner Alliance stepping up, there could be a new impetus for others to reassess their policies and portfolios.

In collaboration with Deloitte, EY, KPMG, and PwC–the world’s four largest accounting firms—WEF has drafted a proposal identifying a core set of metrics and disclosures in line with Environmental, Social, and Governance (ESG) principles and the Sustainable Development Goals (SDGs). These metrics and disclosures, organized into four pillars of Governance, Planet, People, and Prosperity, could help pave the way for the establishment of an internationally accepted reporting standard across sectors and countries, allowing stakeholders and investors to better evaluate the sustainable performance of companies. The proposal was supported by CEOs representing 140 of the world’s largest companies. Transparency and accountability are critical issues within the climate sector that need to be immediately addressed if the pledges made in Davos and at other conferences are to hold any weight. Learn more about Data-Driven Lab’s complementary efforts to track non-state action here.

Other notable commitments from businesses include tech titan Microsoft’s pledge to become carbon negative by 2030, as well as “remove from the environment all the carbon the company has emitted either directly or by electrical consumption since it was founded in 1975.” The plan is accompanied by the setting up of a US$1 billion fund for carbon reduction technology.

While bold and laudable, it remains to be seen whether these plans by non-state entities will translate into action beyond the conference. Company representatives have not released further information or any sort of implementation roadmap delineating how they would achieve their commitments. We will be looking out for these details in the coming weeks and months following Davos.

WEF saw the launch of Frontier 2030, a new platform to help scale Fourth Industrial Revolution (4IR) technologies (e.g. AI, blockchain, IoT, big data, robotics, drones) to tackle global challenges like inequality and climate change. Climate change mitigation, in particular, is a global public good that suffers from market failure, and 4IR technologies provide possible options for fostering collective and concerted actions, e.g. decentralized decision-making, more effective data sharing and analysis. The platform will bring together stakeholders from government, business, academia, and civil society to accelerate the rapid and responsible deployment of these new technologies. As Chair of the WEF’s Global Future Council for 4IR and Global Public Goods, Dr Angel Hsu has been tasked with convening a global group of experts and key actors such as Microsoft, Google, and the UN Development Program to develop 4IR applications and shape the direction of Frontier 2030. 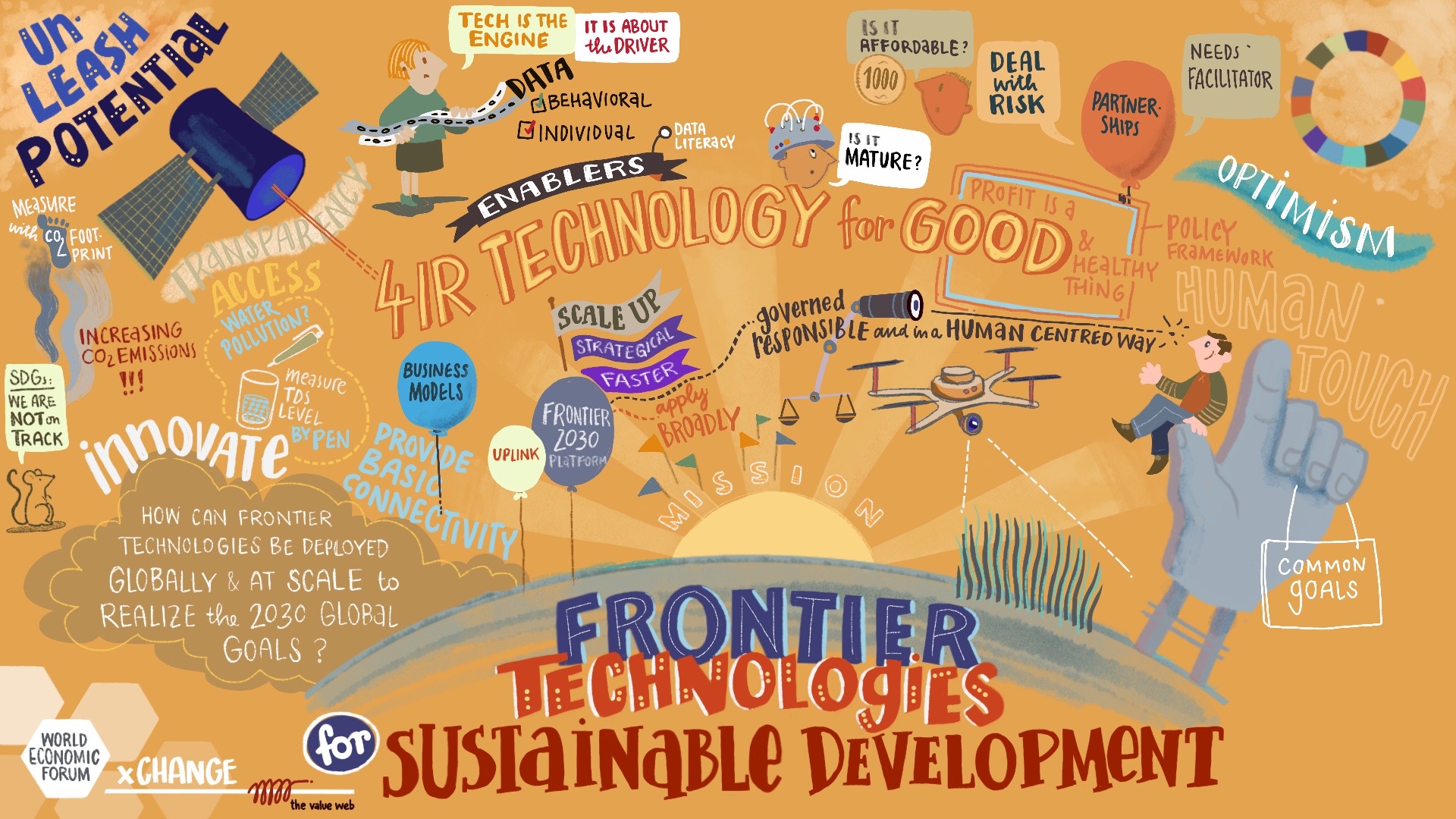 An art map of 4IR and sustainable development themes. Image by WEF.

“Nobody’s against trees,” said Salesforce CEO Marc Benioff on the WEF launch of his new reforestation initiative, 1t.org. The platform, which has even received endorsement from US President and long-time climate change skeptic Donald Trump, will mobilize funds, technological tools, and political will to support existing forest conservation and restoration projects around the world, such as the Bonn Challenge, the Global Partnership for Forest Landscape Restoration, and WWF’s Trillion Trees Initiative. Additionally, Salesforce has committed to conserving and growing 100 million trees over the next decade. A trillion new trees could potentially remove 830 billion tons of carbon from the atmosphere.

Time’s 2019 Person of the Year was back at WEF doing what she does best: speaking truth to power. Addressing a hall full of national leaders and business magnates, she sternly asserted that “our house is still on fire, and you’re fuelling the flames.” The young activist and arguably the most popular person at the Forum stressed the need for the world to get to “real zero” emissions and not just net zero. Most importantly, she called for an immediate end to fossil fuel extraction, subsidies, and investments, citing the irrefutable science and the urgency of action it demands. It is likely that 2020 will see the continued rise of youth activism all around the world, providing much-needed momentum for efforts to hold actors accountable not just to their pledges but to future generations. 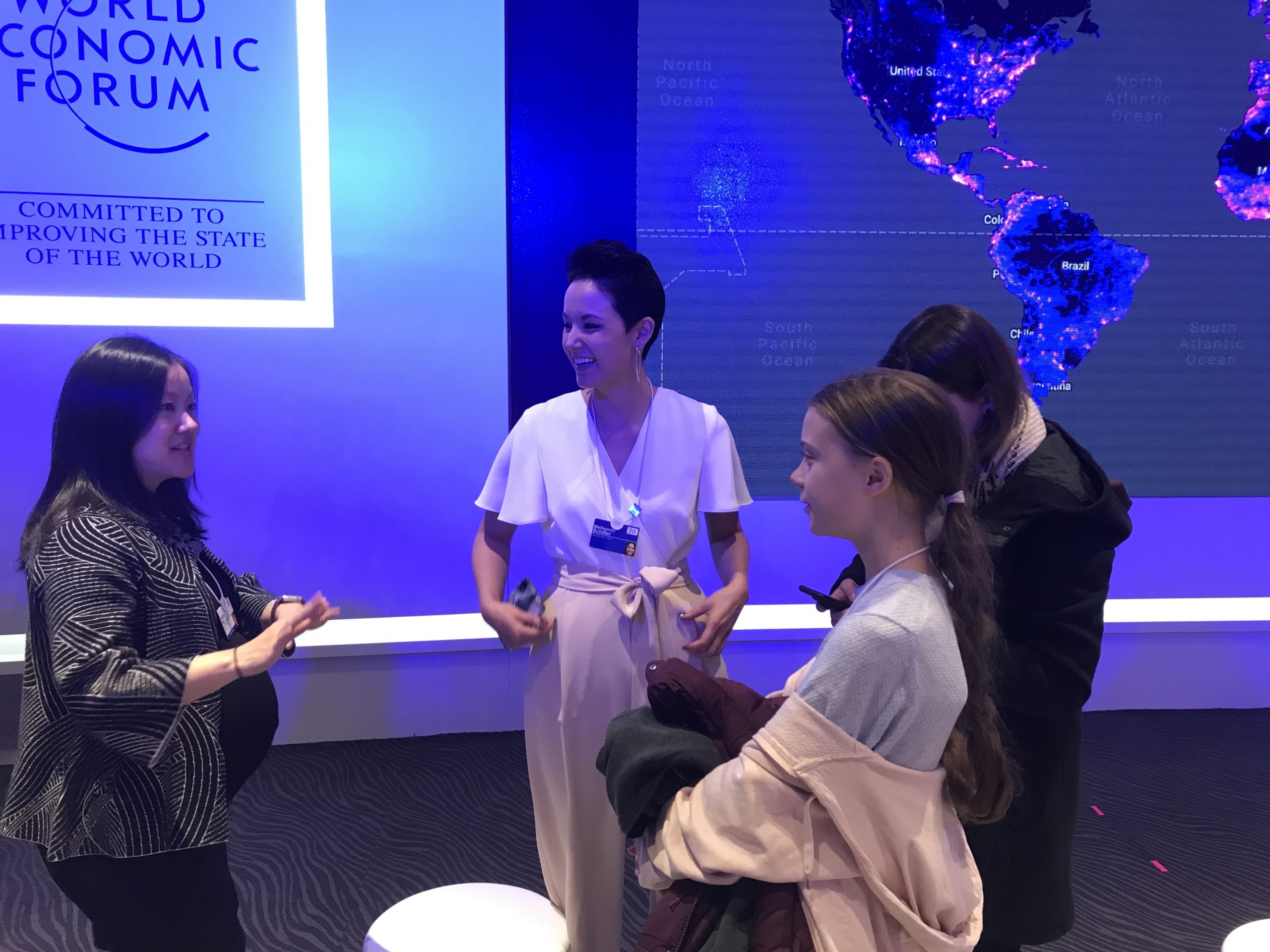