After Paris: The Next Steps for City, State, Regional, and Business Climate Action 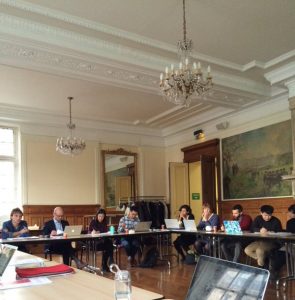 Participants during the workshop on Mapping the State of Play: Analyzing Non-state and Sub-national Climate Actions. Photo courtesy of Thomas Hale.

This December’s Paris Climate Conference marked a turning point not just for international climate negotiations, but also for the growing leadership of cities, states, regions, businesses, investors, and civil society organizations. On December 4, 2015, over 400 mayors, representing over 650 million people, gathered to demand climate action at the Summit for Local Leaders. Nearly 5,000 companies, hailing from more than 88 countries, and representing over $38 trillion USD in revenue, have pledged to mitigate their emissions, support adaptation efforts, or finance climate action. As these efforts continue to grow, efforts to understand and quantify their contributions to national and global goals are increasingly vital.

A flood of recent research, much of which was published during the 21st Conference of the Parties (COP-21), has already begun to assess the scope and impact of this activity. On Saturday, December 5, 2015, Yale University, in partnership with the Yale Data-Driven Environmental Solutions Group and NewClimate Institute, held a workshop dedicated to mapping the state of analysis around climate action from cities, regions, businesses, and investors (also deemed “sub-national” and “non-state” climate action). Researchers compared notes on the challenges and data gaps they encountered in their recent research, and discussed future trajectories in sub-national and non-state climate research.

Managing a mountain of data

Harmonizing information across different climate action networks will be crucial to achieving a clearer picture of who is taking action, and how ambitious their pledges are. In the meantime, researchers can help point out gaps, suggest alignment strategies, and contextualize existing information.

Existing data collection efforts can also fail to capture the full extent of climate action from developing countries. Local governments may lack the time and resources to report to existing data collection platforms, while data platforms may overlook emission-cutting strategies that may not explicitly classified as mitigation efforts within these countries. For instance, the growing roll-out of Bus Rapid Transit systems often appeal to cities based on their ability to reduce travel time and ease traffic, rather than on their ability to lower emissions. Any research that builds on this existing databases of climate change needs to acknowledge and wrestle with these platforms’ blind spots and incongruencies.

Researchers can also benefit from clarifying and harmonizing their own approaches to measuring and making sense of climate action data. Many recent analyses have focused on understanding how sub-national and non-state climate action alter the greenhouse gas emissions that would occur under a “business-as-usual” (BAU) scenario, but the assumptions that go into creating a BAU scenario often vary. Data gaps also make it difficult to trace the overlaps between national and sub-national and non-state commitments, and the assumptions used to pinpoint the degree of overlap vary from study to study.

Sharpening the understanding of these overlaps is crucial to determining if sub-national and non-state initiatives are helping countries to achieve or overshoot their mitigation targets. The Paris Agreement, which asks countries to “ratchet up” the ambition of their climate action plans every five years, makes the stakes of this knowledge even more crucial. Questions of scale also dog efforts to understand climate action in the private sector: researchers noted that the process and assumptions made to scale international companies’ commitments up or down to the country unit could also benefit from more attention and specificity.

While quantifying emissions reductions is a key area of research, it is also important not to overlook smaller initiatives, that may have a smaller impact on emissions, but represent innovative approaches to mitigation, adaptation or climate funding. In addition to synthesizing the emissions impacts from existing pledges, contextualizing these commitments and mapping gaps in climate action should also remain a research priority. For instance, while the NAZCA platform includes 15 of the world’s 20 largest banks, most of these banks pledge to shrink the emissions footprints of their buildings, rather than tackling the more significant emissions embedded in their investment decisions.

Visions of what marks an effective climate initiative vary. Clarifying the criteria for defining a successful initiative could help cities, companies, businesses, and investors design their climate actions. Making these definitions more explicit could also help shed light on existing trends and blind spots within the existing research.

For instance, current research has focused on initiatives that can drive significant cuts in greenhouse gas emissions, a priority for developed countries looking to shrink their large carbon footprints. While this remains important, global research should also include initiatives focused on adaptation, and actors and businesses working at smaller, more local, scales – a style that often characterizes climate action in the Global South. Broadening researchers’ focus will ensure that crucial feedback, insights, and best practices inform climate action in both developed and developing countries. As the world confronts the increasingly urgent need for action to cap and adapt to global warming, delivering accurate and comprehensive feedback can be a powerful tool for supporting and accelerating new kinds of solutions.

For workshop participants, presentations and a full workshop synopsis are available at the link below. E-mail datadriven@yale.edu to request access.