Four Charts that Explain Climate Actions from Cities and Companies 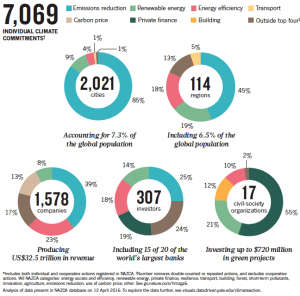 As more than 160 leaders gather in New York City for Earth Day’s largely symbolic Paris Climate Agreement signing, critical support from companies, investors, civil society and sub-national governments, including cities and regions, should not be forgotten. In Paris last December, more than 400 city mayors and governors pledged climate actions ranging from reducing carbon emissions to investing in sustainable transport systems and other infrastructure. Institutional investors committed to invest up to $720 million in green projects and technologies, while companies representing over one-third of the global economy have pledged various kinds of climate action.

My research team, the Yale Data-Driven Environmental Solutions Group, has analyzed the more than 11,000 climate actions recorded in the United Nations’ Non-State Actor Zone for Climate Action (NAZCA) – the most comprehensive platform for city, region, company, investor and civil society climate action. NAZCA is a first step to understand how these actors are tackling climate change, but there are many gaps in its database, shortcomings which we address in a recent Nature article.

Here’s an overview of what we do and do not yet know about NAZCA’s myriad climate actions in 4 charts:

2. Most pledged climate action is disproportionately occurring in developed countries. The majority of climate action recorded in NAZCA is taking place in Europe and North America, with 74 percent of reporting cities located in Europe. These figures do not mean that cities and regions in developing countries are not acting, they’re only not being recorded and channeled through international networks and fora, like North America’s The Climate Registry or C-40 Cities for Climate Leadership.

3. Some high-emitting sectors are lagging on climate action. The industrials sector, which includes trucking, railroads, airlines, and construction companies, only has 40 percent of its Forbes 2000 members (a list of the world’s largest public companies) pledging climate actions on NAZCA. Financial companies, like real estate and insurance companies, are also falling behind, with only 42 percent of their Forbes 2000 members on NAZCA.

4. Very few of the fossil fuel and cement companies responsible for the majority of historic carbon emissions are taking climate actions. Only 17 out of 90 companies that have produced 63 percent of global historic carbon emissions from 1751 through 2010 have climate actions recorded in NAZCA. Some of the companies that are not acting (in pink below) include oil companies in OPEC countries (Qatar Petroleum, Abu Dhabi National Oil Company, Petroleos de Venezuela) and in developing countries (Pertamina, Indonesia and Petronas, Malaysia). But the missing firms also include U.S.-based Peabody Energy, which just announced bankruptcy, Arch Coal, and Marathon.

Companies shaded green are on NAZCA; companies shaded in gray are no longer extant; Pink are companies that are not on NAZCA. For more, see visuals.datadrivenlab.org/climateaction. This research was supported by the French Environment and Energy Agency.