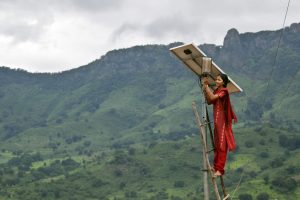 At the UN this week envoys from more than 130 nations, including 60 world leaders, will convene to sign the Paris Climate Change Agreement. This historic deal, achieved during global climate talks last December, was bolstered by contributions from hundreds of city mayors and corporate CEOs who made their own climate pledges during the negotiations.

Now robust implementation of these pledges from cities, states, companies, and investors worldwide will be crucial to delivering on the agreement’s promise. But what do these commitments add to national plans? And how do they factor into the global climate agenda?

According to new Yale research, the potential impact of these commitments is crucial. In a new analysis published in Nature, the research team highlights the need to move from a discordant system of climate commitments to a more transparent, coordinated, and comprehensive framework.

Using data from a UN registry known as NAZCA (Non-State Actor Zone for Climate Action), the Yale team analyzed more than 11,300 climate commitments from cities, regions, private companies, and financial institutions throughout the world. Launched in 2014 by the UN Framework Convention on Climate Change, NAZCA is the world’s most comprehensive climate action registry.

The new analysis, led by Angel Hsu, an Assistant Professor at Yale-NUS College and the Yale School of Forestry & Environmental Studies (F&ES), provides a detailed picture of this sub-national and non-state climate action landscape.

“Climate actions pledged by city mayors and corporate CEOs played a crucial role in building momentum for national government leaders to deliver the Paris Agreement,” said Hsu, who is also director of the Yale Data-Driven Environmental Solutions Group. “Now it is critical to track these commitments to ensure they are implemented and to understand how they add to the goals countries pledged in Paris.”

In their analysis, the Yale team synthesizes central themes reflected in NAZCA’s data, describes the platform’s main challenges, and offers critical feedback for improvement. Though larger than any other reporting site, NAZCA still has sizable data gaps, especially in the developing world. Many major historical polluters and financial institutions are missing from its rolls. Engaging with companies, banks, and sub-national governments in the Global South is a needed next step for NAZCA, and for the data providers in its network, to fill these gaps, according to the analysis.

Hsu and her fellow researchers make the case that a reporting hub like NAZCA could play a central role in promoting climate action within and amongst nations. Offering a principal, publicly available registry — one that governments and individuals look to for details and data on climate initiatives — could act as a “climate club,” they say. Such a resource, they suggest, could help coordinate standards and benchmarks for climate actions, build a framework for implementation tracking, foster ambition and collaboration among actors across sectors, and promote vertical alignment throughout all levels of governance.

The Yale team makes several core recommendations for NAZCA to grow itself into this sort of next-generation platform, laying out actionable measures for the registry to undertake, such as strengthening reporting criteria and tracking its members’ follow-through on their commitments.

“It’s exciting to see that climate actions recorded on NAZCA grew almost three-fold, from 3,000 to 11,300, in less than 12 months,” said Yaping Cheng, a researcher on the Data-Driven Yale team. “NAZCA has the potential to develop into the go-to place for gauging the momentum of global climate actions.”

Created in 2015, Data-Driven Yale is an interdisciplinary research group that uses data analytics to create solutions to the world’s environmental challenges. The group includes policy experts, data scientists, visual designers, and interactive programmers from F&ES and Yale-NUS College in Singapore.

Coinciding with the release, Data-Driven Yale has also launched an online tool (visuals.datadrivenlab.org/climateaction) that illustrates climate actions and commitments from the tens of thousands of cities, regions, and companies that report on NAZCA. The dashboard’s interactive and searchable features visualize NAZCA data, combining geographic, economic, and census information with climate pledges. It also provides context for the platform’s climate commitments, adding layers of transparency and allowing users to see which cities, regions, and companies are acting and where. Yale’s online tool, for instance, overlays NAZCA commitments with a map of the world’s nations allowing users to dig down into every country’s non-state and sub-national commitments and determine the sector and categorical breakdown for these initiatives.