China in Copenhagen, Day 9: The Big Elephant in the Room – MRV

Both Team China and Copenhagen are under the weather as a wet snowfall hit in the early afternoon. We are starting to feel the palpable stress of country delegations to remove brackets and whittle down the negotiating text in preparation for the high-level ministerial meetings on Dec. 17-18, when 110 heads of states will participate. Additionally, the Bella Center is becoming celebrity central: today a member of Team China spotted Jet Li, who filled in for Climate Change Minister Xie Zhenhua at a side event off-site called ‘China’s pathway to a low carbon economy and society’ (Minister Xie and Jet Li = perfect substitutes?). Li charged the audience to think globally, emphasizing that he is “100 percent made in China but a citizen of the world.”

Li’s words could not have come sooner, as we’re starting to wonder if the impasse between developed and developing countries we noted from Day 2 will be resolved before the heads of states sit down to dot the i’s and cross the t’s on a agreement that hopefully all Parties will agree to. We’ll explore why this schism between developed and developing countries does not seem to be healing.

1. MRV – Three Little Letters with Big Implications
We noted from the get-go that whether mitigation actions from developing countries would be subject to international verification (e.g. “measurable, reportable, and verifiable”), would be a critical issue for the Copenhagen talks, particularly in light of demands from Capitol Hill that China must allow for international verification in order for the United States to sign on. China argues, on the other hand, that it has no obligation under the UNFCCC and Bali Action Plan to do so. One of the top headlines on the NY Times today “China and U.S. Hit Strident Impasse at Climate Talks” spoke about the U.S.-China disagreement with regards to the MRV question. This is an issue we’ve heard both the U.S. and China butt heads about this past week.

To set the record straight, we’ve heard various Chinese leaders say that they are not opposed to MRV for mitigation actions that receive international financing, technology, or capacity building support. This includes Vice Minister of Foreign Affairs He Yafei who stressed that China has its own internal systems for MRV comparable to those of “developed countries” and will make reports coming out of China “transparent” and “publicly available” (see our post “No Country is an Island” for more details on what Vice Minister He said). For actions that receive international support, technology, or capacity building, China says those actions can be subject to international MRV. During a press briefing today, Ambassador Yu Qingtai, China’s Special Representative on Climate Change Negotiations from the Ministry of Foreign Affairs, reiterated China’s stance on the MRV issue, pointing back to the Bali Action Plan and stressing that China will not agree to anything beyond the Bali Action Plan.

“If we are in last stage of negotiations, and there are requirements that go beyond UNFCCC and go beyond BAP, China will not agree,” Yu stated emphatically.

The U.S.’s disagreement with China’s view of MRV probably rests largely on the fact that this language and the most recent revised text for the Long-term Cooperative Agreement (AWG-LCA) provide a loophole of uncertainty for China. The new AWG-LCA 8, item 3 on nationally-appropriate mitigation actions (NAMAs) by developing country parties released this morning creates either a registry as part of the financial mechanism or some other mechanism to record NAMAs from developing countries, specifying only NAMAs seeking or receiving support would be required for verification through an international mechanism or registry. Here’s where this “loophole of uncertainty” comes into play-because China has implemented actions that address climate change through its Eleventh Five-Year Plan since 2005 and has internally funding all of its energy efficiency measures and mitigation actions (and furthermore hasn’t asked for any funding with regards to their 40-45% reduction in carbon intensity by 2020 from 2005 levels), China would therefore be exempt from international MRV if this text is eventually agreed upon.

We can imagine that this makes U.S. politicians uneasy, as Massachusetts Representative Edward Markey, who co-sponsored the climate and energy bill that passed in June, told the NY Times:

If China or any other country wants to be a full partner in global climate efforts, that country must commit to transparency and review of their emissions-cutting regime. […] Without that commitment, other governments and industries, including those in America, will be hesitant to engage with those countries when they try to partner on global warming.

As this is the current sticking point in the U.S.-China impasse (reporters asked about verification during every press event we attended today), we would like to pose the question – what options does the United States have if China doesn’t agree to international MRV? As China has said they won’t budge, will the United States? Deputy climate change envoy for the U.S., Jonathan Pershing said during an NGO briefing this afternoon that the U.S. will stand by the request for all parties to MRV, despite China’s concerns of “intrusiveness.” There has been talk of trade sanctions, but Ambassador Yu said today that China will be opposed to any actions by countries to set up new trade barriers under “an excuse of protection the climate.”

2) Message from developing countries: We mitigate, and so can U(SA)! 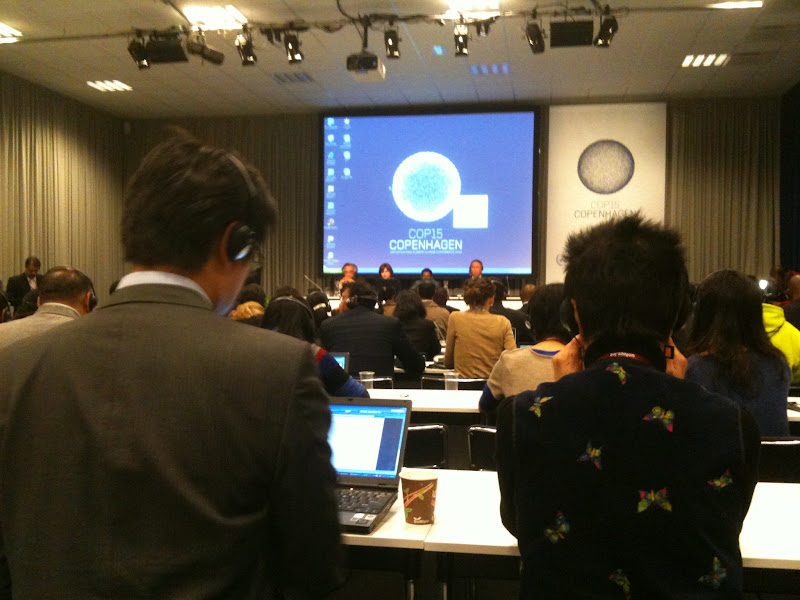 In a press conference this afternoon ministers from the BASIC group (Brazil, South Africa, India, China) demanded developed countries to match their efforts to mitigate greenhouse gas emissions [pictured right; Vice Minsiter Xie Zhenhua is the right most of the panel up front]. Describing their collective actions–a buffet of technologies, land use policy reforms, and deforestation regulations, the ministers positioned their countries as leaders among both developed and developing nations. The Brazilian minister mentioned that World Wildlife Fund has done the math on the emissions reductions and shown that the policies of the BASIC group achieve significant reductions compared with the developed world. Reflecting on their countries’ reduction plans, the ministers assembled not only saw themselves as good actors in the climate negotiations but also as representatives of all developing countries which have chosen to take deep cuts in the face of projected climate impacts and the high costs of implementing new technologies and policies.

Referring to the current proposals as a “derailment” from the Bali Action Plan, the South African minister noted the absence of deep emissions cuts or significant technology transfer from the developed world. The Indian minister forcefully (and punnily) stated that “the BASIC group is a basic reality” and went on to describe their united front against any manipulation of the process or weakening of the UNFCCC, Kyoto Protocol, or Bali Action Plan.

Between the strong words of these ministers, one can see issues worth investigating, especially in light of the MRV debate discussed above. Although focusing his remarks primarily on the two-track approach, the Indian minister also addressed the MRV elephant in the room, saying that the Indian Parliament itself is a “ruthless” method of ensuring appropriate MRV standards and follow-through in their country. That may suffice in India, but the question holds for China, the other BASIC members, and truly every country.

In the halls, Luke ran into Hans Joachim Schellnhuber, Director of the Potsdam Institute for Climate Impact Research and Chair of the WBGU, and asked him his thoughts on the Chinese position and the negotiations in general. Professor Schellnhuber replied that we could expect China’s actions to be measured and rational while India presented more uncertainty. In his words, “India is the black horse.” His striking response offered even more insight into the BASIC posture: if the MRV position has created an impasse, what more can we expect given the negotiating timeline and the gaps between various positions.

It is clear that developing countries are asking for developed countries to deliver. To make his disappointment clear, Ambassador Yu said in English to the press, “It’s almost word for word, [developed countries are saying] we didn’t meet our targets, but you better accept that as a fact of life. There are no regrets, they didn’t even come up with something like, ‘Sorry, we failed.'”