Cities strive to improve environmental performance, but most of them fail to provide benefits equally

The Urban Environment and Social Inclusion Index, first launched in 2018, is the only spatially-explicit index that shows on a neighborhood-by-neighborhood basis how cities perform on Sustainable Development Goal 11’s charge for inclusive urban development.

The latest results find that over half of the cities fail to provide environmental benefits equally among citizens, even among cities performing above average on environmental indicators like air quality, tree cover, sustainable transport access, and urban heat.

While cities around the world are taking action to combat climate change, a recent analysis of the Urban Environment and Social Inclusion (UESI) Index finds equity to be the next global challenge.

First launched by the Data-Driven EnviroLab in 2018, the UESI is a first-of-its-kind tool that leverages high-resolution, large-scale data to reveal how cities perform at the intersection of environment and social equity. As the only spatially-explicit urban index that provides comparable data and metrics on a neighborhood by neighborhood scale,  the UESI allows cities to understand how residents experience urban environments in vastly different ways and to benchmark their performance with other cities around the world. 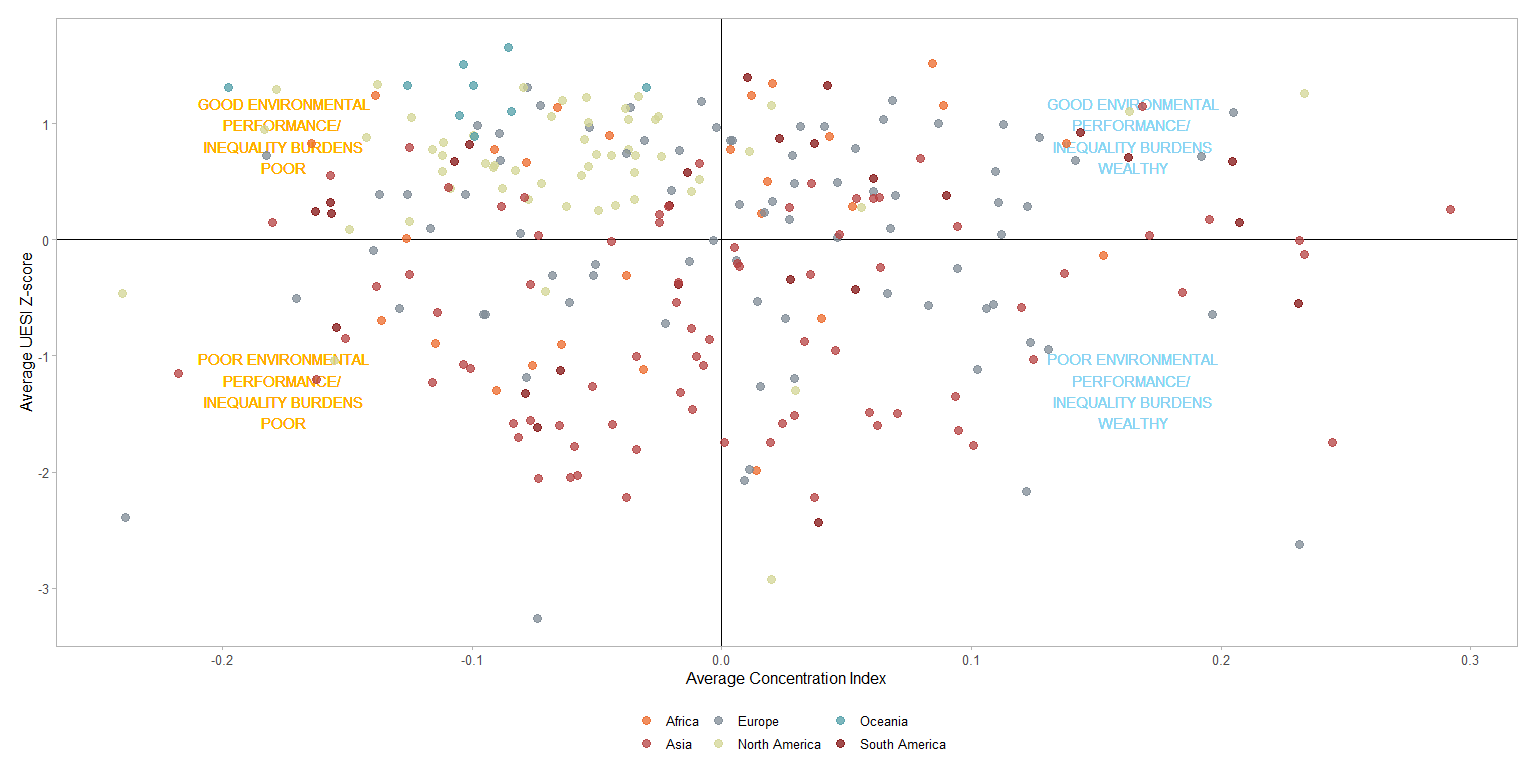 Despite the overall above-average performance of most cities, the UESI has also found imbalances in the distribution of cities’ environmental benefits and harms. 56% (161 out of 285) of cities are burdening less wealthy neighborhoods with poorer air quality, more exposure to urban heat, and a general lack of access to tree cover and public transport.

“The latest UESI results show promise but also worry. Although the majority of cities have lowered air pollution and provided sustainable transport and tree cover, they’re not providing these benefits equally to all. Even cities like Copenhagen, which have been called the ‘bicycle kingdom’ and are viewed as an urban sustainability leader, have room to improve in ensuring that all of its residents, regardless of income, have the same access,” said Professor Angel Hsu, director of the Data-Driven EnviroLab and the UESI’s Principal Investigator. 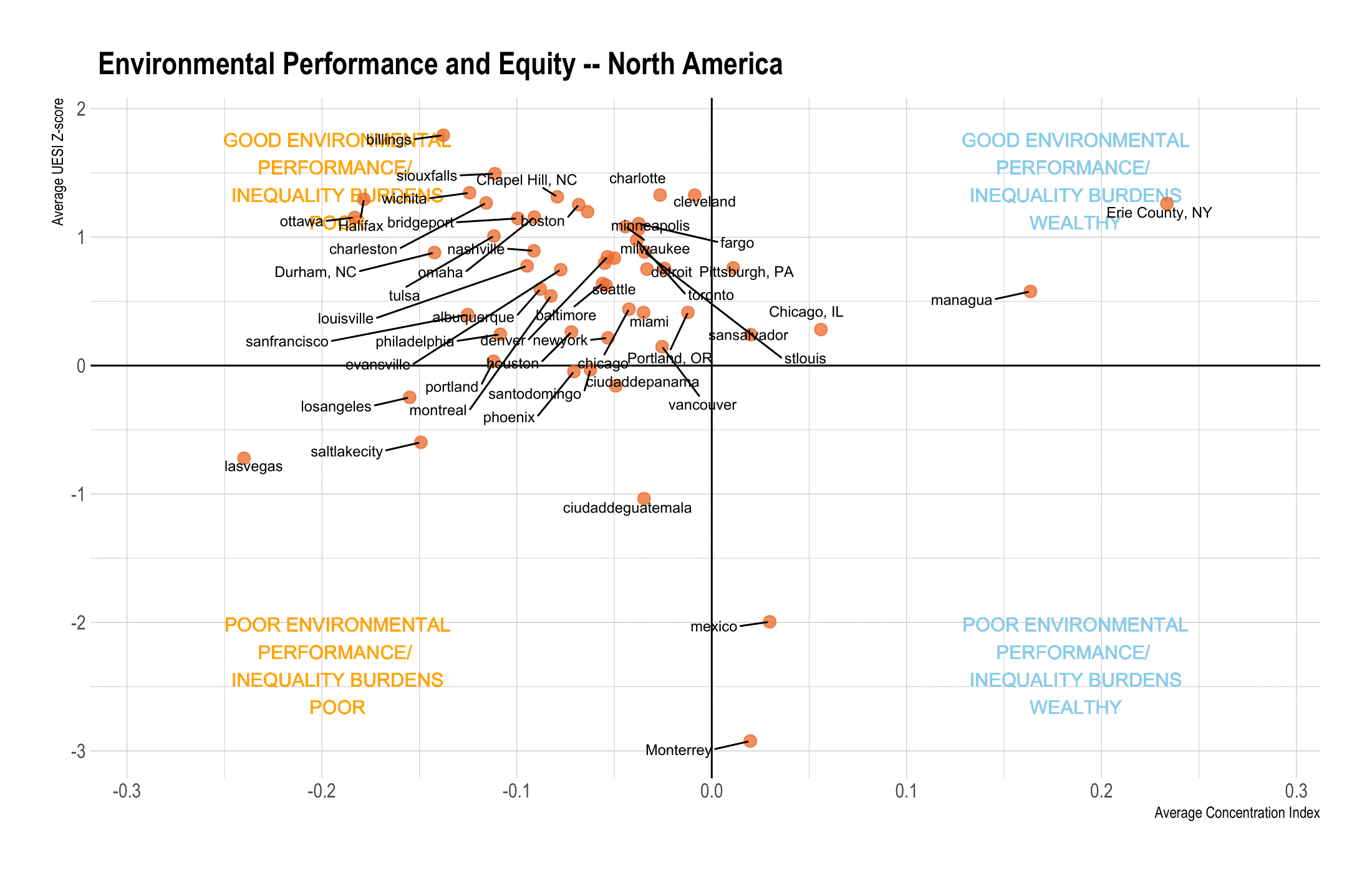 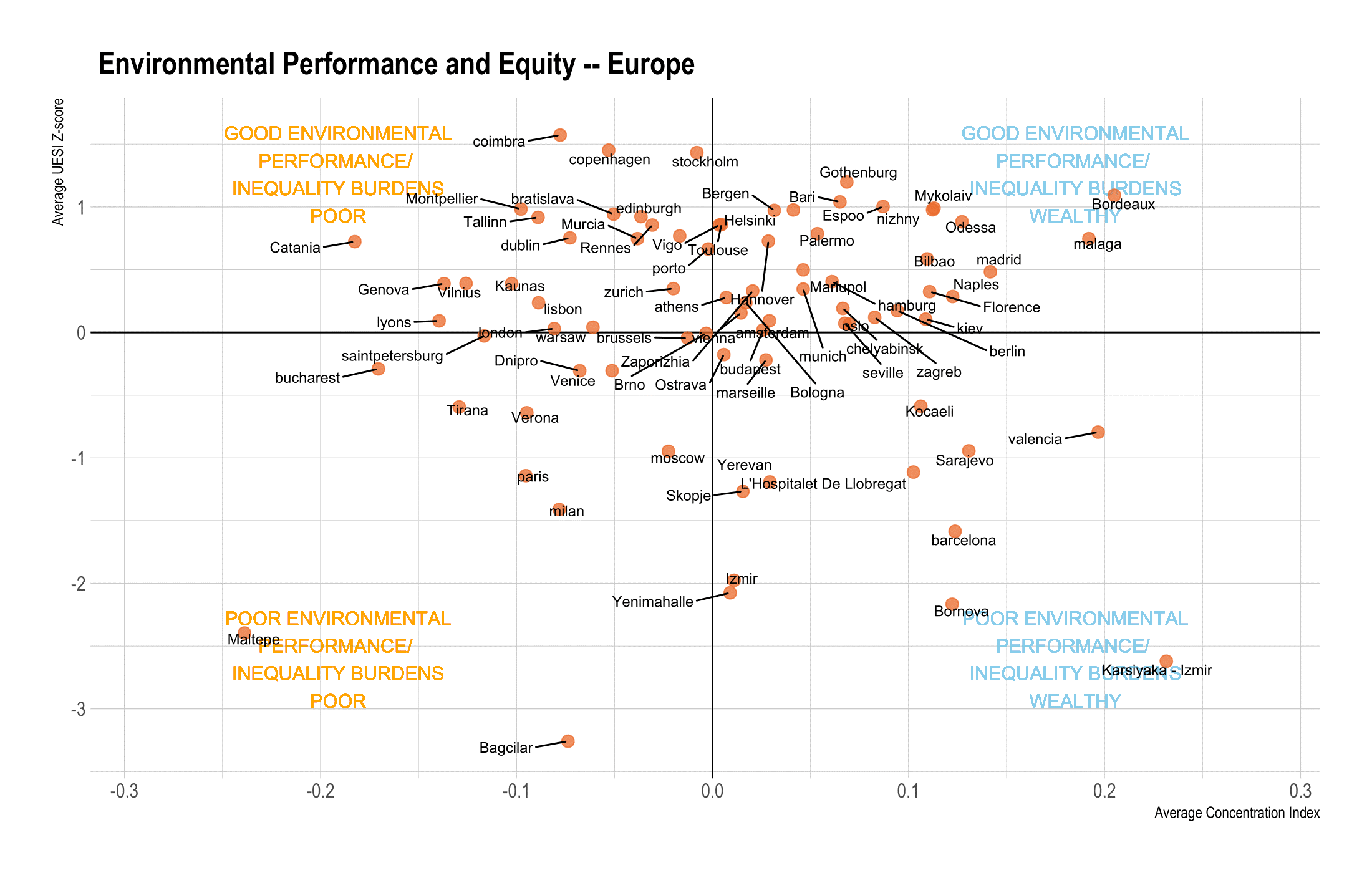 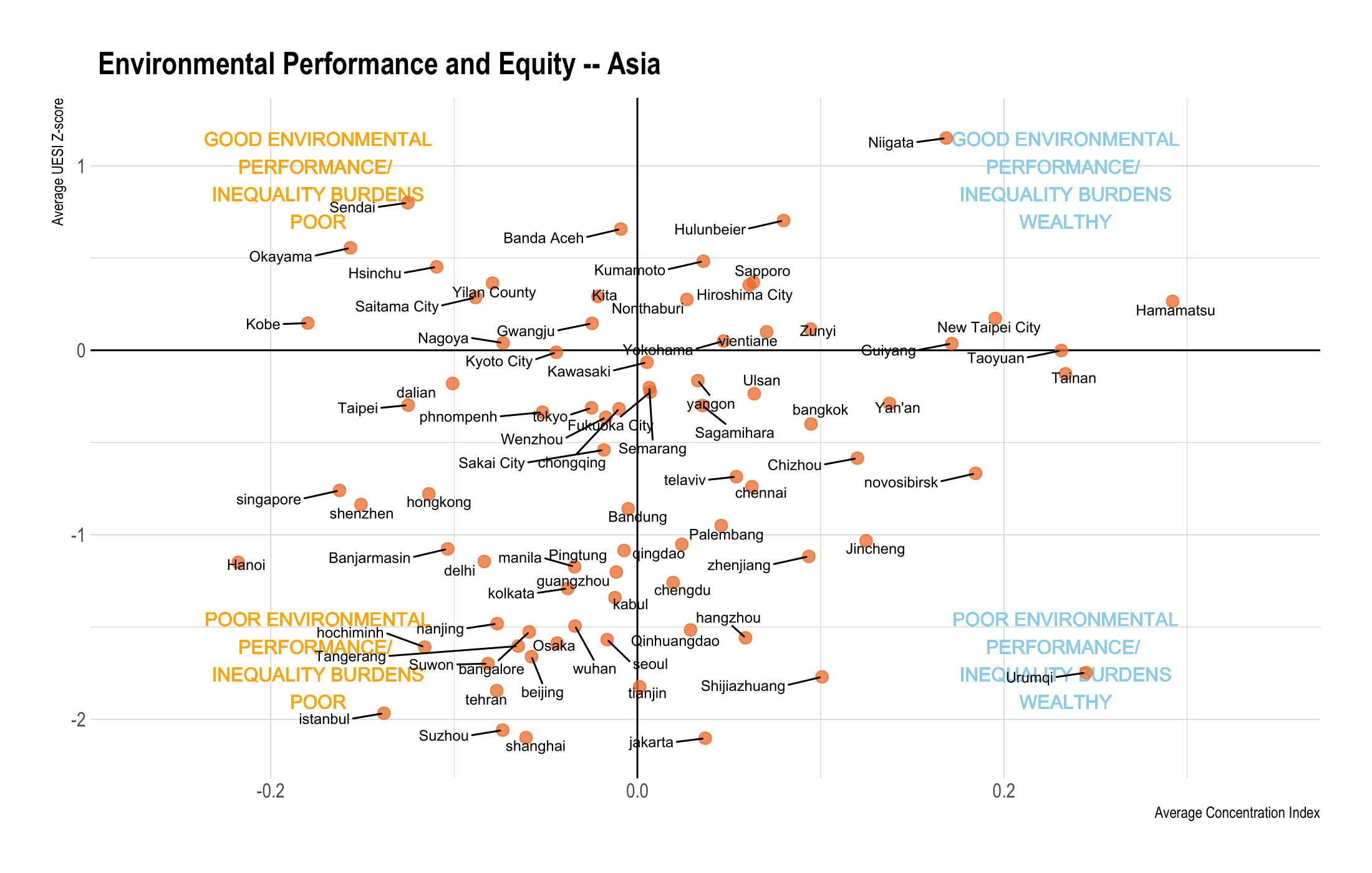 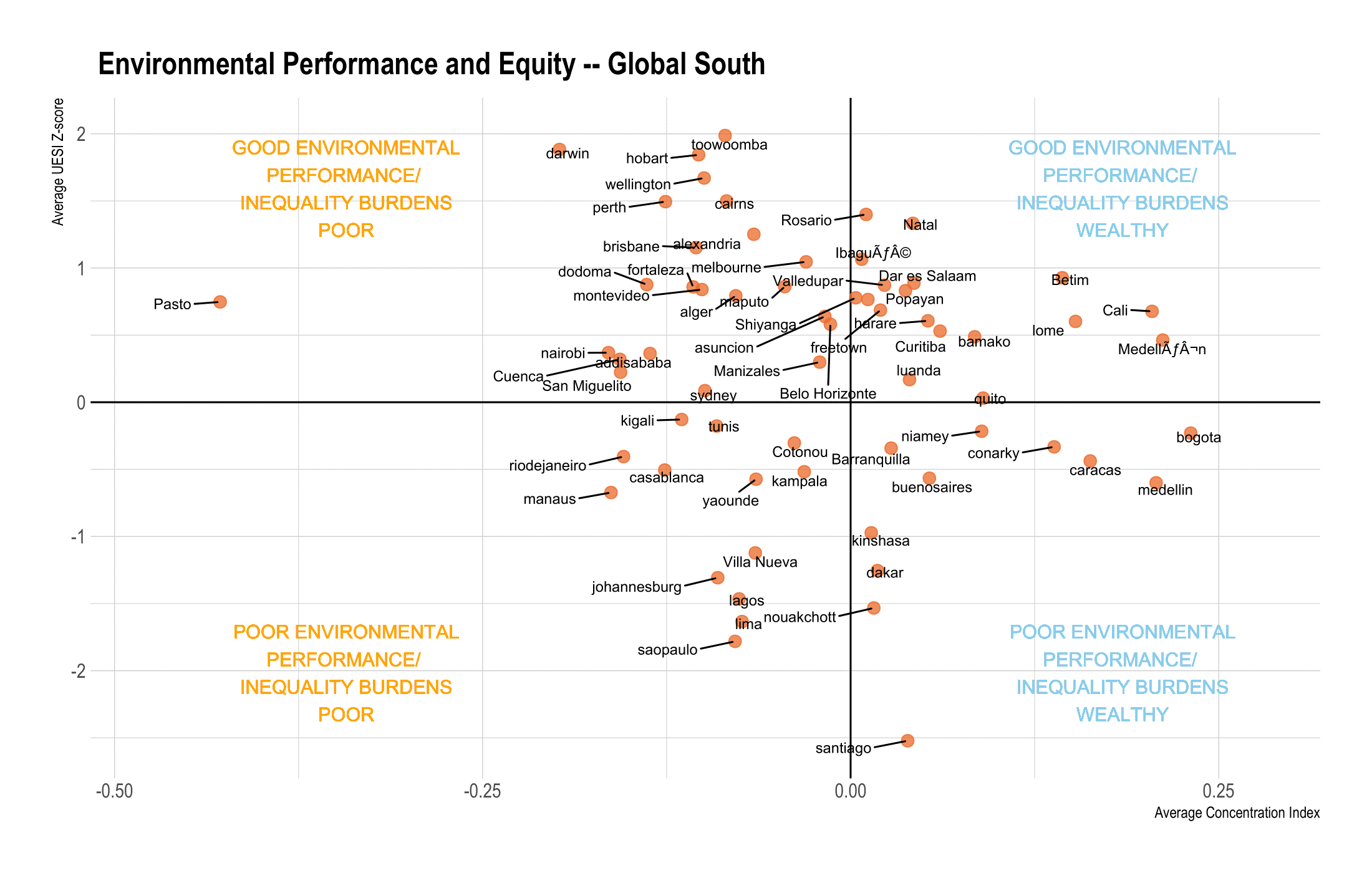 For the first time, this year’s index provides trend indicators for the UESI’s previous 165 cities. Some cities have shown significant progress in improving urban sustainable equity For example, Stockholm, Tianjin, and Johannesburg have improved in our equity indicators, providing for more equitable environmental benefits and protection from environmental harms. Some cities like Barcelona and Berlin, however, have worsened in environmental equity.

“The fact that some cities are improving in environmental equity and others seem to be sliding indicates that no city can rest on its laurels. Even European cities like Berlin and Barcelona, which have historically performed well on our environmental indicators, must stay vigilant in ensuring they are working to provide equitable and inclusive urban sustainability.  Through the UESI and our website, which provide detailed maps and dashboards for every city, we hope to provide researchers, government officials, and policy-makers with a user-friendly tool and informative visualizations of cities to guide decisions,” said Xuewei Wang, research data scientist of the Data-Driven EnviroLab and one of the lead researchers of the UESI Index.

The UESI is a partnership of the Data-Driven EnviroLab based at the University of North Carolina at Chapel Hill and the Samuel Centre for Social Connectedness based in Toronto, Canada. The latest findings will be available on the UESI’s website www.datadrivenlab.org/urban.

Founded by Dr. Angel Hsu in 2016, Data-Driven EnviroLab is a research group based at the University of North Carolina at Chapel Hill with an interdisciplinary collaboration of policy experts, data scientists, visual designers, and interactive programmers. With a focus on sustainability and climate policy, DDL’s mission is to use cutting-edge data analytics to create solutions to the world’s environmental problems.