Measuring Climate Actions, One Commitment at a Time 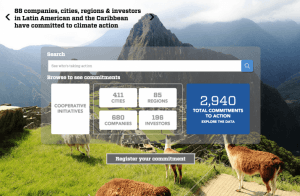 The Non-State Actor Zone for Climate Action (NAZCA), which launched at the Twentieth Conference of Parties (COP-20) Conference in Lima last December, records nearly 3,000 actions undertaken by businesses, cities, states and regions, and financial investors. What do these commitments mean for climate actors and the global community?

Annual United Nations climate negotiations often feel like deja vu. Ambassadors from nearly 200 countries fly to a locale that alternates between the global North and South. These negotiators exhaustively debate pages of legal nuance, frequently coming to a deadlock over the use of one auxiliary verb (“should”) over another (“shall”). As we hurtle towards the December climate negotiations in Paris, however, this time feels different.

An alternative brand of diplomacy is beginning to invigorate COP 21 negotiators’ work to forge a new global deal among nation-states. New actors, including businesses, cities, states and regions, and civil society groups, have shifted the focus to actions taken outside of the official climate talks. IKEA, for one, announced in June its promise to use renewable energy to meet all of its energy needs by 2020, and other industry stalwarts are following suit with their own ambitious pledges. Cities too have issued public plans to green their energy portfolios. New Delhi for instance, has pledged to raise the share of renewable energy in government operations to 9 percent by 2017.

These actions from “non-state” (e.g., businesses and investors) and “sub-national” (e.g., cities and states) entities are featured in the Non-state Actor Zone for Climate Action or NAZCA, which launched at the December 2014 climate change negotiations in Lima. Four data providers feed commitments from cities, regions, companies, and investors into the website, to capture a more complete picture of what’s being done across different sectors and at the local level.

A quick scan of the platform’s homepage reveals the impressive breadth of engagement: the website showcases nearly 3,000 commitments to climate action. It is tough, however, to understand how this participation translates to a global or even sectoral context. It may seem like a huge number of urban areas are participating. But is this number actually impressive, given the sheer number of cities the world contains?

Digging deeper into NAZCA confirms that this groundswell of action holds real potential to accelerate climate change mitigation and resilient development. As of July 17, NAZCA participants hailed from 326 cities and 51 regions, representing approximately 12 percent of the global population. Many areas have focused their energies on improving urban environments by increasing energy efficiency and reducing greenhouse gas emissions. These actions have the potential to both improve the quality of life for and reduce the emissions of the 800 million people who live in these regions.

Not to be outdone, the private sector has submitted a host of robust commitments, with 864 companies incorporating emissions reduction targets, energy efficiency, and renewable energy initiatives into their business operations. More than 10 percent of these firms are among the world’s largest 2,000 companies, and their cumulative market value totals $8.574 trillion USD. This amount is equivalent to the national GDPs of Australia, Brazil, Canada, France, and Turkey combined.

More than 200 financial investors have promised to support climate action with specific financial contributions by 2020. This early timeline is critical because investments that support renewable energy development and public transit infrastructure will influence emissions for decades to come. The total investment could add up to as much as $53.4 billion by 2020, roughly 50 percent greater than the support governments and aid agencies dedicated to climate finance in 2013.

Across all sectors, reducing greenhouse gas emissions emerges as a priority. Three quarters of NAZCA’s commitments list emissions reduction as a goal. Approximately 96 percent of these goals are quantifiable, with targets ranging from a 0.3 percent to 100 percent reduction.

It is tempting to cast the 0.3 percent target as unambitious, but context is crucial. Cities and businesses come in many different sizes, hold diverse economic portfolios, and will grow at different rates. Therefore, a modest target from New Delhi may reduce as much carbon as larger commitments from the Ann Arbors and Hamburgs of the world.

Making Sense of the Bigger Picture

The capacity to aggregate the impact of different actors and sectors to get a birds-eye view of climate action motivates the creation of mega-registries like NAZCA.  But disparate categorizations of actions and units of reporting makes apples-to-apples comparisons difficult, creating an overarching challenge for NAZCA. Even a term as fundamental as “climate action” can trigger different definitions from different sources. Carbon Disclosure Project (CDP), carbonn Climate Registry, The Climate Group, and the Investor Platform for Climate Actions (IIGCC) currently feed data to NAZCA. They articulate their impact in a range of different units, ranging from greenhouse gas emissions reduction per unit of production, to the emissions reduction for each unit of revenue or number of full-time employees, square footage, or mile/kilometer. If data providers were to employ harmonized reporting practices, it would be easier to compare and add up the impact of distinct commitments.

NAZCA currently features more commitments from developed countries and from companies well-equipped to collect and report climate information, than from developing nations and firms based in these countries. NAZCA will need to expand its list of data providers to present a more complete story of climate actions at the global scale.  Eighty-one percent of the platform’s 894 city commitments and 95 percent of the platform’s 109 regional commitments are from high-income countries. Without data from developing countries, NAZCA misses the myriad climate actions that some researchers say are taking place.

The fragmented global landscape of climate action presents a challenge, but also a great opportunity, for NAZCA to become a one-stop shop for collective climate actions across the globe. The UNFCCC has an aggressive schedule to add more commitments, many timed with key events like September’s New York Climate Week coinciding with the UN General Assembly, to demonstrate the snowballing momentum of comprehensive climate actions towards Paris. Our analysis of the breadth and span of business, NGO, and sub-national climate action in NAZCA gives the sense that – for the first time – observers may be more inclined to take note of the dialogues happening outside Le Bourget negotiating zone than within its corridors.

In the lead up to Paris, new actors are widening the sphere of climate actions globally, applying a centrifugal force to dialogues traditionally held closely to the center of nation-state dominated diplomacy.

Elena Khusainova, a PhD student in Statistics at Yale University, and Kaiyang Xu, a Masters in Environmental Management candidate at the Yale School of Forestry and Environmental Studies (Yale F&ES), provided statistical support for the analysis in this piece. Chendan Yan, also a Masters of Environmental Management candidate at Yale F&ES, designed the infographic.  We also thank Brendan Guy of NRDC, Thomas Hale of Oxford University, Ian Ponce of the UNFCCC, and Blaise Desbordes of the incoming French COP21 Presidency for their support and feedback.

*Authors contributed equally to this analysis and are listed in alphabetical order.