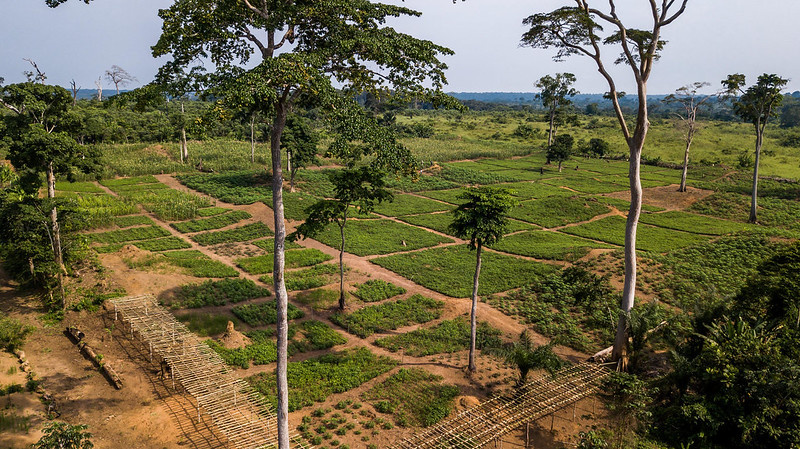 A new study finds that if fully delivered, emissions reductions from 17 climate initiatives would help put the world on course to achieve the Paris Agreement’s goals of preventing global temperatures from rising more than 2C. The Climate Policy article, which includes Data-Driven EnviroLab Director Angel Hsu and Research Associate Amy Weinfurter among its authors, finds that these 17 key ICIs could yield emission reductions on the scale of 18 to 21 equivalent gigatons of carbon dioxide per year (GtCO2e/year). Combined with the emissions reductions expected from national policies, this could bring global emissions down to 42 GtCO2e/year – well within the range for a scenario of less than 2°C of warming.

In recent years, international collective initiatives (ICIs) have become powerful drivers of climate action. These groups are diverse conglomerations of cities, states, regions, and/or companies, that often also involve national governments and international organizations, pursuing climate action goals. In addition to serving as important vehicles for the sharing of knowledge and resources, ICIs also have the potential to deliver impressive GHG emissions reductions.

The 17 ICIs investigated represent action in ten major emitting economies that collectively account for 69% of global emissions. These economies are Brazil, Canada, China, the European Union (EU28), India, Indonesia, Japan, Mexico, South Africa, and the United States of America. The report’s analysis indicated that the 17 ICIs could generate emissions reductions equivalent to a gigaton or more of CO2 each in China, Indonesia, the European Union, and the United States. Meanwhile, potential emissions reductions in the other countries are also on the scale of hundreds of millions of tons of carbon dioxide. Differences in GHG mitigation potential across these economies is unsurprising given their diverse contexts, as the regions vary along factors that range from governmental structure to sectoral focus.

Indeed, the report’s findings highlight that emissions reduction potential varies across not only ICIs from different economies, but also ICIs from different sectors. The 17 identified ICIs span eight sectors: energy efficiency, buildings, transport, renewable energy, industry and business, forestry, non-CO2 GHGs, and cities and regions. Strikingly, quantification of the ICIs’ global potential impact demonstrated that initiatives focused on businesses, forestry, and cities and regions could deliver GHG emissions reductions of more than 3 GtCO2e/year in each of these three categories by 2030. Collectively, these three sectors account for more than half of all emissions reduction potential identified, suggesting a need to support their efforts and encourage the development of concrete action plans. Conversely, few ICIs with high mitigation potential were identified in emissions intensive energy sub-sectors such as buildings and transport, indicating areas where additional ambition could produce much-needed results. 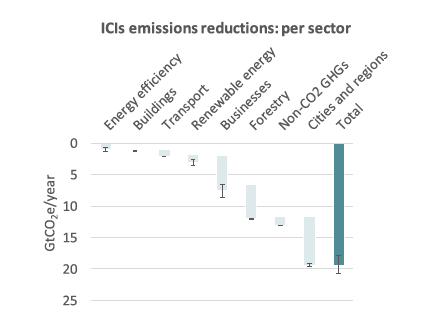 To ensure that emission reductions were not double-counted, the report’s authors developed their own three-pronged approach to accounting for possible overlap. They defined overlap as occurring if emission reductions take place in the same country, sector, and for the same greenhouse gas emissions. Moreover, they outlined three specific broad categories of overlap: duplicate goals overlap (when two ICIs have similar goals, activities, or members), targeted emissions overlap (when ICIs have different goals and activities, but the quantified emission reductions overlap or interact), and unspecific target setting overlap (when vague specifications of sectors or emissions target lead to possible double-counting). Beyond accounting for overlap according to these three categories, the report’s authors avoided overestimation of emissions reduction potential by including uncertainty ranges when necessary and making conservative assumptions based on robust decision trees.

This report limited its analysis to carefully selected 17 ICIs out of necessity by limiting its focus to initiatives focusing explicitly on emissions reductions while showcasing transparency, providing sufficient data, and demonstrating high-performance. However, in their thorough selection process, the report’s authors identified more than 300 ICIs aimed at supporting non-state actors that could also play important, albeit less obvious, roles in climate change mitigation. In particular, ICIs with activist or knowledge-sharing functions might make significant indirect contributions to emissions reductions. Given the authors’ comprehensive approach to quantifying potential overlap and decision to error on the side of conservatism, it seems especially likely that the potential contributions of ICIs to global GHG emissions reductions are larger than this analysis suggests.

The scale of these possible emissions reductions is undoubtedly impressive, but the likelihood of target implementation remains highly uncertain, as ICIs tend to set ambitious targets without establishing clear protocols for monitoring, reporting, and verifying actors’ work. Unfortunately, estimates based on current progress are less than inspiring. The New York Declaration on Forests, for example, aimed to reduce global deforestation by 50% by 2020, but suggested in its five-year report that achieving this goal would be “near impossible.” Not only that, but even if ICIs deliver on their targets, the actual implications for temperature outcomes remain somewhat uncertain. The latest science suggests global emissions of 42 GtCO2e/year yield a 66% chance of limiting warming to 2°C by 2100, and a 90% chance of warming lower than 2.4 to 2.6°C. This range is less than precise; notably, it also leaves us far from limiting warming to 1.5°C, which would require achieving somewhere between 22 to 31 GtC02e/year.

While the complete mitigation potential of ICIs remains unclear, one thing is certain – their effectiveness will be highly dependent on effective collaboration between diverse institutions and stakeholders from different countries. Ultimately, this report suggests that national governments must “further leverage and enhance cooperation with these initiatives if they are to correct the course of global emissions and accelerate efforts toward long-term carbon neutrality.” Its companion paper, which similarly draws on data from the 2019 Global Aggregation Report, reinforces these findings by further elaborating on the emissions reduction potential of non-state actors.