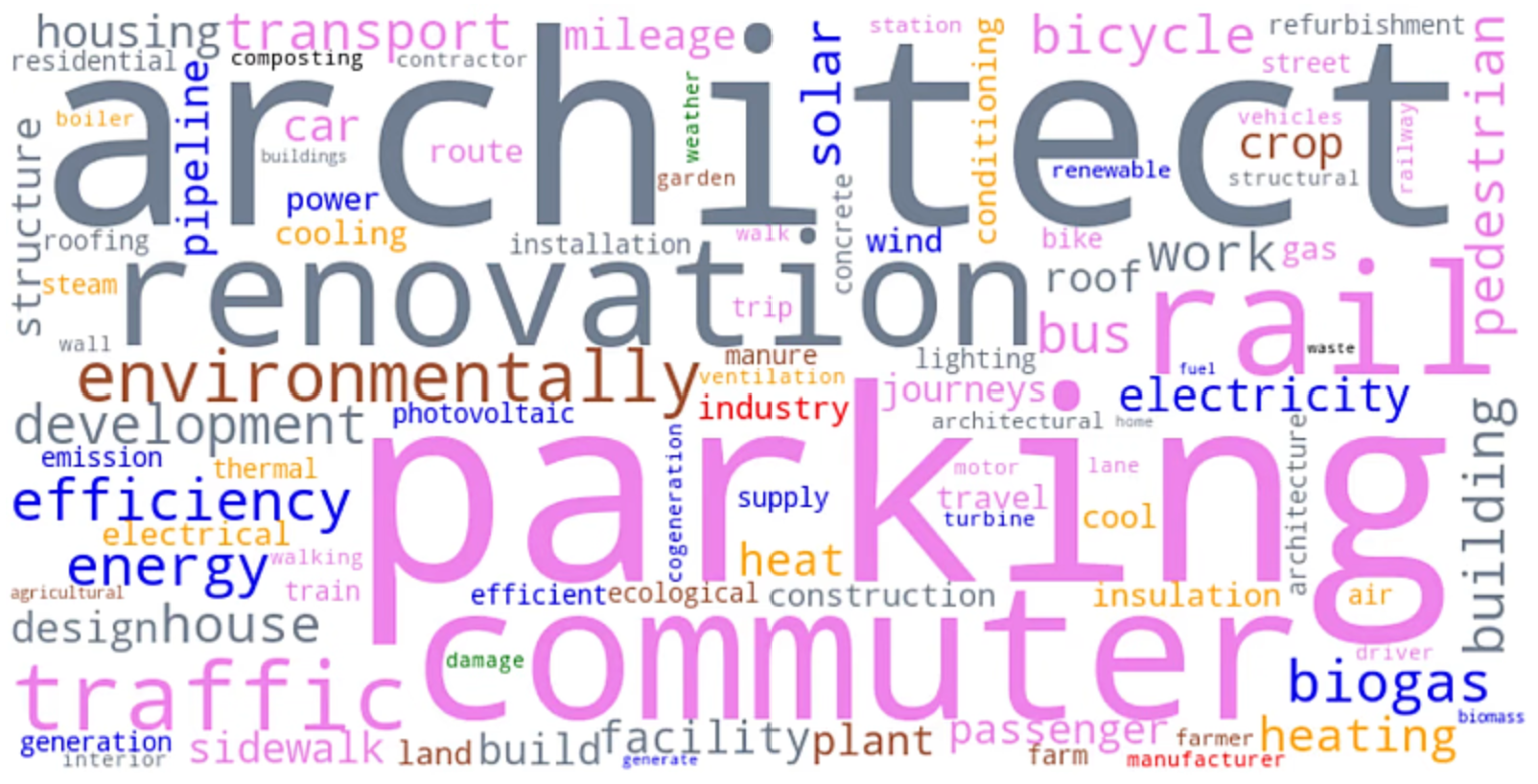 Read the paper published in npj Urban Sustainability. This blog was originally published in the Springer Nature Sustainbility Community.

The International Governmental Panel on Climate Change’s (IPCC) Special Report on Global Warming of 1.5 °C concluded that all pathways resulting in less than 1.5 °C of warming require global net- zero carbon dioxide emissions by around 2050, and net-zero GHGs around 2070. In the years since this report was published, we have seen a boom in net-zero target setting not only from countries, but also from cities, regions, and corporate actors. In total, 1,049 cities, along with 67 regions and more than 441 of the world’s largest companies and investors, have pledged net zero emissions goals, according to the Race to Zero campaign.

This wave of climate commitments is an encouraging sign, yet hope stemming from net zero commitments is tempered by uncertainty over what constitutes ambitious climate action. Many groups, from individual citizens to international non-governmental organizations, have increasingly called on city leaders to exhibit more transparency and regularly disclose progress toward their net-zero goals. There is still no standard universal definition for “net zero” when applied to individual actors since the IPCC’s original conceptualization was meant to be applied to the planet. It may be impossible for some municipal actors to credibly achieve net-zero emissions if they are embedded in a fossil-fueled economy, as cities’ consumption-based emissions can comprise two-thirds of their overall emissions. Most cities do not have unilateral control over their electricity supply, and  determining the percentage of an actor’s direct emissions that must be reduced to hit net zero remains a fraught and contested process. Should out of boundary or “scope 3” emissions be included if a net-zero claim is to be credible? The wide variance in how cities define, prioritize, and publicize climate action further complicates analysis of cities’ climate policies and actions, and some cities do not publish climate action documents at all.

To distinguish effective and ambitious climate action from “greenwashing” requires systematic evaluation of cities’ plans to achieve net-zero targets and analysis of the themes and terms that are associated with credible action. We performed such an analysis, seeking to accomplish two goals: (1) to determine text patterns that predict ‘ambitious’ net-zero targets (i.e., those that aim to reduce emissions by at least 80 percent, per the Carbon Neutral Cities Alliance Framework for Long-Term Deep Carbon Reduction Planning) ; and (2) to identify patterns and trade-offs in climate action themes across sectors. In our investigation, we applied machine learning-based natural language processing (NLP) techniques to published climate action documents from 318 cities.

In the first stage of our analysis, we used logistic regression – a statistical model used to predict a document’s probability of belonging to one of two classes – to explore traits common among ambitious net-zero plans. We found that language patterns differ significantly between cities with economy-wide net-zero targets and those without. The top predictive terms of whether or not a city pledges a net-zero target can be seen in Figure 1.

Our language study helped us understand possible indicators of net zero targets in climate plans, and we also sought to investigate the broader areas of action cities are pursuing. We developed keyword dictionaries associated with nine primary greenhouse gas-emitting sectors where cities are likely to be pursuing emissions reductions: land use, industry, buildings, transportation, electricity, heating, waste/pollution, climate impacts, and offsets. Then, we tallied the usage of all words in each of the nine dictionaries to identify how much cities discuss these action areas in their climate documents.

As shown in Figure 2, the frequency of common topics parallels the largest climate emission sources from cities – energy consumption from buildings and the transportation sectors. An additional investigation indicated  trade-offs between topics in city policies. Cities often emphasize energy at the expense of land-use and climate impacts, while pollution/waste and land-use are positively-correlated.

Figure 2. Median topic count for cities’ climate action strategies. In our sample of 318 cities, electricity, building, and transportation were the most prevalent themes mentioned.

We distilled cities’ strategies into two dominant themes, which we labeled “Ecology” and “Infrastructure,” after inspecting which topics were most strongly associated with each factor and applying our understanding of the trade-offs and complementarities among and between the nine topics. 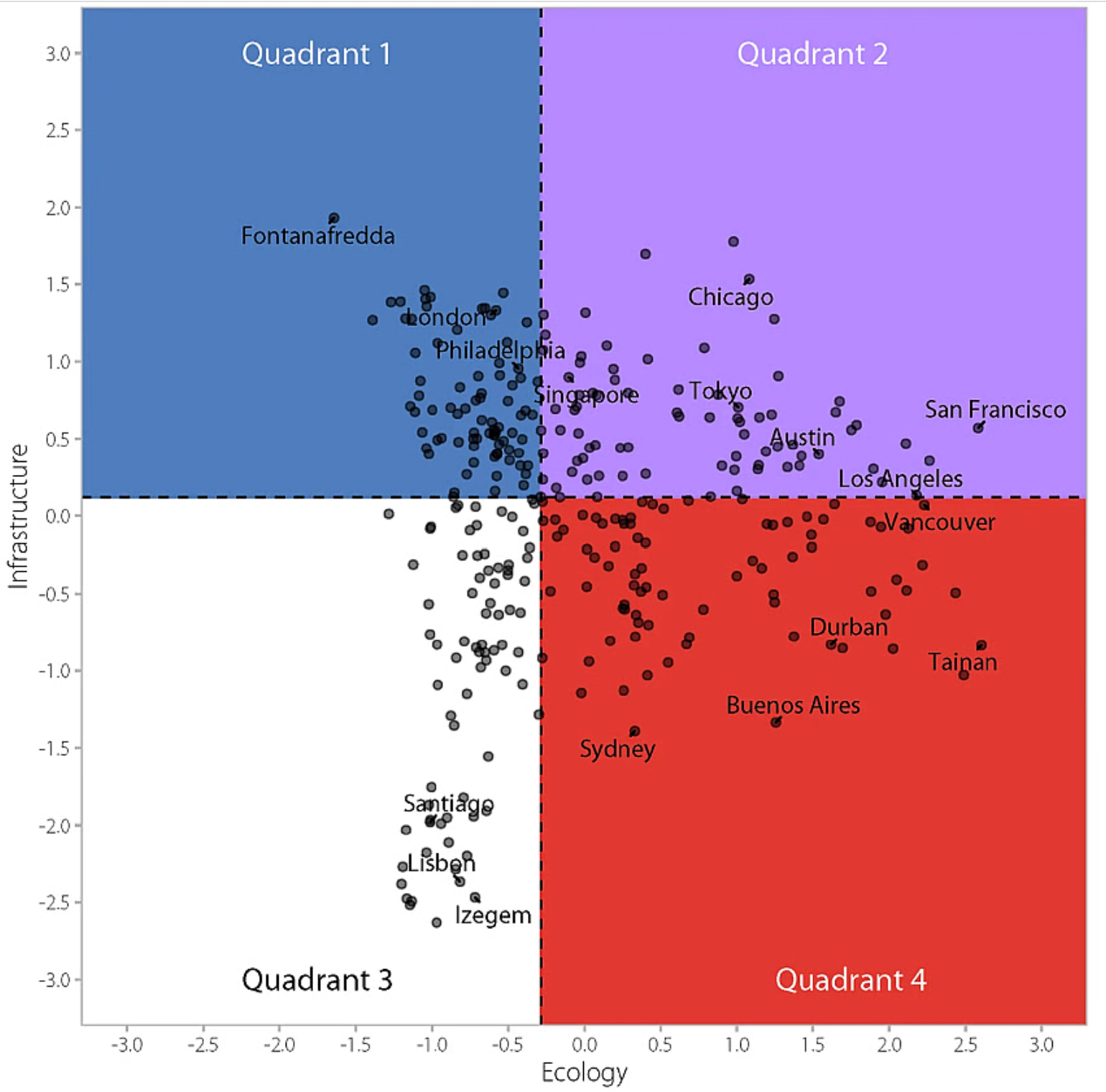 Figure 3. Quadrant plot of Ecology vs. Infrastructure. Cities’ climate strategies fall into one of four quadrants indicating their approaches and possible trade-offs in addressing climate change.

The “Ecology” factor is associated with topics focused on pollution/waste, land-use, and climate impacts, while the “Infrastructure” factor is associated with the heating, building, energy, and transportation topics. Plotting how “well” cities perform across these two factors in four quadrants (as shown in Figure 3) we can identify common themes in how certain types of cities plan to tackle climate action. Cities in Quadrant II focus equally on Ecology and Infrastructure approaches to emissions reductions, while cities in Quadrants I and IV focus on either Infrastructure and Ecology respectively. Cities in Quadrant III show little consideration for either Infrastructure or Ecology issues as we have classified them. City officials and researchers could use this typology to identify similar peers for knowledge and best practice sharing. This type of analysis could, in turn, improve coordination for  heightened overall ambition.

Additional cities have made net-zero targets since the time of this research, and our work provides a replicable, scalable approach to analyzing climate action plans. This study is also a first step towards facilitating cross-city learning. We find that cities with ambitious climate actions tend to emphasize quantitative metrics and specific high-emitting sectors in their plans. Cities emphasize energy-related actions at the expense of other sectors, including land-use and climate impacts, suggesting that many cities should adopt a more balanced approach. Our study represents an analysis of content rather than outcomes and does not predict whether ambitiously articulated climate plans result in achievement of results. Nonetheless, our research is a first step toward understanding what characterizes ambitious climate action and how different cities can help each other pick up speed to global decarbonization.

This post was written by Ian French, who received a BA (Honors) in Environmental Studies from Yale-NUS College in May 2022, and Angel Hsu, PhD, an Assistant Professor of Public Policy and the Environment, University of North Carolina at Chapel Hill.