China in Copenhagen Day 3: It's getting hot in here – Tuvalu raises the bar, China reacts

While the drama surrounding the Guardian’s leak of a “secret” Danish negotiating text seems to be fizzling down (see our previous post), this was most likely due in some part to a small island nation now famous here in Copenhagen. Yes, you guessed it – Tuvalu, a tiny Polynesian island occupying just 10 square miles of the Pacific Ocean.

During the morning plenary session today, however, the Tuvaluans were not as diminutive as the size of their small island state would suggest. After Tuvalu proposed the creation of a contact group for a ‘Copenhagen Protocol’ (full text of draft here), China’s apparent negative reactions sent the Tuvaluans to motion for a suspension of the talks. The proposed ‘Copenhagen Protocol’ would parallel the current negotiations regarding the Kyoto Protocol (KP). It would be stricter than Kyoto, and legally bind parties to keep global atmospheric CO2 concentrations to 350 parts per million and global temperature rise to 1.5 degrees.

While Tuvalu fears it will drown from sea-level rise, Tuvalu negotiator Ian Fry sought high moral ground today stating, “Tuvalu is one of the most vulnerable countries in the world to climate change, and our future rests on the outcome of this meeting.” Fry repeated the expectation of many nations to sign a legally binding deal by the end of next week.

Both developed and large developing countries like China and India responded strongly to Tuvalu’s proposal, stating that a 350 ppm cap on atmospheric concentrations would unreasonably constrain their economies. Their concern is to be expected, considering that CO2 concentrations already exceed 350 ppm and are currently closer to 400 ppm.

Tuvalu’s position is backed by the small island states (AOSIS) and some African nations and up to this point, all members of the Group of 77, the now 130-country block of developing nations. China’s reaction to the Tuvalian proposal marks for the first time a significant rift between China and the G77, both of which had thus far been consistent in their positions regarding major negotiating issues (e.g. supporting the UNFCCC and Bali Road Map). China’s position against Tuvalu’s proposal lies in their belief that 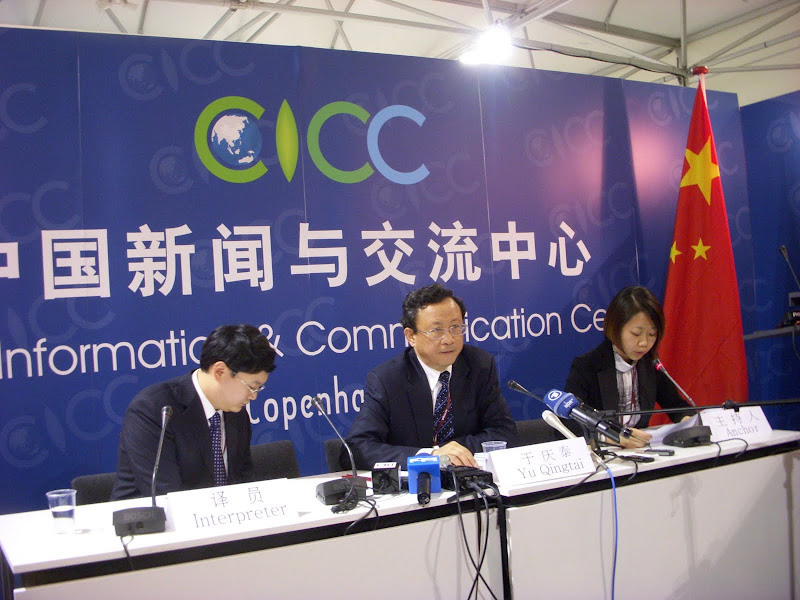 the Kyoto Protocol is strict enough to adequately address climate change and that the development of an additional protocol would amount to revisiting Kyoto, which China has opposed all along. They fear that the additional protocol would ultimately mean the end of the KP. China’s official concern is that revisiting the KP will result in a weakened deal after parties selectively pick and choose their preferred elements of the 1997 deal. If the KP were modified or if a new protocol were drafted, what China truly stands to lose is its protection from mandatory emissions reduction commitments. The notorious Danish text that had everyone buzzing on Tuesday is one of many examples of attempts to rope China into making commitments along with developed countries and other developing countries with major economies. A Copenhagen Protocol, though it has yet to be negotiated, could put China at risk of facing mandatory commitments.

In consolation, Ambassador Yu Qingtai (pictured center of photo), China’s Special Representative on Climate Change Negotiations from the Ministry of Foreign Affairs, said during a press conference this afternoon that China sympathizes with the plight of small island states, which are the most vulnerable to the effects of climate change. He pointed out that although China’s “basic circumstances” are fundamentally different from small island states, all developing countries are unified in their commitment to the principle of Common but Differentiated Responsibilities (CBDR, we will now officially keep track of how many times it’s mentioned by a member of the Chinese delegation). Ambassador Yu was quite clear in pointing the finger at developed countries, who he said are to blame for causing the global warming afflicting all developing countries. Still, Ambassador Yu reiterated that China was opposed to even the formation of the Contact Group. End of discussion.

No Money for China

In the meantime, China continues to press for funding for developing countries. In a meeting last Friday, Liu Yuyin, Climate Advisor of the Chinese Mission to the UN, told “Team China” that China is pressing primarily for funding that will support other developing countries. Ambassador Yu today also affirmed China’s commitment in helping to ensure proper financing mechanisms that guarantee developed countries support the cost for climate change mitigation, adaptation, capacity building, and technology transfer.

In response to a comment made during the European Union’s press conference today that China would not be the “first candidate” in line to benefit from such funding, Ambassador Yu reaffirmed Mr. Liu of the Chinese UN Mission, saying that China has never thought of itself as a “first candidate,” and that their main goal is to guarantee financial backing for an agreement to actually take effect. Good thing, especially since the United States’ position, as articulated today by U.S. Special Envoy for Climate Change Todd Stern, is also that China will have to look to other sources of funds, such as its own $2 trillion in reserves. [According to E&E News:]

I don’t envision public funds, certainly not from the United States, going to China,” Stern said. “There’s inevitably a limited amount of money. The amount ought to be as high as it possibly can be, but it’s necessarily going to be limited. That’s just life in the real world.

In the mean time, UK, Mexico, Norway and Australia released a proposal offering principles for a new climate fund. That this proposal is penned by a major developing country in collaboration with developed countries is a hopeful sign that moves the (money) ball forward.

Separately, we also attended a presentation by Tsinghua Professor He Jiankun. He made some “meaty” remarks, in the words of Deborah Seligsohn, Senior Fellow and Principal Advisor to WRI’s China Climate Change and Energy Program, on interpreting China’s carbon intensity targets. Deborah wiil be reacting to Prof. He’s presentation on ChinaFAQs.org.

While today the rumble is all about the China-G77 rift, we think it’s important to remember that until this point China and the G-77 have mainly spoken with one voice. The G77 and China dynamic will be an interesting one to watch over the next nine days.