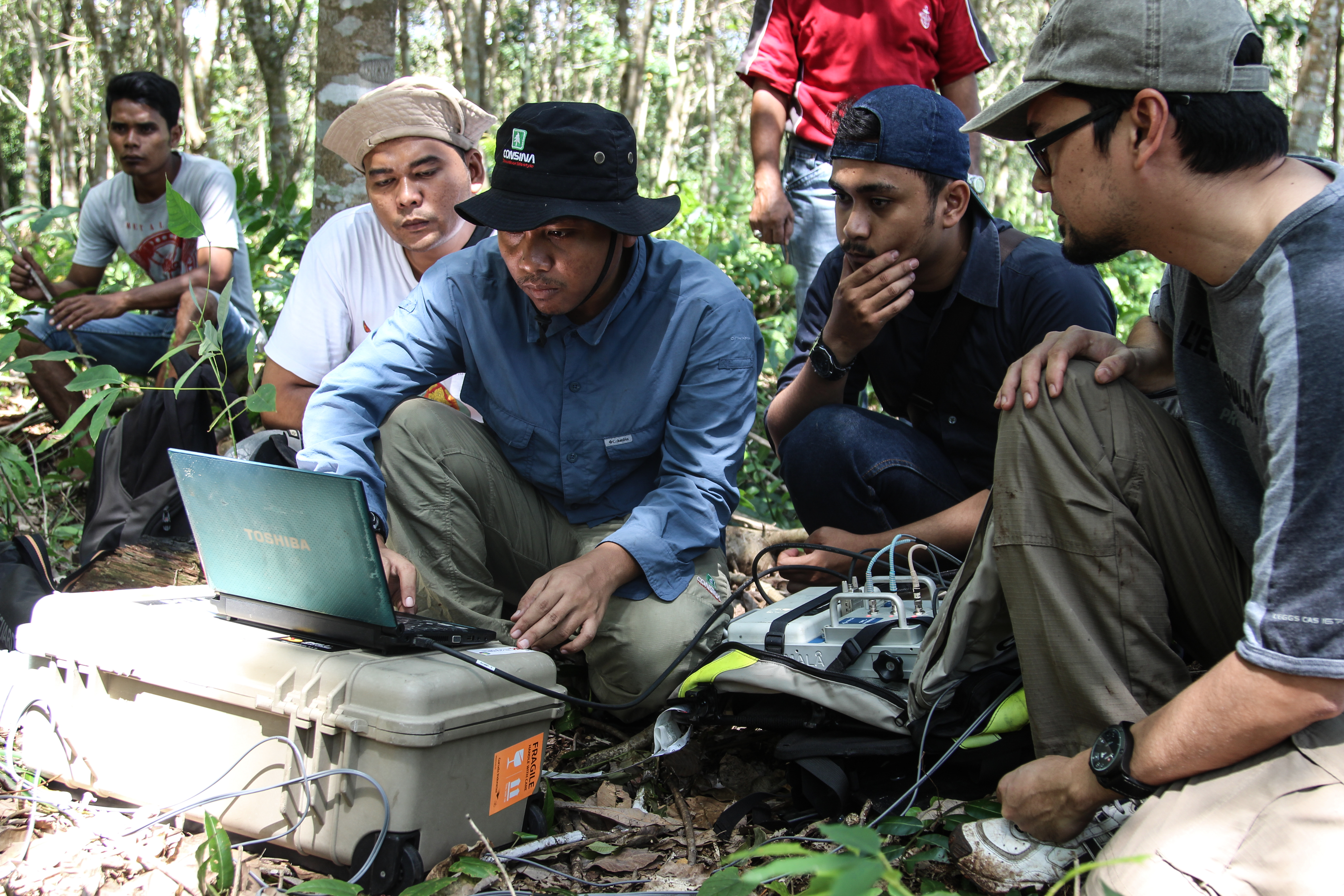 Carbon peat monitoring: A CIFOR researcher explains the use of Ground Penetrating Radar (GPR) to measure peat depth with professors and students from the University of Riau. Photo by Photo by Deanna Ramsey/CIFOR CC-BY-NC-ND 2.0.

With support from the National Science Foundation Science of Science Policy and Innovation Program, Data-Driven Lab will begin research that explores the potential – and possible pitfalls – of utilizing blockchain systems to analyze and support climate action.

A growing body of research has demonstrated the ways cities, states and regions, business, investors, and civil society (non-state actors) are increasingly catalyzing, implementing, and innovating new ways to mitigate climate change. In some cases, these efforts are more ambitious than national governments’ commitments. As the world struggles to move from its current trajectory – which puts it on course for 3 ℃ of temperature rise by 2100 – to a path that limits warming to the Paris Agreement goals of 1.5 or 2 ℃, these bottom-up efforts could help deliver and go beyond national governments’ current climate policies.

However, efforts to understand these voluntary climate efforts often face gaps in data coverage and tracking. Actors make commitments to reduce carbon emissions or adopt renewable energy, but there is little incentive for them to transparently report data that proves whether they are meeting their goals. Climate data are voluntarily reported and undervalued in climate governance, which trusts that actors will follow through on pledges. There is significant uncertainty as to whether these commitments will be met. Analysts also spend a great deal of time wrestling with and reconciling heterogenous data, a process that prevents a faster incorporation of research insights into policy discussions.

These challenges hinder efforts to understand whether global climate goals are being met. They stymy the ability to identify and share best practices among peer companies and local governments. Patchy data can also make it more difficult for different types of actors – for instance, a company, city, region, and national government all working to increase the use of zero emissions vehicles – to work together, creating programs that complement each other and reinforce a common goal.

Blockchains could help address these accounting and knowledge gaps. This technology refers to a shared, immutable digital ledger that makes, records, and verifies transactions or agreements — a transparent database, in other words, where all participants can see what’s been entered into it or changed. While often discussed in the context of bitcoin or cryptocurrency, its potential applications go far beyond this, from supply chain verification to digital voting to climate action. Combining blockchain with the Internet of Things (IoT)  – for instance, connecting a smart meter to a blockchain  –  could automate parts of the reporting process for specific interventions and sectors. Blockchain’s transparency could avoid any accusations of greenwashing, giving governments the confidence to build on and scale up these efforts in their own goals. A blockchain system could also make climate accounting easier, by synthesizing many different sources of climate action information into a single place, and using algorithms or incentives to encourage participants to fill data gaps and reconcile competing sources of information.

Despite these potential applications, there is not yet a clear understanding or any concrete frameworks for how this technology can be applied to the challenge of establishing accountability and incentives for climate actors. This research project will explore blockchain’s potential to increase our understanding of how climate actions are implemented, what they achieve, and how to build a sustainable and globally inclusive system that lowers measurement and reporting burdens.

Using an interdisciplinary approach that will leverage insights from academic researchers, industry partners, policymakers, and local governments and companies taking climate action, the project will design a novel framework and architecture for Blockchain Climate Action Tracking (B-CAT). This framework, developed in both theory and tested in proof-of-concept prototypes, will be used to define if and where blockchain and complementary technologies (e.g. IoT) can improve upon existing efforts tracking climate policy. The research will explore both the potential benefits and challenges of applying blockchain to climate action tracking. In particular, it will focus on four key questions:

A roundtable discussion, to be held during Climate Week in New York City, will kick off the project. Research updates will be shared on the Data-Driven Lab website, and through a Radical Collaboration and Blockchain for Climate Accounting blog series on Medium. To participate, learn more, or get involved, please reach out to Amy Weinfurter at amy.weinfurter@yale-nus.edu-sg and Willie Khoo at willie.khoo@yale-nus.edu.sg.