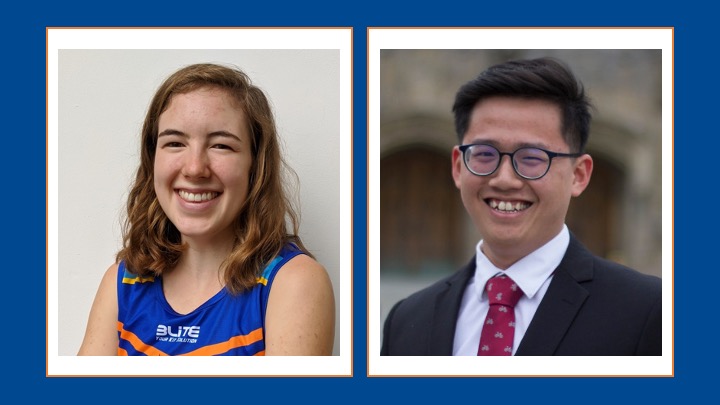 DDL would like to extend the heartiest of congratulations to Yale-NUS’s recently graduated class of 2020. We know and have worked with many of you and are immensely proud of what you have accomplished as well as the way you have demonstrated resolve and grace in this time of adversity. Of these graduates, we would like to single out Claire Krummenacher and Yeo Zhi Yi, two Research Assistants who have been awarded the Prize for Outstanding Capstone Project in their respective majors. We caught up with them to learn more about their work:

CLAIRE KRUMMENACHER
Bachelor of Arts with Honours
Recipient of the Prize for Outstanding Capstone Project in Philosophy, Politics, and Economics
Title of Capstone: Ya No Hay Nada Aquí Para Nosotros: International Migration Responses to El Niño in Guatemala, El Salvador, and Honduras

How did you arrive at your topic?

In choosing a topic, I was mostly fueled both by anger at the Trump administration’s anti-immigration policies and by alarm at the mounting effects of climate change in the Global South. Thanks to the research experience gained with DDL and Professor Anju Paul’s invaluable guidance, I was able to translate those emotions into an actual paper which found that even when accounting for the slow-acting impacts of climate change, severe El Niño events still have an extremely significant positive effect on migration from Guatemala, El Salvador, and Honduras to the United States in the subsequent two years. Surprisingly, however, the effect was only significant on documented migration (as opposed to undocumented migration) – meaning that the current policies designed to stem immigration (i.e., the border wall, family separation, increased ICE patrols, withdrawal of financial aid form Central America) are not only inhumane but also ineffective.

What are the implications of your work?

Given that the frequency and intensity of El Niño super events is predicted to escalate dramatically as a result of climate change, I recommend that future US migration policy seek to address the root causes of climate migration, strengthen source countries’ resilience to climate shocks like El Niño, and expedite the integration of Central American migrants.

What were some challenges you faced during the research and writing process?

As exciting as it was to get highly significant results, they should be taken with a grain of salt given that the metrics used to measure migration were imperfect estimators (for example, I was not able to capture the full effect of El Niño on undocumented migration since the US Department of Homeland Security only records the number of migrants who were actually apprehended – a mere fraction of those who actually cross the southern border).

What opportunities are there for further research?

Looking at the big picture, it would be most interesting to look beyond migration at the national level and see if areas which have been hit hardest by chronic drought – namely, the Central American Dry Corridor – experience a particularly intense surge in out migration in the two years following severe El Niño events.

Do you have any advice for those about to embark on their capstones?

For seniors starting on capstone, I would highly, highly recommend adopting Prof Paul’s advice to start as early as possible: brainstorm over summer, log useful sources in an annotated bibliography, gather literature. Starting early – and setting concrete goals for myself each week – allowed me to address major problems, work around data shortages, and produce several full drafts well in advance of the deadline. Some people work best at the 11th hour, but I am definitely not one of them!

And finally, you will be spending an entire YEAR with your capstone – choose a topic you are passionate about! It will inevitably get tedious and there absolutely will be moments where you’re about ready to throw your laptop, and when that happens it helps to be able to remember why you started down this path in the first place and draw on that reasoning to push through the slog.

I was looking for something that was at the intersection of data science and environmental studies, specifically marine issues (my area of specialization). As Prof Michael Maniates always says, research topics come from the literature – so I read up quite a bit on areas of research that were using data science for marine environmental issues and found out about fisheries data and thought that this would be an interesting topic to look into.

To the best of my knowledge, this is the first time that such indicators have been applied at a national level. Previous analyses only focused on large scales (more regional areas) and I think that my study served as a proof of concept for applying this form of analysis to smaller, national scales. Analyzing the data at this scale will hopefully create greater political impetus for action because it applies directly to the country in question. Apart from that, the study did show strong signs of ecosystem overfishing within Indonesia (something I would say was always expected, but not always concretely studied). Furthermore, the study looked not only at a single species of fish being caught, but tried to assess the overall ecosystem impacts of fishing in Indonesia. This form of analysis provides a broader picture to the issue and thus should also be of interest to policymakers in this field.

Challenges and opportunities for further research:

I think the usual challenges with working big data sources apply as well – making sure that the data is clean, processing the data to a level of usability etc. (I have to say I did get it easy because a lot of the data was already cleaned and processed by the research labs that I got the data from!) Apart from that, I think some other challenges was the fact that fisheries science was such a big topic and I was relatively new to it, so there was a lot of reading to be done.

There’s definitely loads of opportunities for further research. One thing would be applying the form of analysis to other countries within the region, a region that is often lacking in data or considered data-poor in fisheries studies. The analysis in this study was also more descriptive, so further analysis can also look into more causal relations for the reasons of ecosystem overfishing.

Don’t be afraid to ask for help! I benefited greatly from speaking to others throughout my capstone process, and received a lot of help along the way.

Hopefully working for a while before going to pursue further studies! The process has really helped hone my research and programming skills, and clarified my research interests. So hopefully I will be able to pursue grad school in the future continuing working at the nexus of data science and marine science