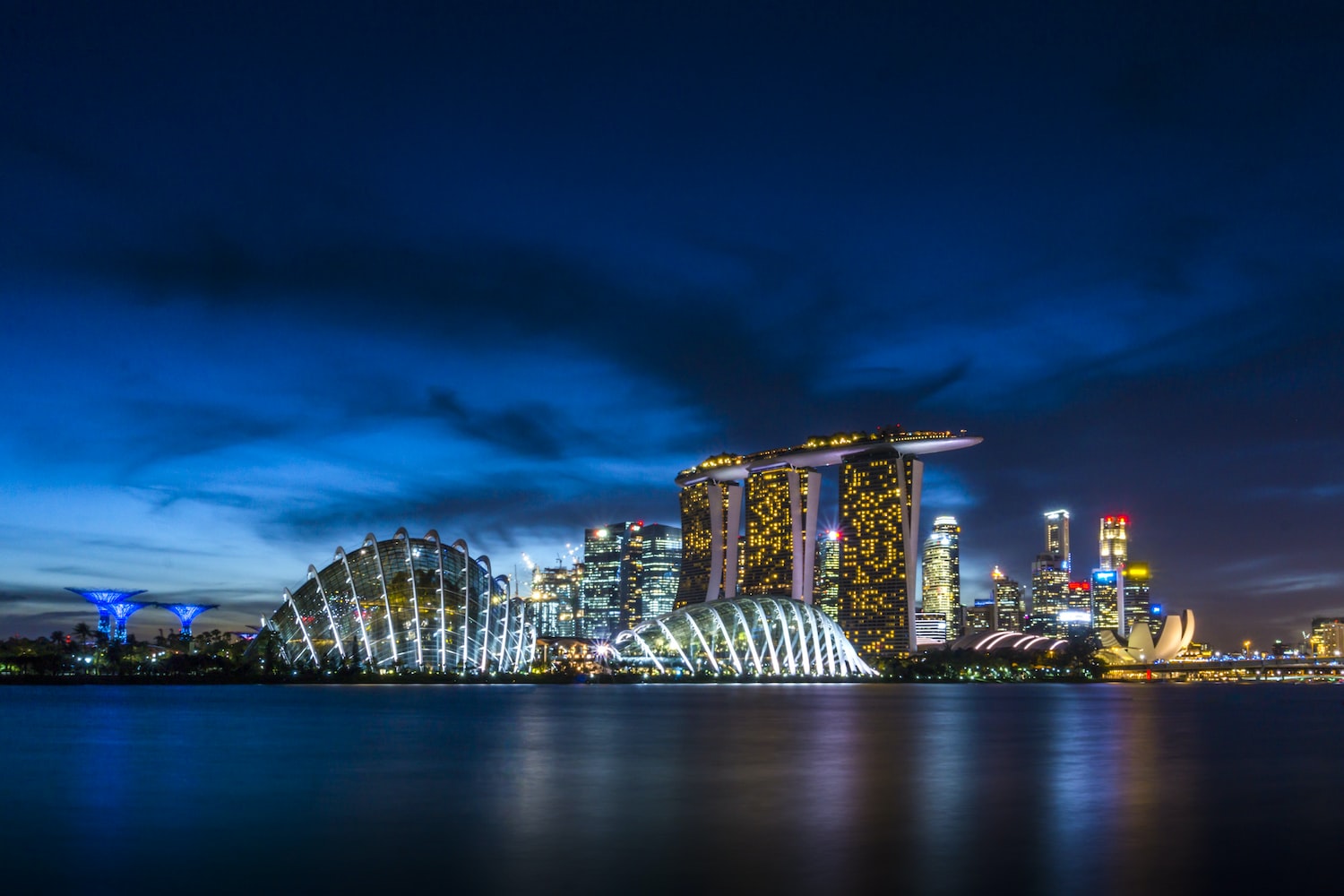 The Singapore skyline at night. Photo by Mike Enerio on Unsplash.

In a recent op-ed in The Straits Times, Tilak Doshi and Euston Quah criticize what appears to them as unreasonable measures to mitigate the effects of climate change in Singapore. Doshi and Quah argue that transitioning away from fossil fuels in Singapore would be costly and unnecessary, and push back against an earlier op-ed written by Professor Angel Hsu. Doshi and Quah’s article opposes a global environmental movement in fear of “the impact of such measures on the lives of ordinary working Singaporeans” and asserts that “Policies fashioned by green ideology will lead to Singapore collapsing economically first before it may drown in sea level rise.” Their argument is flawed because it both misinforms readers by not factoring in the economic costs associated with continuing to emit greenhouse gases and mischaracterizes the environmental movement as something that hopes to limit economic growth. Given the massive economic damage that climate change will cost Singapore as well as the plummeting costs of renewable energy, commentators who advocate for fossil fuels can no longer rely on economics to justify their adherence to the status quo. Moreover, recent developments in the solar energy sector could make Singapore a global leader in research and development, providing well paying green jobs.

HOW WILL CLIMATE CHANGE IMPACT THE ECONOMY OF SINGAPORE?

At the National Day Rally in August 2019, Prime Minister Lee Hsien Loong made combating climate change the centerpiece of his address. Describing climate change as “one of the gravest challenges facing humankind,” PM Lee pledged that the Singapore Government would commit S$100 billion over the next 100 years to protect Singapore from rising sea levels, and that the tiny island-state ought to treat climate-related risks as “life and death matters” akin to matters of national security.

PM Lee was not being alarmist. According to the Intergovernmental Panel on Climate Change (IPCC), unless the the global community restricts emissions well below the two-degrees Celsius threshold above pre-industrial levels, global average sea levels could rise 1.1 meter by 2100. This could submerge nearly a third of Singapore during high tide.

Singapore has already begun to adapt to rising sea levels by building climate-change resilient infrastructure, a crucial step to maintain the city-state’s international business competitiveness, but such steps are very costly. All MRT stations now have elevated entrances to prevent flooding and newly constructed developments must be at least 4 meters above mean sea level. In addition, critical infrastructure like the Tuas Port and Changi Airport’s Terminal 5 are slated to be at least 5 meters above mean sea level. Additional proposals include the installation of embankments and sea walls encompassing at least 70% of Singapore’s coastal areas. All of these necessary adaptation measures to make Singapore more resilient to the impacts of climate change add additional costs to ordinary tax-paying Singaporeans and demonstrate the economic costs associated with not rapidly decarbonizing the global economy.

In January 2020, the World Economic Forum warned that the top five most probable and consequential economic risks over the next 10 years would be climate-related. A recent op-ed in the Wall Street Journal predicts that “Climate crises in the next 30 years may resemble financial crises in recent decades: potentially quite destructive, largely unpredictable and, given the powerful underlying causes, inevitable.” Singapore is heavily reliant on global trade, so climate change will pose additional risks to the Singapore economy.

The McKinsey Global Institute estimates that climate-change-related temperature rise and rainfall variability will triple the probability of a 10% drop in wheat, corn, soybean, and rice yields (from 6% to 18%) between now and 2050. The report highlights that climate-related risks will present unpredictable disruptions to global supply chains and food systems, which could leave millions of people without access to food. Singapore imports 90% of its food and 95% of its energy (all of which is natural gas), which means not acting on climate change will have massive economic impacts for the country.

These additional costs for businesses and tax-paying residents are a direct result of greenhouse gas emissions from burning fossil fuels, yet the fossil fuel industry in Singapore pays little for them. Singapore has shown a tepid commitment to reduce greenhouse gas emissions by introducing a carbon tax in January 2019. Singapore should increase the carbon price, currently at S$5 (3.7 USD)/ton, which makes it one of the lowest prices on carbon across Asia, including Shanghai (USD 6), Beijing (USD 9), and South Korea (USD 21). Even Singapore’s plans to raise the price to S$10-15 (USD 7.4- 11.1) after 2023 are dramatically below the World Bank’s recommendation to meet the Paris Agreement carbon threshold of USD 40-80. A higher price on carbon could help the Singapore economy transition towards renewable energy.

Singapore’s Jurong Island – the site of some of the world’s largest oil refineries. Photo by ExxonMobil Asia Pacific.

HOW CAN SINGAPORE LEAD IN RENEWABLE ENERGY DEVELOPMENT?

Doshi and Quah rhetorically ask in their article: “If renewables including solar are so competitive, why do they often require huge subsidies?” A glance at the latest data shows that such a claim, while previously valid, no longer holds true today.

Since 2010, the costs of wind power has fallen by 49%, while solar power and battery storage costs have both dropped 85% according to Bloomberg New Energy Finance (BNEF). The cost of renewable energy has dropped so quickly that new projects are cheaper than fossil-fuel generated electricity, even without any government subsidies. In India, for example, a new competitive bidding process has driven down solar prices below coal-fired power plants, previously the cheapest energy-generating option.

BNEF expects global electricity demand to increase by 62% by 2050 and nearly half of the world’s electricity will come from wind and solar energy. Much of the energy-generating infrastructure that our world will use in 30 years has not been built yet, making renewable energy one of the largest investment opportunities in a generation. Although Singapore emits less than 0.1% percent of global greenhouse gas emissions, Singapore should continue to use its technological expertise and research to diffuse new innovations in solar energy to other Asian countries.

Doshi and Quah warn that “It is vitally important that we choose policies that are based on a careful analysis of costs and benefits and informed decision-making such that rationality prevails.” The business community in Singapore has already conducted such an analysis and has begun to decarbonize its investments.

Following ample scientific evidence of the threat of climate change, businesses and other non-state actors have stepped up commitments to transition away from fossil fuels, and financial institutions in Singapore are at the front lines. In 2017, City Development Limited (CDL) and Development Bank of Singapore Limited (DBS) began issuing green bonds to help finance renewable energy projects. In 2019, DBS, the Oversea-Chinese Banking Corporation (OCBC), and the United Overseas Bank (UOB) announced that they would stop financing coal projects. Singapore’s central bank, the Monetary Authority of Singapore (MAS), has formed a network with seven of its counterparts overseas called the Central Banks and Supervisors Network for Greening Financial System to share best practices in green financing. These actions demonstrate that upon careful analysis, decarbonizing the economy makes economic sense.

Doshi and Quah argue that “countries should be allowed to go green at a pace desired by their citizens, and at a price they can afford.” However, it is clear that the people living in Singapore, as well as the businesses operating in the city-state, are deeply concerned about the impending costs of climate change. Transitioning away from fossil fuels is both morally just and economically necessary, and this global transition will continue whether or not Singapore is on board. Singapore’s government should encourage the transition away from fossil fuels and refine its comparative advantage in researching, developing, and financing new low-carbon technologies. These actions could make Singapore a world leader in sustainable development.