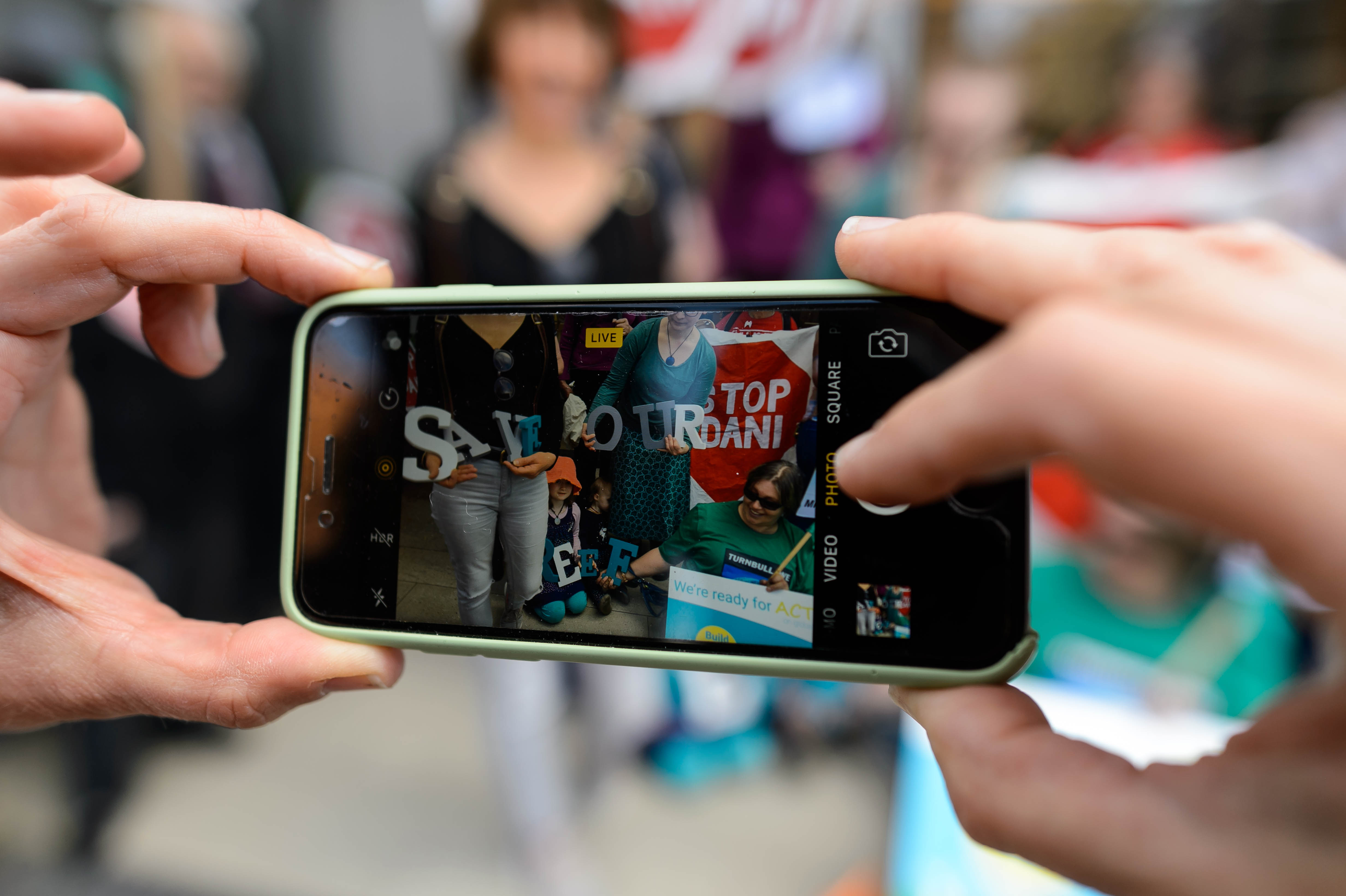 Photo of protesters opposing an Australian coal mine. Photo by Julian Meehan via John Englart (CC-by-SA).

As 2020 rolled in, Twitter users leveraged a trend of capturing #2019InFiveWords to document the urgency of climate action. The UN noted that “#ClimateChange is happening NOW,” citing the forest and bush fires that blazed around the world as one example of how “#ClimateChange drives climate disasters.”

In the wake of the disappointing (lack of) outcomes from the 25th Conference of the Parties, or COP-25, the annual global climate talks, many suggested that it will be #ClimateAction – bottom-up efforts from cities, regions, companies and civil society – “that decides our future!”

With that in mind, Data-Driven Lab has compiled several themes that have shaped climate action over the past year, and may define efforts to tackle climate change in 2020.

Over four million people across 163 countries joined protests calling for a meaningful response to the threat of climate change. Cities, states, companies, and civil society have stepped up, even as many countries’ national ambition wavers. The Global Climate Action Portal currently holds over 25,000 climate actions pledged by over 17,286 cities, regions, companies, investors, and organizations, a stunning increase from the 5,000 actors and 10,000 commitments the platform captured during 2015.

These commitments could have a meaningful impact on the global effort to reduce greenhouse gas emissions. Commitments made by over 6,000 cities and regions and 1,500 companies in 10 of the world’s largest-emitting economies could reduce global greenhouse gas emissions by 1.2 to 2.0 gigatonnes of carbon dioxide equivalent per year by 2030, beyond the reductions expected from current government policies, according to an analysis from researchers including Data-Driven Lab. These cuts are on par with large global emitters, adding up to more than Canada and Japan’s combined greenhouse gas emissions in 2016. But it will take significant financial and technical resources, along with political will, to ensure these actors can deliver on their goals.

2020 will be a make-or-break year for the Paris Agreement, which hinges on countries’ regularly updating their national climate action strategies, to help global emissions reach net zero by 2050. The next round of these United Nations climate talks, set for November 2020 in Glasgow, Scotland, will be a high profile look at how countries are rising to this challenge.

So far, 114 countries have signaled plans to unveil updated climate action plans in 2020. These could move the world closer to a path that reaches the Paris Agreement’s goal of capping global temperature rise below 2 ℃. Countries’ current commitments overshoot this target, and, if unrevised, would put the world on a path for 3°C of warming by 2100.

Bottom-up action could help give these governments the confidence to aim for the ambitious action needed to reach the Paris Agreement’s goals. In the EU, for instance, local government and company pledges could lead to an emissions reduction of up to 48 percent below 1990 levels by 2030 — a 20% jump from the region’s current goal of at least 40 percent.

A recent paper from Data-Driven Lab and other researchers found that few countries’ Nationally Determined Contributions – which outline their plans in support of the Paris Agreement – formally draw on the city, region, and company climate action underway within their borders. In 2020, this might change. A large coalition of 14 regions, 398 cities, 786 businesses and 16 investors has come together to work towards achieving net-zero carbon dioxide emissions by 2050, as part of the Climate Ambition Alliance. The COP-25 talks highlighted bottom-up actors’ importance in “reducing emissions and adapting to the adverse effects of climate change.” The year ahead may see more coordination among these actors as they reach for more ambitious action.

Information about bottom-up climate action remains incomplete. The global research community has identified – and is working to fill – gaps around climate action in developing and emerging economies. This information is a first step towards ensuring the global agenda speaks to the perspectives and priorities of actors working in many of the places where global warming may hit hardest.

Researchers have also highlighted the need to track the implementation of these commitments. Determining if – and why – cities, regions, companies and coalitions meet their targets can build confidence in these actions, and weed out attempts at greenwashing.

The COP-25 outcome also underlines the importance of tracking progress towards bottom-up action, asking the UNFCCC Secretariat to work with these actors to enhance the effectiveness of the Global Climate Action portal, “including the tracking of voluntary action.” Data-Driven Lab joined others in the climate data community to begin developing a framework for tracking bottom-up actions, to be shared at the upcoming COP-26 conference.

Emerging technologies have the potential to reduce some of the barriers to data collection. In 2019, Data-Driven Lab prepared to kick off a three-year project, supported by the U.S. National Science Foundation, to explore the potential benefits and challenges of leveraging blockchain technology to track climate action pledges. Workshops at the UN Climate Action Summit in New York and the COP-25 conference in Madrid gathered climate experts and technology specialists to brainstorm how digital technologies can be leveraged to strengthen climate action tracking. While not a silver bullet, tools like these could help streamline data collection, enable new ways of incentivizing climate action tracking, and sharpen the picture of climate action participation and progress.

Technology’s impact can be especially powerful when it draws on new or unconventional data sources. For instance, Data-Driven Lab Director Dr. Angel Hsu joined other researchers in outlining ways citizen science can help measure progress towards the Sustainable Development Goals, including Goal 13, which calls for urgent climate action. Data-Driven Lab researchers dove into a specific example of this in two papers exploring China’s Black and Smelly Waters app, where citizens are using smartphones to help flag urban water pollution, and hold local leaders more accountable for its clean-up.

This kind of data can help policymakers hone in on high-priority or high-risk areas. For instance, a paper from Data-Driven Lab researchers drew from the Index’s approach to reveal how lower-income neighborhoods have a disproportionately higher exposure to urban heat. In 2020, the Index will be updated and scaled up to include over 160 cities. As the need to address climate change grows even more urgent, these kind of tools can help policymakers act with the urgency the climate crisis calls for.