Amid extreme weather, city and company climate action is more important than ever 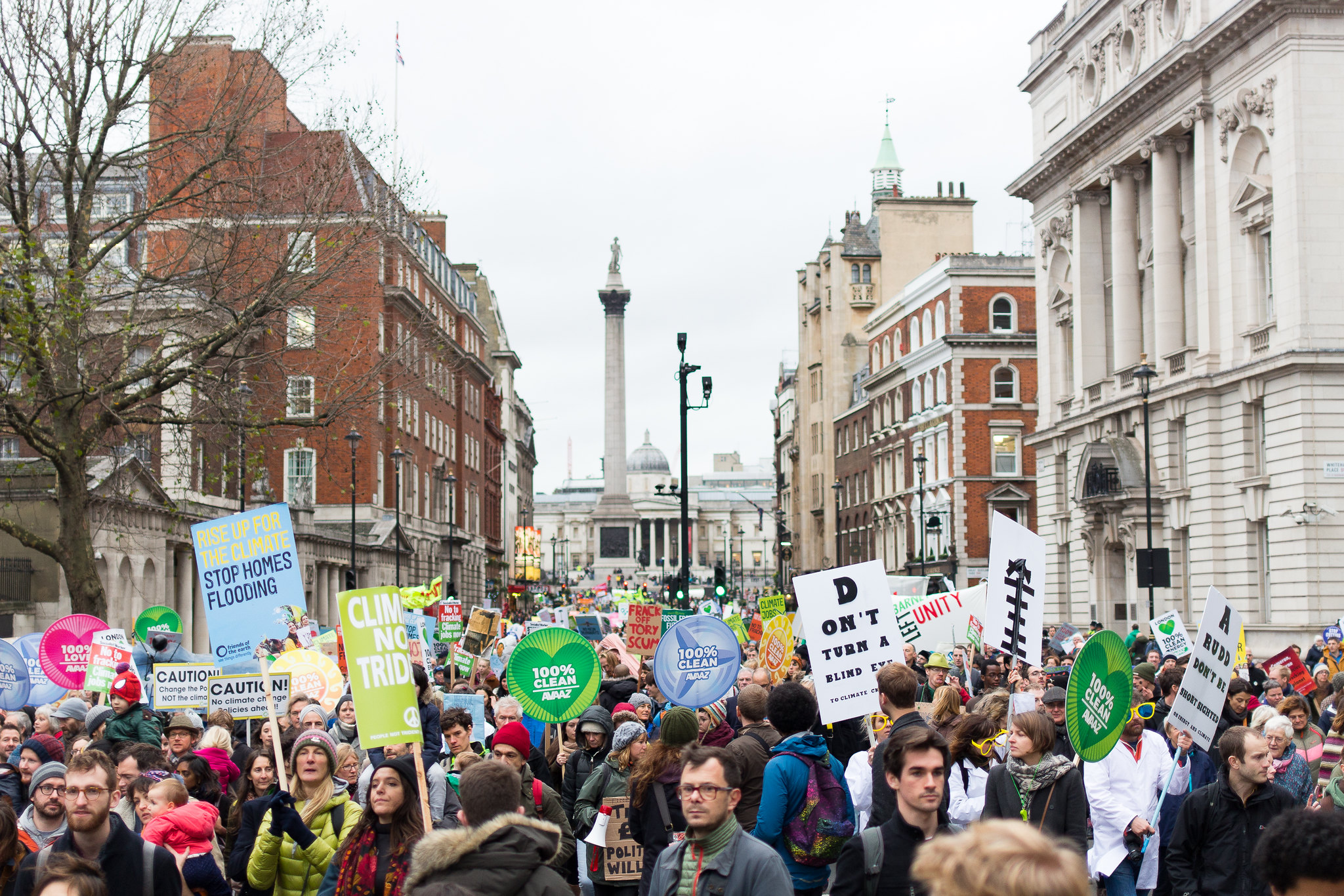 by Angel Hsu and Brendan Mapes

Temperatures in the Pacific Northwest have recently reached record-breaking levels — over 100 degrees Fahrenheit. Residents of Portland, Oregon saw temperatures exceed 116 degrees on Monday — an all-time high. Drought conditions have sparked concern that wildfire season in California is escalating “ahead of schedule.” Amid these alarming headlines, global leaders have failed to mobilize sufficient effort to tackle climate change, which will drive more frequent heat waves and extreme temperatures in the future.

June’s G7 meeting was criticized for failing to produce substantial coordination on climate policy, where leaders largely repeated their previous climate commitments. Only a few short months are left until leaders will pick up on international negotiations in Scotland at the UN COP-26 negotiations to further the ambition of the Paris Agreement.

There is a glimmer of optimism in the potential for a broader band of actors to fill gaps where national governments are lagging. In a recent report, an international research team including our organization evaluated an “all of society” approach to tackling climate change, taking stock of the contributions of thousands of subnational and private actors. Here are five key takeaways that provide some hope for a path forward:

1. Despite the COVID-19 pandemic, cities, state and regional governments and businesses are not backing down from climate action.

Nearly 2,000 cities, 124 regional governments and more than 800 businesses have pledged voluntary climate emission reduction goals aimed for between now and around 2030. These numbers represent a 470 percent increase in the number of pledges for the 2025 to 2035 time period compared to 2019. With entities increasingly setting mid-century decarbonization goals — what science tells us needs to happen for us to avoid the most dangerous impacts of climate change — interim targets en route to these loftier goals are essential for generating credibility and progress that weathers shifting administrations.

For example, it’s easy for New York City Mayor Bill de Blasio to commit the city to decarbonize by 2050, but he won’t be mayor for the next 30 years to ensure it happens. New York’s interim targets help chart that path with clear benchmarks. With concerns of greenwashing and government and corporate actors pledging climate action as a public-relations stunt, seeing evidence of short- and mid-term targets in the near future — now and up to 2035 — bolsters credibility.

2. City, region and business pledges can narrow the emissions gap — to a similar degree as COVID-19’s colossal impact on global emissions.

Economic disruption, government lock-downs and stay-at-home measures due to COVID-19 resulted in the largest, historic drop in global greenhouse gas emissions — an estimated 7 percent, or India’s entire carbon emissions in 2018. The world has not seen a drop in carbon emissions like this since pre-World War II, and scientific scenarios show that we have to see a COVID-like impact on emissions every year from now until 2030 if we’re going to reach a global 50 percent reduction goal to keep the 1.5 degrees Celsius goal within reach.

When we aggregated 2030 emission reduction pledges from these more than 2,000 subnational and corporate actors in 10 of the highest emitting economies, we found that their efforts would lead to an additional 2.0 to 2.5 Gigatonnes CO2-equivalent (CO2e) of reduction potential on top of national governments’ current climate policy efforts. While it’s not quite a COVID-like impact on global emissions, it’s pretty close. And the nearly 2,000 entities analyzed are just the tip of the iceberg — there are many more cities, regions and companies who haven’t yet recorded mid-term pledges.

3. When these efforts are scaled up, and frequently in partnership with national governments, we can get even closer to our climate goals.

A second-level analysis in our report shows the scaled-up potential when cities, regions and companies reduce emissions as members of various International Cooperative Initiatives (ICIs), such as the New York Declaration on Forests, which aims to halt deforestation by 2030, or the Climate and Clean Air Coalition, which focuses on tackling potent methane and HFC emissions. If the ambitious targets of these ICIs are realized, it could lead to a reduction of 16 GtCO2e/year below emissions projections under current national policies for 2030 — bumping global emissions close to the range for a 2-degrees Celsius emissions pathway.

4. Tracking who is actually walking the walk, we evaluated progress toward these largely voluntary pledges.

For the first time, we collected multiple years of emissions inventory data to see whether subnational and corporate actors are implementing their targets and helping to realize that 2.0 to 2.5 gigatonne CO2-equivalent potential. What we found is that more than half of the subnational governments and 80 percent of companies are on track to achieve or even overachieve what they set out to accomplish. These results are encouraging, since they indicate that action is taking place and these actors are not just making empty promises about decarbonization.

5. If we account for upstream and downstream emissions — reduction potential can be even higher.

We have made a first step in assessing supply chain emissions by analyzing the impact of electric vehicle (EV) sales targets from car manufacturers on total GHG emissions in the EU-27 and UK, the U.S. and China. Here, we found that limiting some manufacturers’ supply chain emissions through increasing EV sales could have an impact on overall emissions at the country level. In one case, we found that if General Motors were to implement their commitment to eliminate gasoline car sales by 2035, overall emissions from passenger vehicles in the U.S. could decrease by up to 8 percent.

With all that in mind, we must temper our optimism with some sobering realities at the same time.

While the 470 percent increase in mid-term targets is impressive, we found a significant portion of these targets did not exceed the emission reduction pledges of their national counterparts. An “all of society” approach relies on many of these bottom-up actors exceeding or going beyond national government ambition. After all, a UN evaluation of national government’s Paris Agreement pledges found that they leave us headed towards a more than 3 degree Celsius world in 2100 — well above the 1.5 degree target that could avert some of the worse impacts of climate change. If subnational and corporate targets don’t go beyond these paltry national government targets, then there’s really no sense in placing our hopes in them.

Another reality is that, because of the lack of data on subnational GHG emissions inventories, we could only evaluate the progress of a fraction of entities that have made pledges so far. Less than one-quarter of cities and less than half of regions and companies actually reported more than one year of emissions inventory data, which is necessary for progress evaluation.

For more than half of these actors, we can only assume they’re following through in good faith. Furthermore, while we found the achievement number to be quite a bit higher for companies — around 80 percent are on track — this statistic might be a symptom of a relatively lower level of ambition reflected in corporate target-setting compared to city or regional targets.

While there’s a lot of exciting and promising potential for cities, regions and businesses to fill gaps in much-needed climate action, if they’re going to make bold pledges, they must back them with real, hard data and evidence of their achievements.

For these entities to support the “virtuous cycle” of ambition that the Paris Agreement was built upon, subnational and corporate actors must pressure their national government counterparts to lead by example.

Angel Hsu is an assistant professor of public policy and environment, energy and ecology at the University of North Carolina-Chapel Hill.

Brendan Mapes is a research associate at the Data-Driven EnviroLab based at the University of North-Carolina Chapel Hill.

Hsu and Mapes’ organization the Data-Driven EnviroLab (along with the NewClimate Institute, Utrecht University and other partners) recently released the third edition of the “Global Climate Action of Cities, Regions, and Businesses report,” which evaluates an “all of society” approach to tackling climate change.