On June 22, I joined a team of energy experts on a field trip to Ruicheng county in China’s Shanxi province. Shanxi is known as “the sea of coal,” and is responsible for almost a quarter of China’s total coal output. However, officials and experts in this small county introduced us to the region’s enormous wind and solar farms, all built within the past five years. 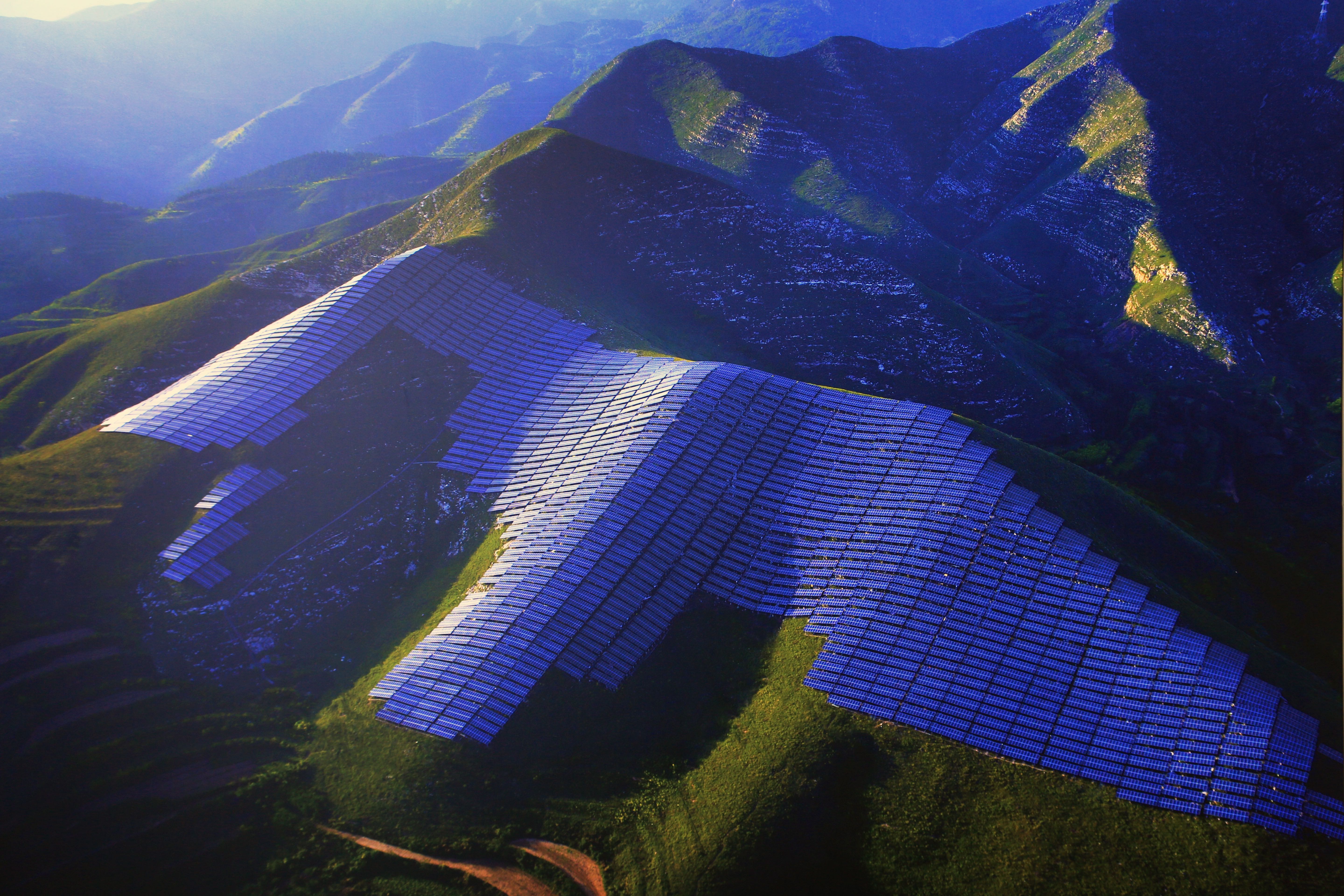 Mr. Liu Yuegang, the Deputy Governor of Ruicheng, told us that renewable energy has become the leading industry in Ruicheng. It invigorates the future of an old county known for its historical heritage. However, the challenge ahead is the “post-subsidy era,” as the national subsidy for renewable energy is diminishing to let renewable producers compete directly with coal-fired power plants. How will Shanxi transition from “the sea of coal” to clean energies? Ruicheng is an exciting case study in its rapid transition.

The Ruicheng Solar PV Leading Technology Base was approved by the National Energy Administration of China in June 2016. It is the only county-level project among the eight national Solar PV Leading Technology Bases. With a total investment of 8.8 billion RMB (1.28 billion USD), the government of Ruicheng will build 1,000 megawatts (MW) of solar panels over two construction phases. This means that Ruicheng will boost Shanxi’s solar capacity by more than a third, from the province’s total solar capacity of 2968.3 MW at the end of 2016. 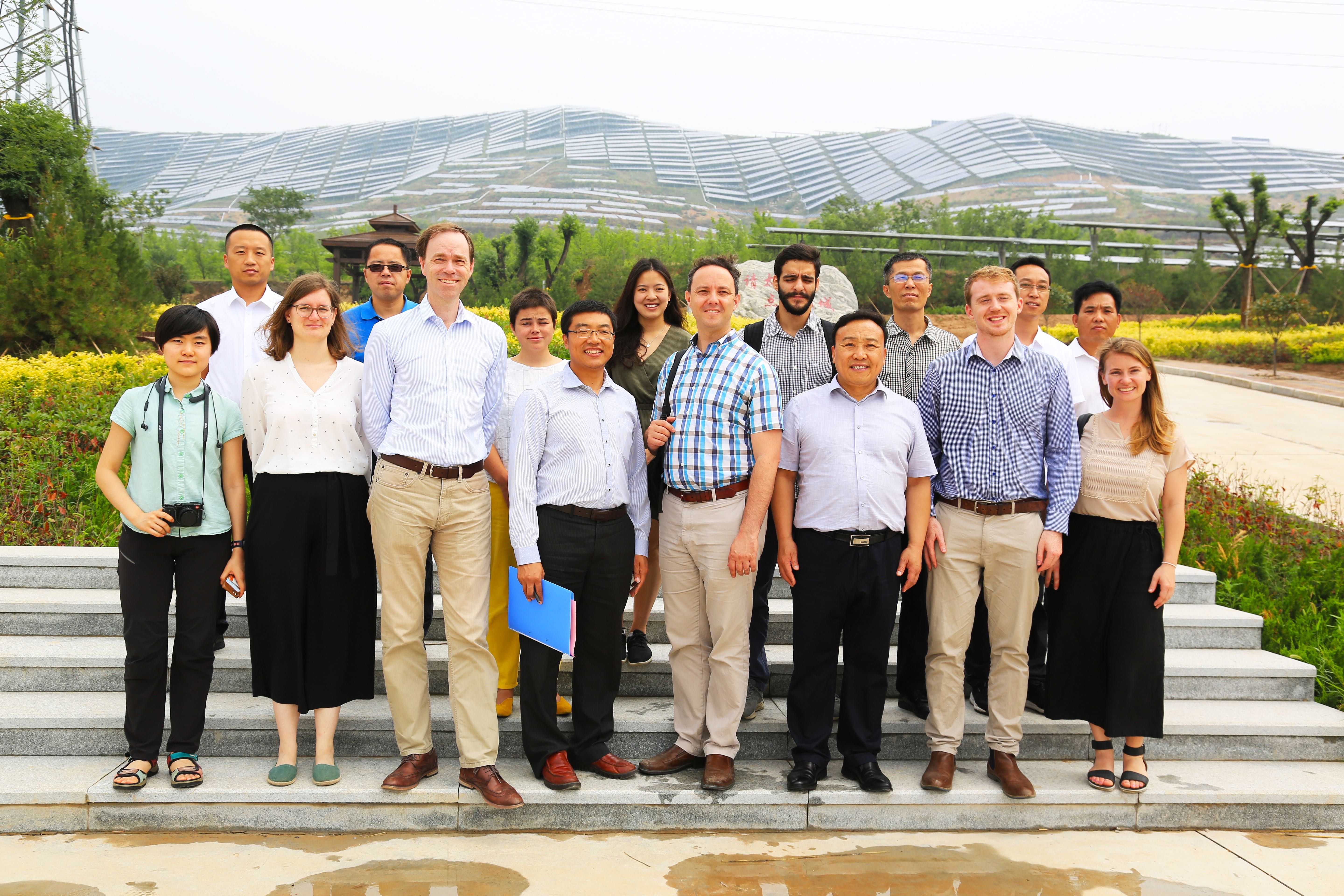 We visited the solar farm in a misty morning, but the sunlight still made it hard to open our eyes. (Photo credit: Xiyao Fu)

The first phase of construction covered 19500 mu (13 square kilometers) of land with 500 MW of solar power. It has been in operation and integrated to the grid since September 2017. The second phase is still under construction. The whole project is operated separately by three state-owned enterprises and four private companies that won the bid from the local government. A technician from Xiexin Solar — one of the seven companies — showed us their operation and maintenance center. Their solar farm of 74 MW capacity is maintained by only seven regular staff. The technician told us the solar panels are working at 70% of their generation capacity even on such a misty day. In addition to the abundant sunlight, the dust-free environment of rural Ruicheng reduces the panels’ cleaning cost. 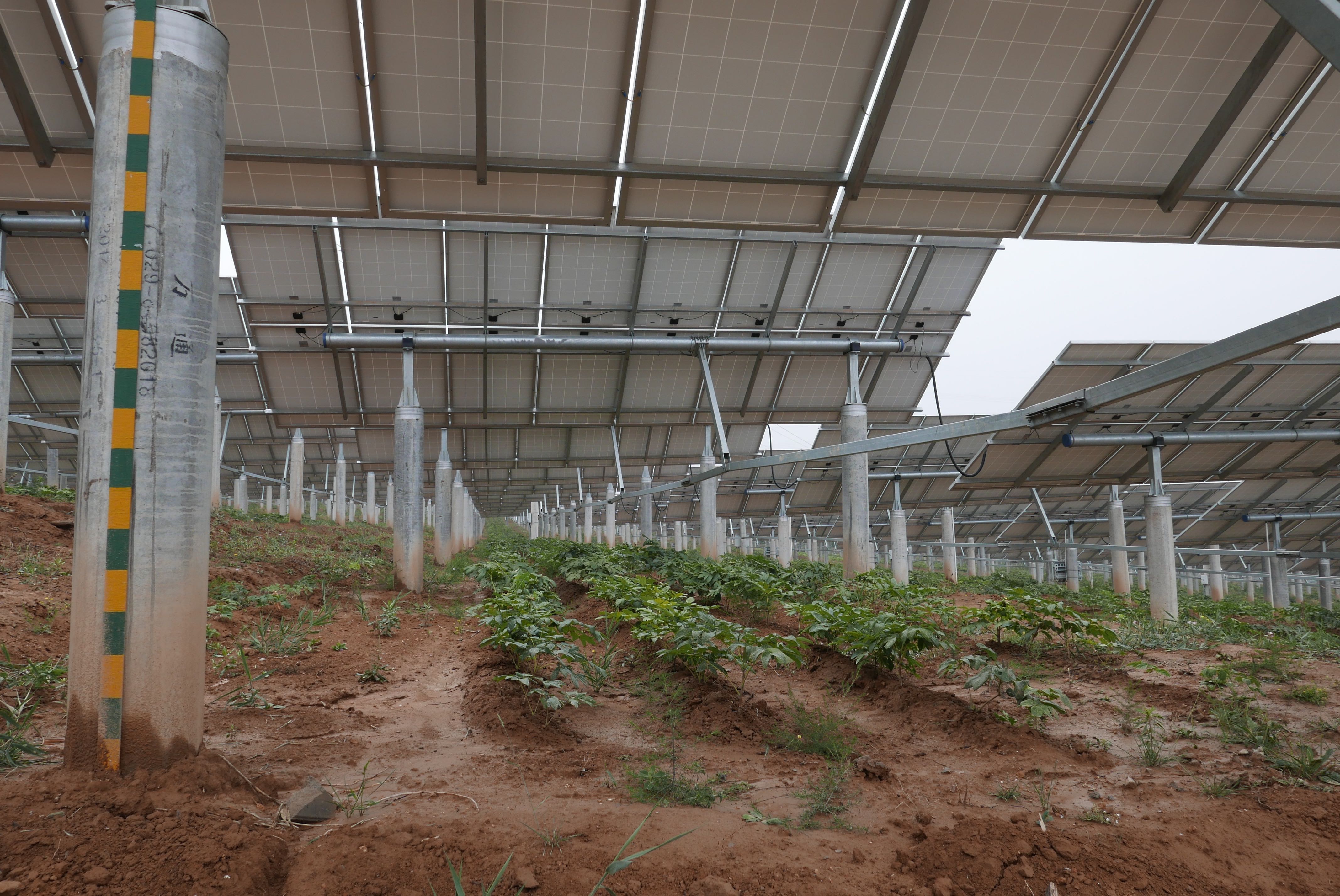 Walking close by, I recognized that rows of plants are growing under the panels. The solar panels are made over 1.8 meters tall which allows farmers take care of the peony plantations underneath. Our guide explained that Ruicheng adopted a combination of “farming-forestry-solar.” The government chose to plant peony, because its decorative flowers, herbal roots and oil-producing seeds will generate more income for local villages. Mr. Liu Yuegang told us that over 2000 local farmers are employed in peony plantations. The solar companies pay annual land rental to villages. Overall, the local farmers will get additional income of over 26 million yuan per year from building the combined mode of solar base.

After the solar base is completed, the Ruicheng government expects it to drive economic and social development. First, it will add 1.2 billion yuan to Ruicheng’s annual GDP and generate 150 million yuan of revenue. Second, the investment funds from participating solar enterprises have expanded the local financial deposit and loan business, promoting the healthy development of the county financial industry. Last but not least, as the peony plantation matures, the solar farm will be become an eco-tourism destination, providing local employment opportunities. 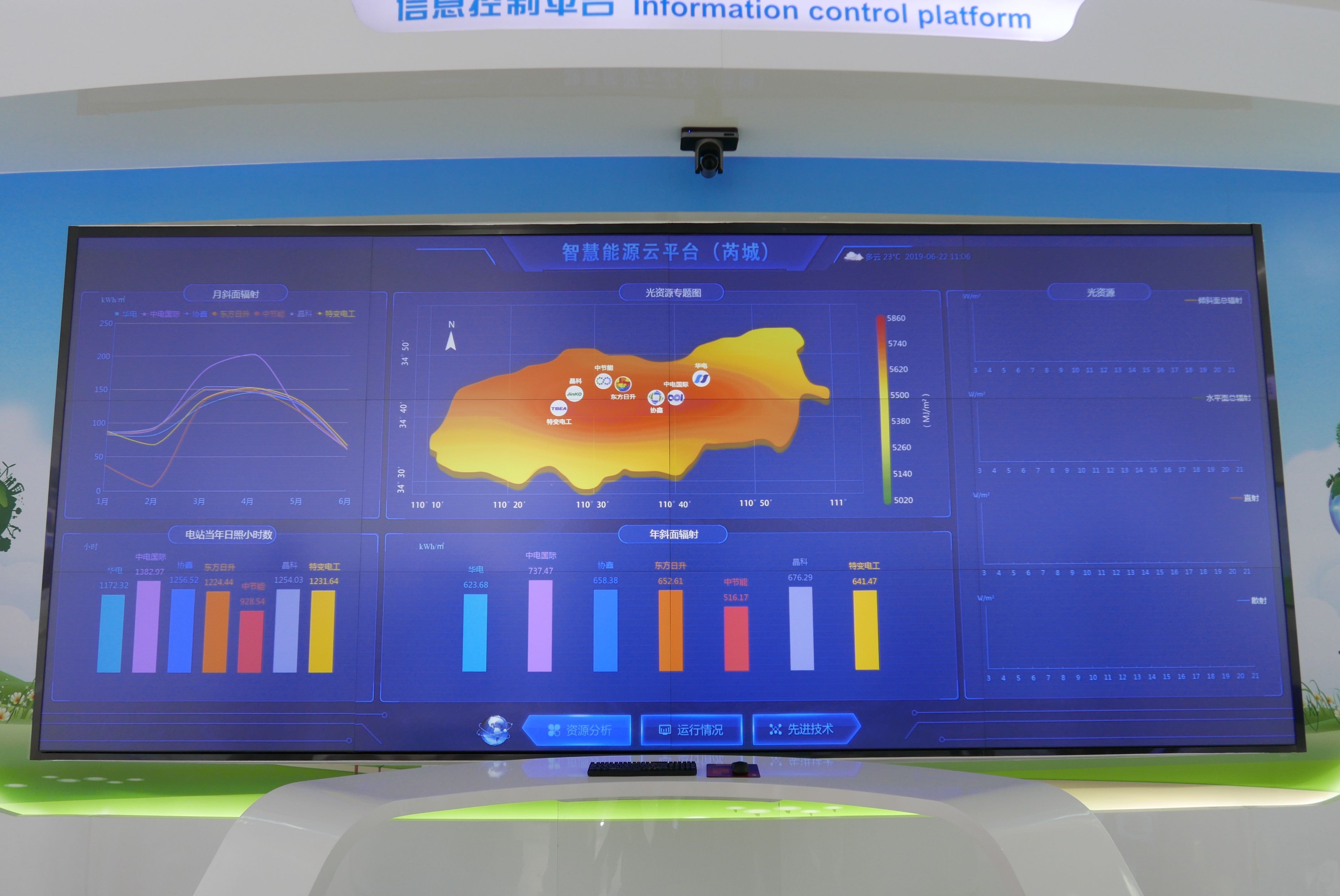 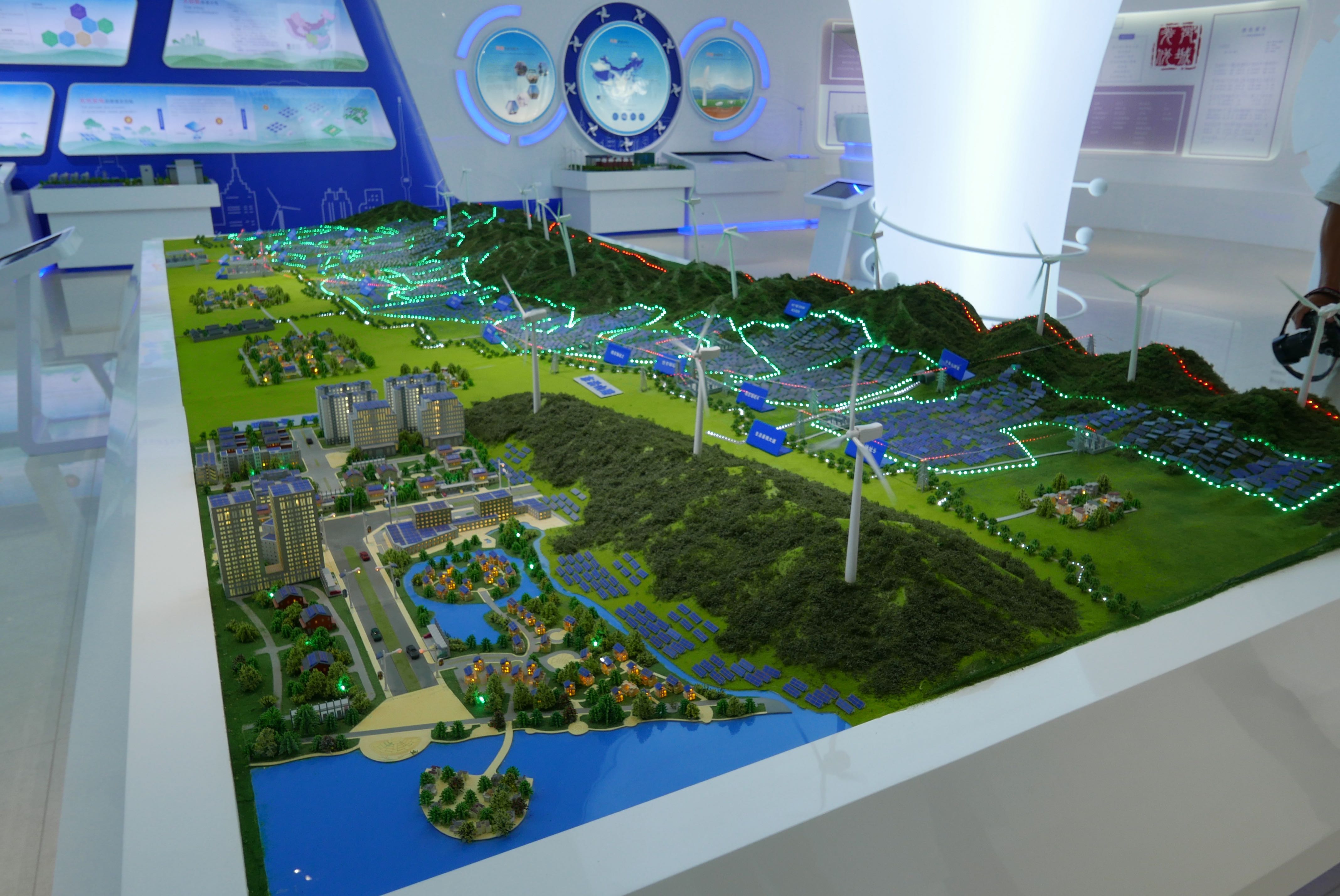 A conceptual model of the solar and wind farms, with a renewable energy town which is still in the process of planning in the Ruicheng New Energy Exhibition Hall. (Photo credit: Xiyao Fu)

From the solar farm, we travelled to Ruicheng New Energy Exhibition Hall, located next to a transformer. Our guide said that the Exhibition Hall will function as an education base for students and scholars to learn from Ruicheng’s experience. A huge screen displayed the central monitoring system, which compares the real-time performance of seven solar companies. In the middle of the exhibition hall, a model depicts the future of rural Ruicheng: wind turbines line up on top of the hill, solar panels cover the hillside facing south, huge transformers lie downhill, and a “Renewable Energy Town” is covered with roof-top solar panels.

The wind farm shown in the model was also a stop of our field trip. It is owned by China General Nuclear Power Corporation (CGN) and deploys wind turbines from Goldwind. With a total capacity of 69.5 MW, it has generated 34.16 million kWh in the first half of 2019. Despite swift installment and expansion of wind and solar, renewable energy is still dwarfed by thermal power in Shanxi. The wind and solar farms together can generate around 800 million kWh of electricity per year, but this is solely 2.6% of the total electricity consumption of 31,120 million kWh in Yuncheng, the administrative area where Ruicheng is located.

In fact, most of the “green electricity” generated in Ruicheng is not consumed locally, but sold to the neighboring province of Hubei through a pilot spot market. In China, each electricity producer is allocated certain annual utilization hours, feed-in tariffs and retail prices at the beginning of the year. The fixed quota does not match the intermittent production of renewables and leads to waste, or curtailment, of surplus electricity. In contrast, a pilot spot market allows renewable producers to sell their electricity directly to industrial users in a price set day-ahead. Thanks to the pilot spot market in Hubei, the CGN wind farm is able to achieve zero curtailment. A technician from CGN told us that, although electricity price is lower in Hubei than in Shanxi, it is more profitable to sell the daily generation out than to waste the surplus away.

Curtailment of renewable energy is not unique to Shanxi. Professor Shi Jingli, who works at Energy Research Institute of National Development and Reform Commission of China, reported in July this year that market-based electricity trading accounted for more than 30% of total electricity consumption in 2018, while eight regions have started to run pilot spot markets. The wind curtailment rate across China has decreased from 17% in 2016 to 7% in 2018, and the goal is to reduce it further down to 5% by 2020. Again, Ruicheng is in the forefront of the reform in China’s electricity system. 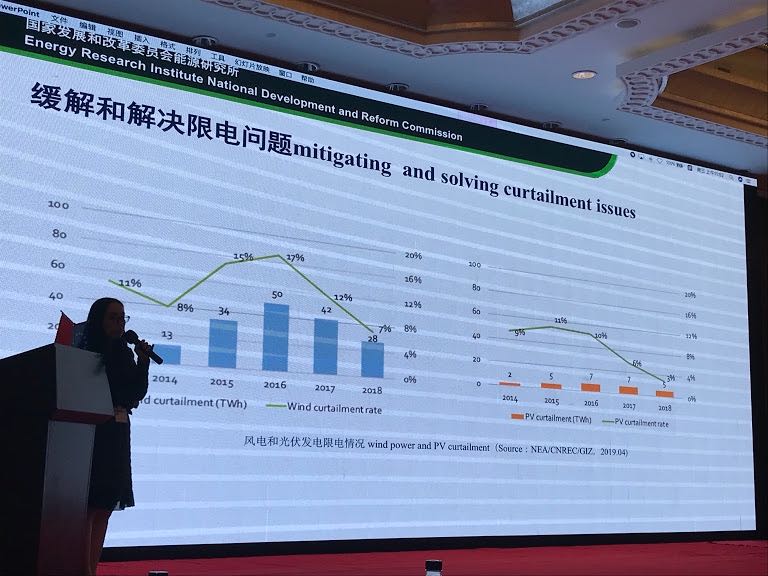 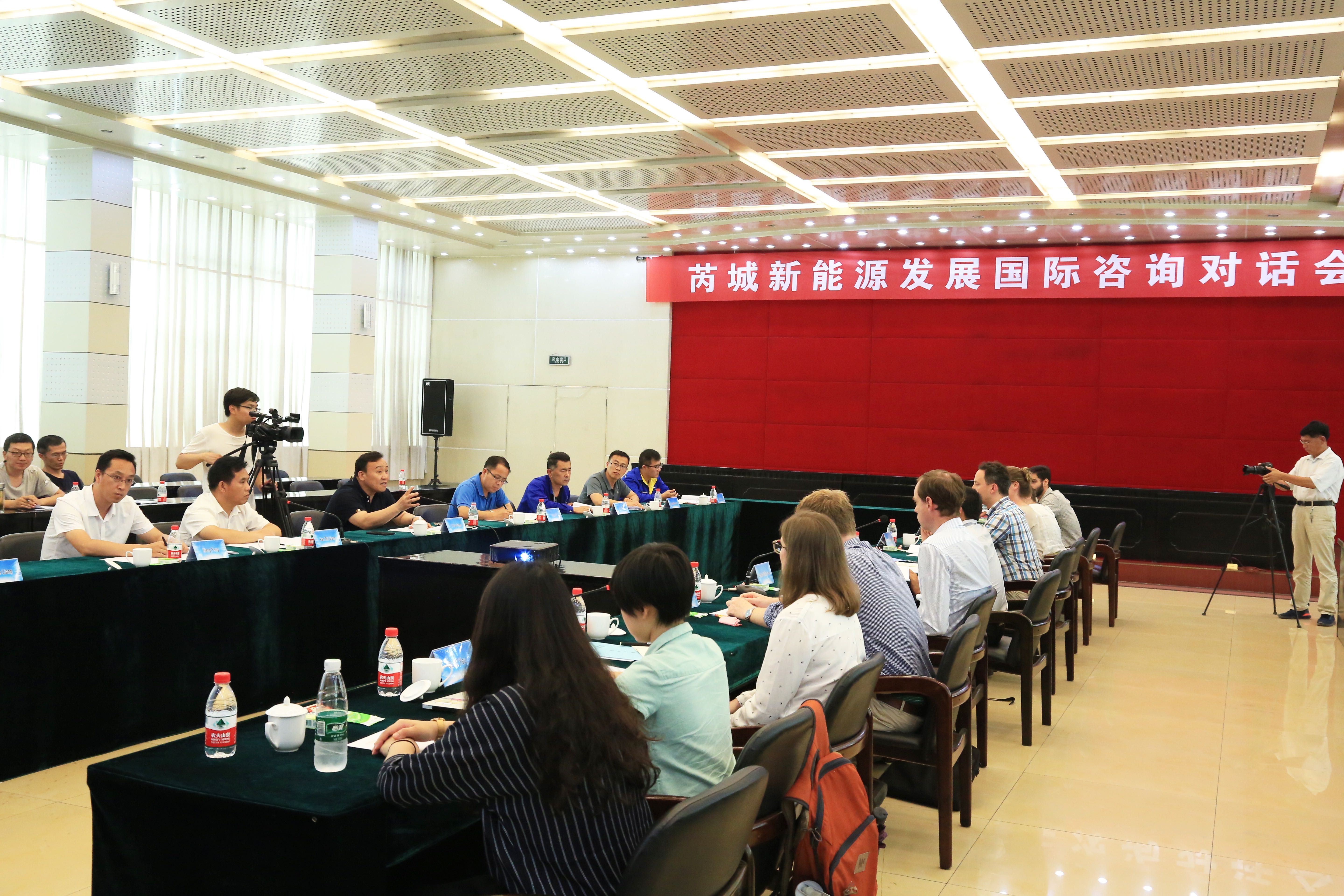 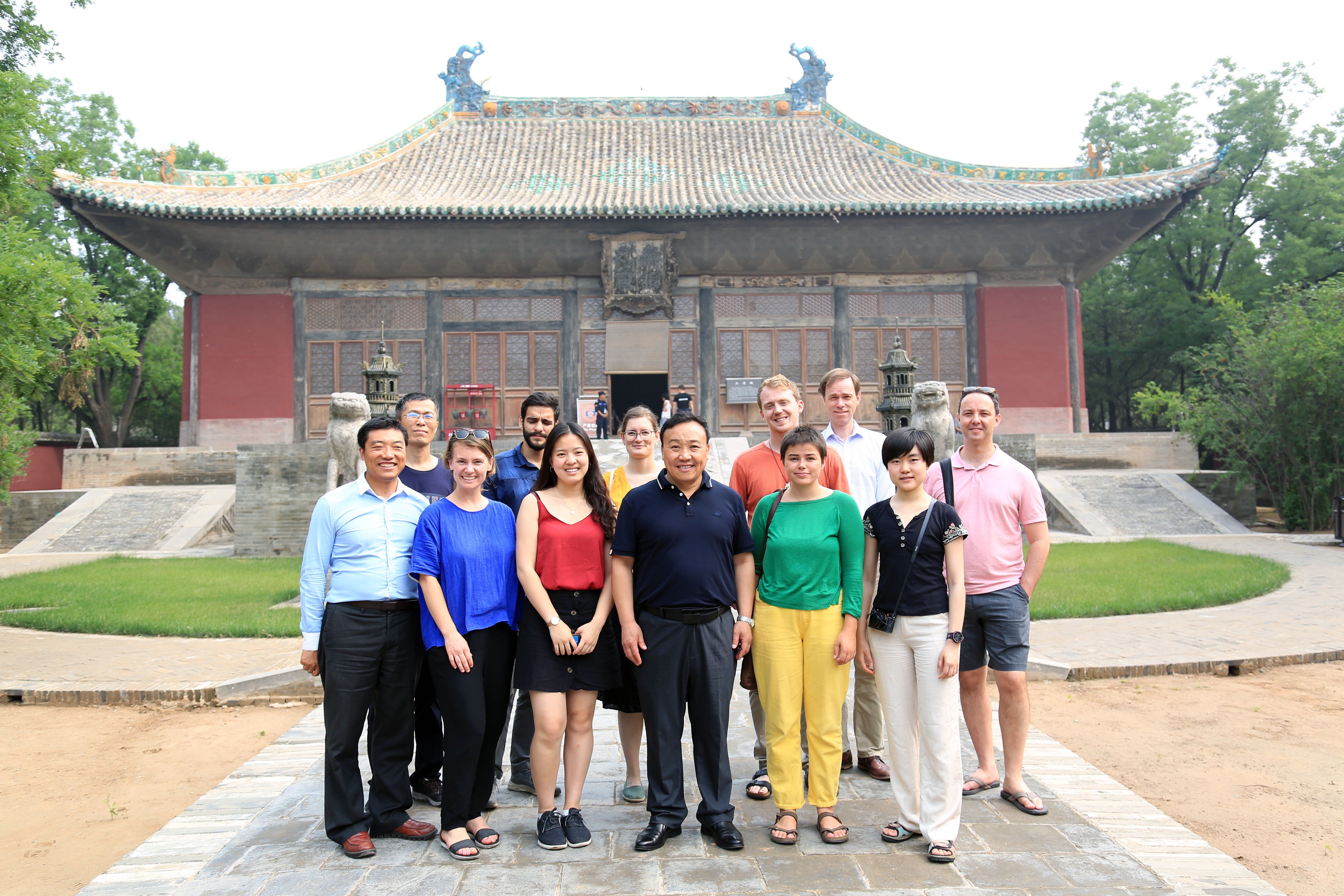 Visiting Yongle Palace with Deputy Governor Mr. Liu (center of the first row) in Ruicheng. It is one of the most important Daoist temples in China, constructed in the Yuan dynasty. (Photo credit: Xiyao Fu)

Without going into Ruicheng, it is hard to imagine the speed of change in a province whose energy system is still dominated by coal. By the end of 2015, the installment of “new energies,” including hydro power, wind power, solar power and gas, had grown to 20.8% of the total electricity installment in Shanxi. In the background of this shift to renewable energy, the coal industry has been suffering from overproduction and economic slow-down. By the end of 2015, the debt ratio of the five major coal groups had reached 81.79% and the loss of Shanxi coal industry reached 9.425 billion yuan. Shanxi government’s 13th Five Year Plan (2016-2020) predicts an annual growth of 30.6% in non-fossil energy and sets a goal to increase the share of non-fossil energy to 5% of the province’s total energy consumption. How many “Ruichengs” will it take to realize this ambition? Is distributed solar power needed alongside the massive-scale solar farms? In the end, Mr. Liu told us that he hopes more students and experts can visit Ruicheng and share their insights. Although Ruicheng is a small part of China, it amazed me how much can be achieved in a short time with the collaboration of the government, companies and local farmers.