Is China ready to take up a global climate action leadership role? Observations from Bonn

China’s message to the world at the latest UN climate talks was clear: its climate and emission goals would be honored, with or without the United States. But does that make China the new global leader in climate action?

After the Trump Administration promised to withdraw the US federal government from the Paris Agreement, many have turned to China as the new beacon of hope in global climate action in the post-Paris era. During the UNFCCC COP-23 climate negotiations held in November 2017, China set up various side events to showcase its achievements in domestic environmental governance and successes in climate action.  These events signal a complicated picture of China’s rise in climate leadership — China is stepping out ahead in terms of continuing its climate policies, but lags behind in terms of ramping up emission reduction ambitions and contributions to climate finance.

China’s commitment to address climate change remains unwavering. Government officials speaking at the China Pavilion’s side events during the 2-week conference reaffirmed China’s commitment to the Paris Agreement. Many invoked Chinese President Xi Jinping’s speech during the recent 19th Chinese Communist Party National Congress, where he declared China’s role as “an important participant, contributor and torchbearer” to building a “worldwide Ecological Civilization.”  Echoing President Xi’s rhetoric, “A Community of Shared Future for Mankind” and “Ecological Civilization” were catchphrases emphasized by Chinese representatives in the side events. Whether these new concepts actually add real value to global climate governance remains to be seen; what’s certain is environmental protection has been elevated to an unprecedented level of national priority in China.

But despite China’s commitment to tackle climate change, early analysis suggests its pledge may not be as ambitious as initially perceived. China’s emissions reduction promise in its Intended Nationally Determined Contributions (INDC), is “to achieve the peaking of carbon dioxide emissions around 2030 and making best efforts to peak early”. There is general consensus that China is well ahead of schedule to achieve this goal: a report in 2016 by the Grantham Research Institute on Climate Change and the Environment and London School of Economics argues that China’s emissions had already peaked in 2014; another 2017 study by the Global Carbon Project predicts that China’s carbon dioxide emissions would increase by 3.5% in 2017 and eventually peak in 2023. The timeframe of achieving its goals aside, Climate Action Tracker has rated this target as “Highly Insufficient”: even though China might be on track to meeting its Paris Agreement goals, these goals were not ambitious enough to begin with. 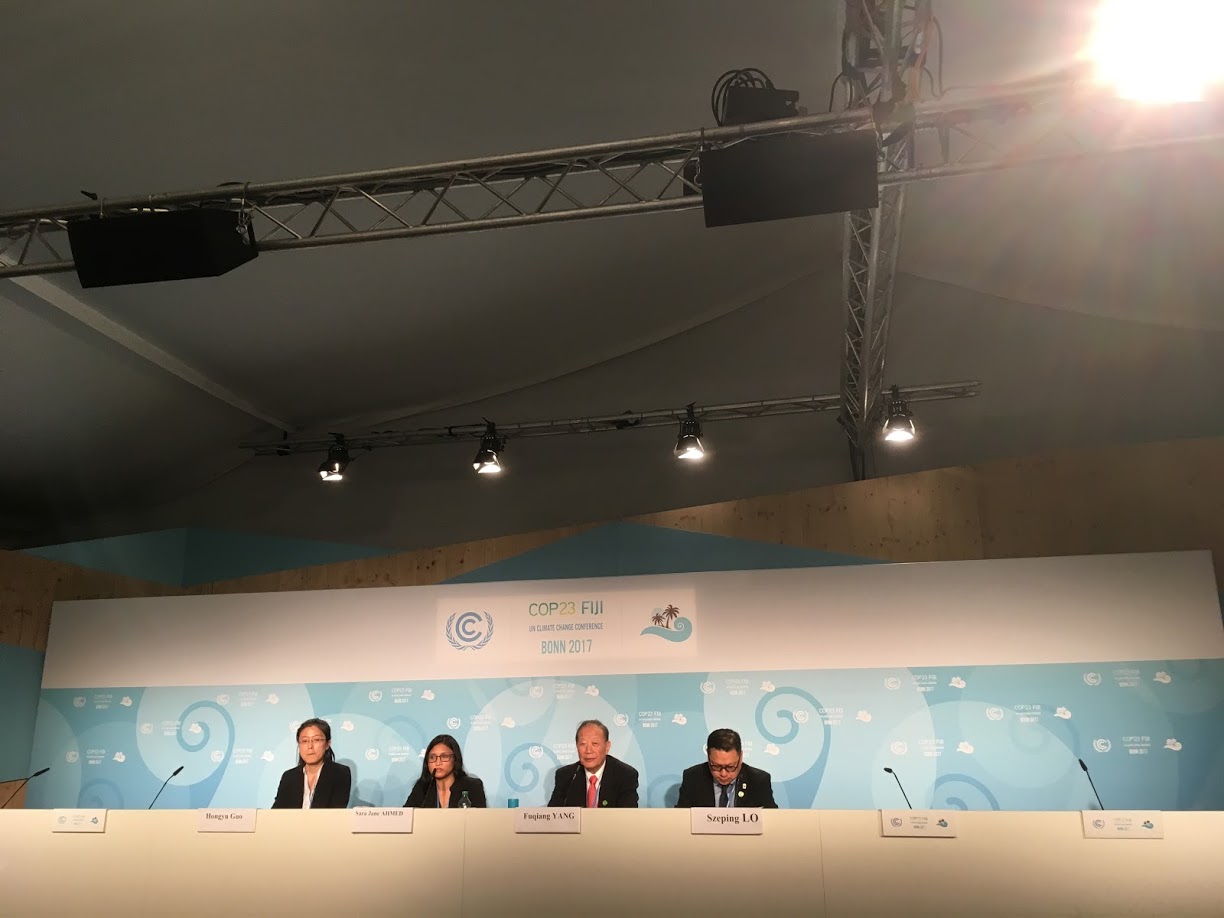 Belt & Road Initiative (BRI) Green Development Platform Press Conference at COP-23. It is one of many outward-facing events China organized during the latest round of climate negotiations.

COP-23 also demonstrated China’s increasing engagement in multilateral climate and environmental governance. This engagement, however, also has its caveats. The Belt and Road Initiative (BRI) Green Development Partnership, which held a press conference during COP-23, was a case in point. The partnership, which is the environmental arm of China’s flagship global trade initiative, serves to “provide policy recommendations for sustainable development [for projects in BRI countries]…by bringing together Chinese and international think-tanks, environmental NGOs, and foundations.” In theory, projects in a BRI country would be subject to an Environmental Impact Assessment, at least as stringent as Chinese standards, before being implemented. We are yet to witness or test the effectiveness of this nascent partnership in the broader context of BRI’s economic and geopolitical objectives, since the Chinese government explicitly uses BRI to export excess industrial capacities in sectors like steel and cement. There have been concerns that China is exploiting its overseas investment partners where environmental regulations are weak, virtually “leaking” emissions and pollution beyond its borders. The partnership could address some of this criticism by . Nonetheless, at this stage, the lack of solid evidence of implementation makes the green partnership feel more symbolic rather than actual.

The latest Bonn talks also left some important questions about China’s climate governance unanswered. Domestically, China did not roll out its nationwide carbon trading scheme during COP-23, despite widespread speculation. When the plan was finally announced in late December, the coverage of the carbon trading scheme had been drastically scaled back from eight sectors to only one – power generation. Internationally, while announcing the Green Development Partnership under its own trade initiative, China’s commitment to global climate finance still needs to be established more clearly, as details of China’s “South-South Climate Cooperation Fund” remain scant.

There are reasons to believe that China can do more to become the champion of global climate action. The Energy Saving and Pollution Reduction Plan of the 13th Five Year Plan was released in December 2016 and laid out a nationwide environmental masterplan to cut pollution and emissions by 2020. Bearing in mind that China’s national climate action plan, or Intended Nationally Determined Contribution (INDC) was submitted in June 2015 during the 12th FYP, the latest planning cycle could yield emission reduction results that can surpass pre-Paris levels of ambition. Given the predictions that China has peaked emissions, and has made ahead-of-schedule progress in other areas such as emissions intensity, forest stock volume, increasing emission reduction ambition is realistic. Announcing increased ambition can also influence how other countries approach their INDCs: prior to COP-23, China had made it clear that it was firmly against raising mitigation ambitions of developing countries. As the biggest economy in the “Like-Minded Developing Countries” climate negotiation bloc, if China could soften its stance at the Global Stocktake of collective efforts in the Tanaloa Dialogue in 2018, the ripple effects for the rest of the emerging economies would be huge.