China in Copenhagen Day 5: No Country is an Island

By Angel Hsu and Christopher Kieran, part of ‘Team China’ tracking the Chinese delegation a the Copenhagen climate negotiations. This post was originally featured on Green Leap Forward. 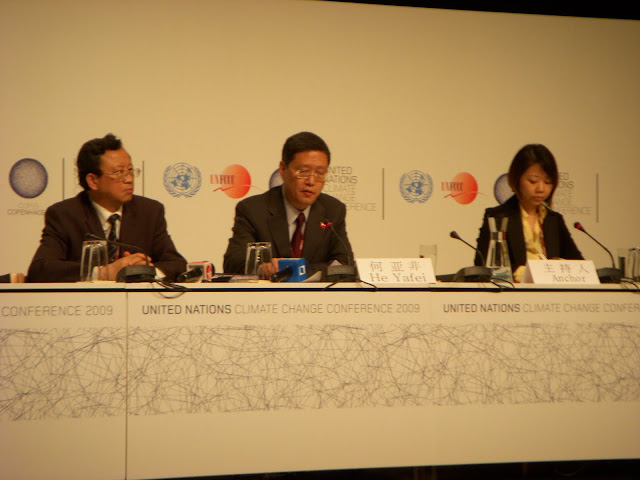 Plenary sessions were closed off to observers today, which means that we unfortunately cannot beat the Earth Negotiations Bulletin with insights as to what went down on the negotiating floor. Nonetheless, we were able to get quotes from Vice Minister of Foreign Affairs He Yafei (seated center; on his left is Yu Qingtai, a leading negotiator in the Chinese delegation) – the highest level Chinese government official that has spoken to date (Premier Wen Jiabao is expected next week). We also acquired the text of the big proposal that hit the COP today: “The Copenhagen Protocol” from the Alliance of Small Island States (AOSIS).

On the question of “measurable, reportable, and verifiable” (MRV) actions for developing countries (He showed his climate policy prowess by referring to a reporter’s question on “verification” by saying, “You mean MRV-able? I think I just made up that word.”), Vice Minister He first referred back to the Bali Action Plan, which was agreed to by all Parties of the UNFCCC and does not require MRV for developing countries. While sticking to his guns regarding the Bali Action Plan, he said, “It doesn’t mean China would not do what it promises, we’re very serious about it [climate change mitigation actions].”

He then reaffirmed what we mentioned yesterday with regards to “auditing, supervision, and assessment” (ASA) laid out in the BASIC text. He said:

What we have committed to do would first go through our own legal process. There will be a legal guarantee domestically. We’ll also have a regime for statistical supervision domestically. We’re also willing to increase transparency by publicly announcing the results of our actions in reports coming out of China. We’ll certainly do it. There are no problems for transparency. But there will be no MRV internationally because it’s a matter of principle.

Even though we noted in our previous post that this was a significant position for China to take, the reaffirmation by Vice Minister He and the use of the words “transparency” and “publicly” demonstrate a high-level commitment to ensuring that China’s actions to address climate change are credible. He also made a point that these actions are not much different from what current developed countries do (check out this WRI report on National Communications and MRV).

As the MRV question is one of the issues ‘Team China’ initially set out to follow, this announcement by Vice Minister He is particularly exciting, when we first drafted our report, China was opposed to MRV of domestic developing country action and commitments. This is an important step for China and it represents recognition of concern from developed countries that the money they put to developing country actions will be used with integrity. However, will this be enough for developed countries? In particular, will the U.S. be satisfied with the domestic ASA put forth by the Chinese, especially given their Bangkok proposal to require all Parties to MRV their nationally-appropriate actions and commitments?

2) No Country is an Island … except if you’re one of the 43 island states represented in Copenhagen. 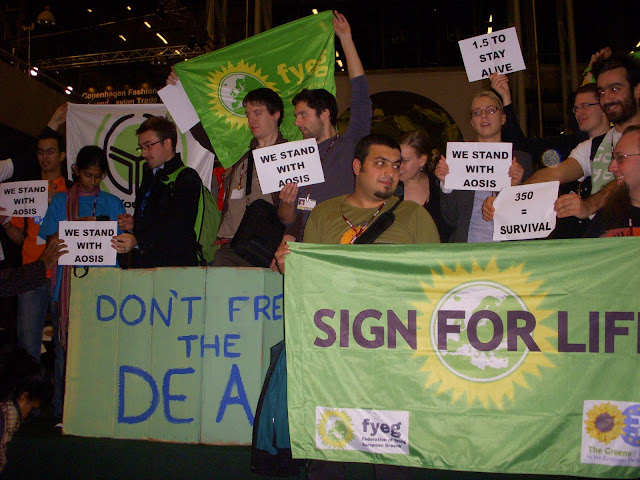 As we’ve mentioned daily since the Tuvalu snafu on Wednesday, we’ve witnessed a rift on the negotiating floor between China and the G-77. Today, the Alliance of Small Island States, or AOSIS (supporters of whom are pictured left), announced its proposal, embedded below. The AOSIS proposal incorporates elements of the Tuvalu proposal for a “Copenhagen Protocol.” However, one notable omission from the AOSIS proposal is Annex BI, an additional annex proposed by Tuvalu as an amendment to the Kyoto Protocol. Annex BI parties would be non-Annex I parties that opt into the annex. By opting into Annex BI, a non-Annex I country (meaning developing countries like China and countries with economies in transition like Mexico) would take on commitments. This would open up China to increased pressure to make commitments. The AOSIS proposal’s omission of the amendments creating Annex BI probably reflects a sensitivity to the strong position China has taken here at COP 15, i.e. to preserve the clear distinction between Annex I and non-Annex I countries, as is the case in the Kyoto Protocol. Ambassador Dessima Williams of Grenada was quick to state that the AOSIS proposal ensures “the survival of the Kyoto Protocol.” Preserving and strengthening the integrity of the KP has been repeatedly stressed by China this week and constitutes a core element of their position. AOSIS definitely wants China’s support.

But there are some technical elements of the proposal that China has never expressed support for:

(b) AOSIS has held onto Tuvalu’s limit of 1.5 degree temperature rise and 350 ppm maximum for atmospheric CO2 concentration. China has expressed support for a 2 degree maximum and has never supported 350 ppm.

The main question is whether China will view the proposal as a threat to the Kyoto Protocol, despite clear statements from AOSIS that it strengthens the KP. It’s possible China won’t support any protocol coming out of the AWG-LCA, no matter what it looks like. China thinks every issue can be addressed within the AWG-KP. This is reflected in the BASIC text, which would put an end to the AWG-LCA within six months.

Vice Minister He did have a few points to make regarding the small island states. First, in response to China’s reaction to the Tuvalu and AOSIS proposals, he diplomatically avoided specifics but did say, “We [small island states and China] may not see eye to eye on some specific aspects. However, developing countries as a whole have the same view. The key to success is for developed countries to deliver. It’s time to deliver.” With these strong words, he continued to express China’s support of small island states, which he noted are the most vulnerable to climate change.

Fielding the question again as to what his reaction to US special envoy Todd Stern said with regards to no financing money for China, Vice Minister He was “shocked” by Stern’s statement and called it “lacking common sense or completely irresponsible,” reiterating what Vice Minister Yu Qingtai said the other day: absolutely, financing should first go to the small island states. He then reacted to another reporter’s question asking what he thought of the EU’s pledge today to commit $3 billion USD to a short-term climate fund by saying that this amount is not enough. “Ten billion is not enough,” the Vice Minister rebuffed. It is commendable that China is taking such an active role in trying to secure adequate financing to assist small island states in adapting to the consequences of climate change, outspokenly foregoing their piece of the pie in favor of small island states.

When we asked a colleague who has been working closely with Islands First (an organization that works closely with the UN missions of small island states and that has been assisting many of their delegations here), what he thought of Vice Minister He’s statements, his reaction was quite surprising. “For the islands, it’s not about the money,” he told us. As Tuvalu negotiator Ian Fry said Wednesday, it becomes a question of national existence for these island states. All of the billions and trillions in the world won’t do a darn thing if your country is drowning or, worse yet, no longer exists. For the small islands, the focus should be on drastic emission reductions and not a price tag for their existence.

It’s a fair point to which we haven’t yet heard an adequate response.

‘Team China’ is sad to say goodbye to Christopher Kieran tomorrow, but we’ll pick up after a short respite this weekend.

Note from Julian: Thank you so much, Chris! Safe travels and good luck!