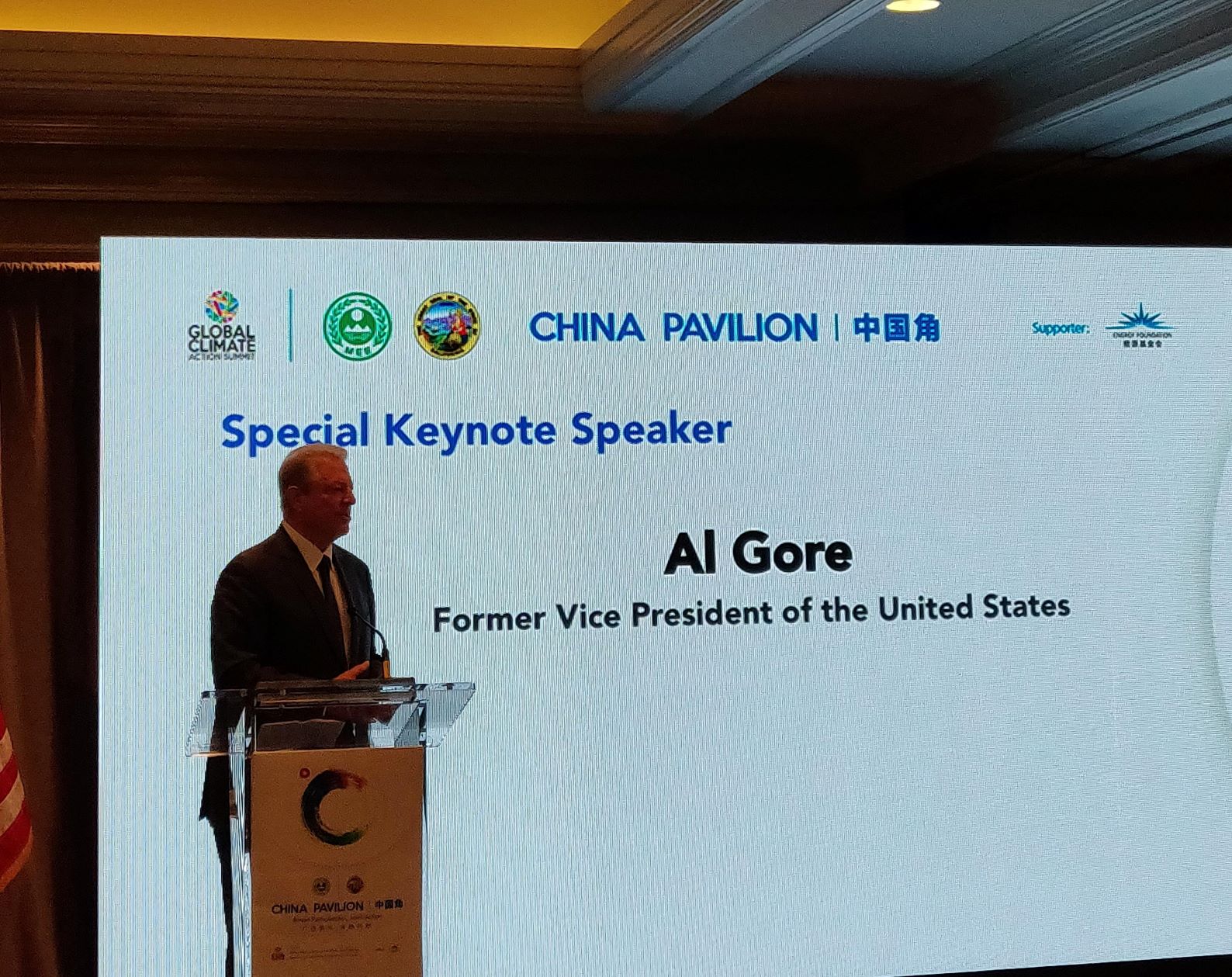 When the U.S. administration first declared its intention to withdraw from the Paris Agreement, it threatened to unravel a relationship between the world’s two largest climate emitters that was key to securing the agreement in the first place. Worried observers may be able to breathe a sigh of relief, however, as California Governor Jerry Brown has stepped in to fill the leadership void. The Global Climate Action Summit (GCAS) was held this past September in California to celebrate climate achievements and promote greater ambition of states and regions, cities, businesses and investors. Alongside the main events, a high-level delegation from China led by Xie Zhenhua, one of the six co-chairs of the summit and China’s Special Representative on Climate Change, held parallel discussions that featured government and business leaders to showcase what they’re doing on a range of topics from air pollution, green finance to carbon trading.

The tide was already starting to shift before the Summit when California Governor Jerry Brown met with President Xi Jinping of China in June 2017 — an unprecedented meeting between the head of a State (i.e., China) and the head of a state. During those talks, Brown put forth climate change as a top agenda item. At the GCAS China Pavilion, Governor Brown once again showed his keen engagement with China on the issue of climate action, delivering a keynote address and witnessing the signing of a series of Memorandum of Understandings (MoUs) that promoted clean technology and electric vehicle research between Chinese cities, universities and businesses and California. 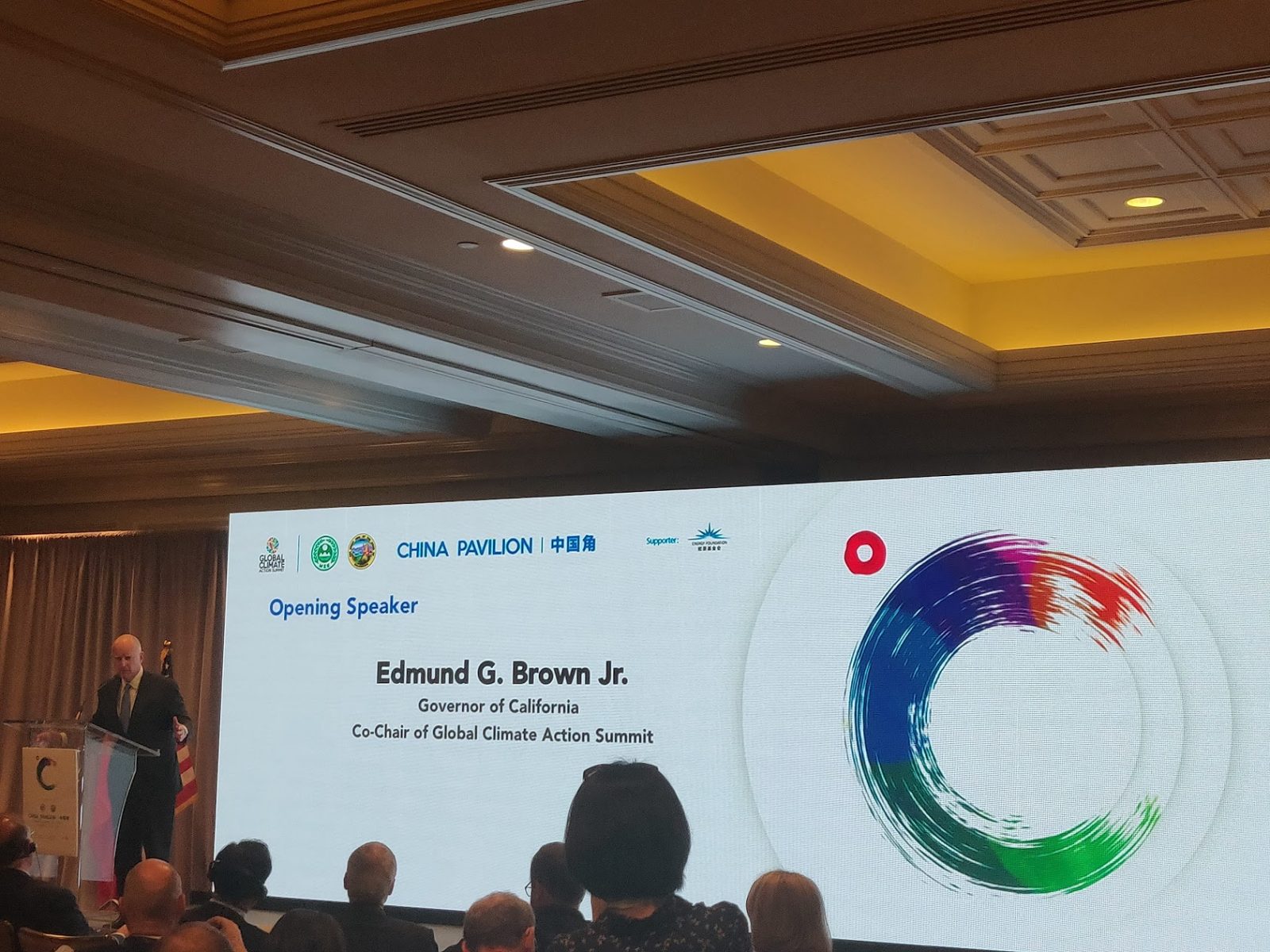 The bilateral partnerships on display at GCAS were a testament to a long tradition of collaboration between California and China. Governor Brown’s trade mission to China in 2013 has sown the seeds of many cooperation projects. Besides engaging directly with the central government, California government and Californian institutions have worked with provinces and cities across China on a range of climate-related topics. Li Xiaohua, Director of International Cooperation Affairs at Beijing Municipal Environmental Protection Bureau (EPB), credited California Environmental Protection Agency (CalEPA) for assisting with Beijing’s effective air cleanup campaign. CalEPA, which has years of experience dealing with air pollution issues, trained Beijing EPB staff, and was impressed by the speed at which Beijing achieved its air quality goals. Shenzhen’s carbon emissions trading market, one of the first climate pilot projects in China, also borrowed design ideas from California’s carbon market in its early stages. From the business side, BYD, a leading Chinese battery and electric vehicle manufacturer, built a electric bus and battery factory in Lancaster, California, and plans to expand the facility to increase production.

Also present at the China Pavilion were Chinese philanthropies and businesses. Wang Shi, CEO of Vanke, a leading Chinese real estate developer, who is also Chairman of Vanke Foundation, represented the China Business Climate Action Initiative. This initiative, which encourages businesses and industries to incorporate climate change into their corporate social responsibility and overall strategy, includes 800,000 participating entities from industry associations like China Chain-Store & Franchise Association and China Textile Industry Federation. Announcing the Initiative at GCAS was both a rallying cry for more Chinese businesses and industries to participate, and a collective statement made by Chinese businesses and NGOs which have been largely underrepresented on the international stage (see our latest report on global climate action from cities, regions, and businesses).CCC

One reason for the lack of participation we observed in our report regarding China’s cities and businesses in international climate initiatives and reporting platforms is due to the vertical nature of China’s governance system. Top-down policies like China’s 13th Five Year Plan has set a series of energy and carbon reduction targets for provinces and cities, which then get allocated down. In July 2018, the State Council also released the “Three Year Action Plan to Defend the Blue Skies,” the second phase of China’s air pollution masterplan. The updated plan sets air quality targets for a greater number of cities, articulates greenhouse gas emissions reductions targets, and provides measures to control pollution sources through promoting industrial and economic restructuring. Recent consolidation between climate change and air pollution reduction responsibilities are consolidated under the newly reformed Ministry of Ecology and Environment should further integrate and help local actors better target these two issues in tandem. During a panel event at the China Pavilion, Xu Huaqing, the Director General of National Center for Climate Change Strategy and International Cooperation was optimistic that the new administrative structure could improve policy coordination and promote co-benefits in environmental regulations.

Despite the positive developments showcased at GCAS, there are still unresolved questions about the future direction of its climate policy. China’s Nationally Determined Contribution (NDC), submitted in 2015, was found to be “highly insufficient” to limit warming to 2°C by Climate Action Tracker, let alone the 1.5°C target. Grantham Research Institute on Climate Change and the Environment and London School of Economics report posited that China’s emissions may have peaked as early as 2014, but there was an uptick in 2017 because China’s energy consumption and oil demand are still rising, even as coal consumption is falling. During a time when China’s economic growth is slowing down, the Chinese government will need to balance economic growth with its environmental and climate objectives.

Scholars and even Chinese officials have commented that China has the potential and right conditions to ratchet up its NDC. While China may have the capacity to increase its ambition level, doing so is politically risky: international declaration (which may be binding) of more aggressive targets may have economic tradeoffs, and will change China’s standing in the Like Minded Group of Developing Countries climate negotiations block. The upcoming 24th UNFCCC Conference of Parties (COP-24), where countries will meet to work out the details and rules of the Paris Climate Agreement, and inform the preparation of the next round of NDCs will be a key moment to see if, and how efforts from China’s national, provincial, and local governments, along with its private and civil sectors, subnational and non-state might translate to higher ambition for China’s NDC.